Air freight: the market balance is very provisionally favorable to the airlines

Global demand for air freight fell by 15.2% in March, while capacity was down 22.7%. Logically, prices have soared on certain routes. But the trend is very temporary and largely insufficient to help airlines which are fighting to survive.

The reversal of the downward price trend has a bitter taste. Air freight prices are increasing as a result of difficulty getting access to capacity on certain routes. According to the Upply data base, the increase in freight rates ranges from 19% to 40% on certain trade routes, notably between Asia and Europe, Europe and North America and Europe and the Middle East. The trend has been confirmed in April, moreover, as is shown by the Upply graph below for the Asia-Europe trade corridor. 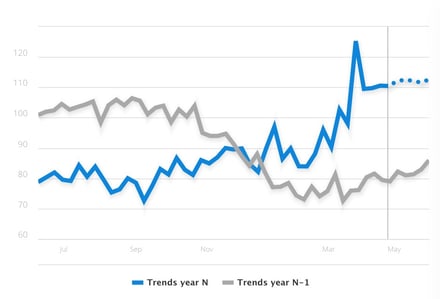 This is small consolation, however, for airlines which are fighting for their survival. According to IATA data, global freight demand fell by 15.2% in March (15.8% on the purely international market) as a result of the Covid-19 epidemic which is affecting many economies. Overall, in the first quarter, traffic fell 7.7% overall and 7.8% in the purely international segment. Among the main markets, Europe and Asia-Pacific were the worst affected. North America has started to decline but with a time lag. The fall in traffic there should, therefore, be more marked in April.

Capacity down in emergency conditions

Despite the contraction in demand, pharmaceutical products and medical equipment required for the fight against the coronavirus epidemic are being transported as part of an emergency response which is maintaining prices on routes where demand for these products is concentrated.

A drastic reduction in capacity is also contributing to the sharp increase in prices. In March, capacity shrank by 22.7% overall and by 24.7% in the international segment, which represents 87% of all air freight capacity. With passenger traffic at a virtual standstill, hold capacity on international passenger flights was reduced by 43.7%. This reduction has been only partly compensated for by a 6.2% increase in all-cargo capacity, including freight capacity made available in the cabins of passenger aircraft. Altogether, load factors improved by 4.8 points in March.

Aside from this favorable supply and demand ratio, airlines also benefited on some routes from capacity reductions made by some shipping companies.

These various factors put very much into perspective the positive side of the increase in freight rates for the airlines. For the time being, they are having to juggle with tortuous operating conditions to try to get minimal benefit from the potential offered by the air freight business. In its March air freight results announcement, IATA calls for a reduction in administrative formalities for charter flights, exemption from quarantine regulations for crews carrying out cargo flights and guarantees that suitable personnel and facilities will be available to handle freight.

In the longer term, the prospects are frightening for airlines which are already in a severely weakened state. Air freight depends massively on the state of the world economy. Manufacturing industry has been severely restrained. The global manufacturing Purchasing Managers' Index, which slumped in February, recovered slightly thanks to the first signs of renewed activity in China but was still down overall, reaching record lows in Europe and the United States.

"Looking at the prospects for the rest of 2020, the World Trade Organization forecast gives little indication of a quick recovery," IATA said. "The optimistic scenario is for a 13% fall in trade in 2020, while the pessimistic scenario sees a 32% fall in trade in 2020. This will deeply impact air cargo’s prospects." It is true that IATA's economists find that, so far, the impact on traffic has been less serious than during 2008 financial crisis but the range of factors which need to be taken into account to manage the current health crisis seems to be infinitely more complex.