An increase in transportation prices, a factor for inflation in 2021?

At a time of massive stimulus packages in the United States and Europe, inflation is once again a topic of reflection for 2021. The evolution of transportation prices is one of the elements to be watched.

As we have seen in post-war periods, after a negative supply shock, a strong economic recovery creates an inflationary environment. Central banks inject liquidity into the economy by printing money and keeping interest rates low, to help rebuild the productive apparatus and support struggling businesses. The increase in the amount of money is then greater than that of the supply of available goods which leads to a general increase in prices.

Increase in inflationary pressure in the United States

In a way, the current situation is similar to post-war periods. In the U.S., the American President Joe Biden has promulgated an historic new $1,900 billion stimulus package that will amount to nearly 10% of the U.S. GDP. This plan will massively support households, small businesses, and local authorities. It could enable an increase in U.S. production of between 3% and 4% over the next 12 months, according to OECD estimates. This is good news for economic recovery, but these massive measures could also lead to a general increase in prices. The IMF is forecasting a 2.1% rebound in U.S. inflation in 2021 and 2022, with a growth in GDP of 6.5% according to the U.S. Federal Reserve.

As for the European Central Bank, it is expecting only 4% economic growth for the euro zone in 2021, but with disparate situations between countries. However, the U.S. and European central banks do not share exactly the same objectives. The primary objective of the ECB is to maintain price stability and keep inflation below 2%. This inflation is measured by the Harmonized Index of Consumer Prices (HICP), which reflects average household spending on a basket of products in the euro area. The ECB is forecasting inflation of 1.5% for 2021, 1.2% for 2022 and 1.4% for 2023. For the component not including the price of energy and food, inflation expectations rose from 0.7% in 2020 to 1.3% by 2023. As a result, the ECB has the flexibility to maintain an accommodative monetary policy that favors relatively low interest rate credit conditions.

Beyond the similarities with post-war periods, the current situation however presents a fundamental divergence: the productive apparatus has not been destroyed but has simply lain idle, due to economic restrictions aimed at combating the Covid-19 pandemic. If consumer spending increases, overall production capacity will be largely sufficient, except for the semiconductor sector, which is experiencing chronic shortages. China, considered as the "world's factory", did not experience a recession in 2020 but simply a reduced growth (+ 2.3%). For 2021, forecasts show an increase of 8.1%, which is far from being a phenomenon of overheating.

A key question for the year 2021 is this: will the risk of inflation result from strong GDP growth accompanied by a fall in unemployment and an increase in consumption, or conversely from exogenous factors that lead to higher production costs? A certain level of inflation is bearable if it is the corollary of strong economic growth. On the other hand, the highest possible level of vigilance is required if the rise in prices is the consequence of the increase in the costs of skilled labor, energy, raw materials, transportation, and a rise in the cost of production, following new health and environmental standards.

The initial observations are rather worrying concerning the price of inputs. According to spot prices traded on the New York, London and Paris stock exchanges, crude oil (WTI) has increased by 105% over the past 12 months, copper by 75%, wheat by 19.5%.

In terms of transportation, Upply's data reveals an increase of 91% in transaction prices for container maritime shipping on the Asia-Europe corridor over the period of February 2020 to February 2021. For the export prices for a container leaving mainland China, the CCFI index shows an increase of 120% over this same 12-month period. Taking into consideration all of the surcharges, price levels are at all-time highs for many destinations.

The trend is the same for the international air freight sector with an increase of 61% on the Asia-Europe corridor between February 2020 and February 2021.

The increase is less marked for the road sector, and rather symptomatic of specific conditions, such as border congestion linked to measures to fight the pandemic and / or Brexit in Europe, or for example the congestion at ports in the United States. 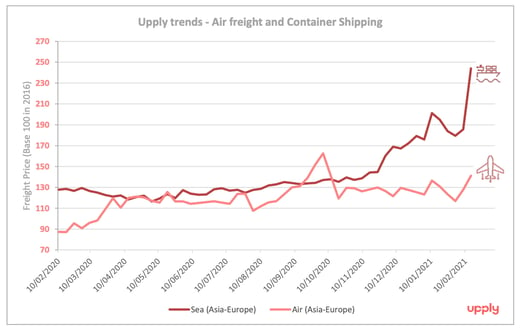 The end to negative interest rates is forecasted

On the other hand, on the financial markets, players are already anticipating a higher rate of growth in Europe in the second half of 2021, supported by an improved health situation and the easing of restrictions on the economy. The first consequence is a gradual return of confidence and the search for assets that are a little riskier but which offer a better return. The graph below therefore shows a slight steepening of the yield curve in Europe, both for issuers with low credit risk (AAA) and for all sovereign bond issuers. For loans of less than 10 years, there are still credit conditions in negative territory for sovereign issuers with the lowest probability of default, but this anomaly in the history of financial theory is likely to disappear during the year. The overall picture on long-term borrowing rates is therefore far from alarming. 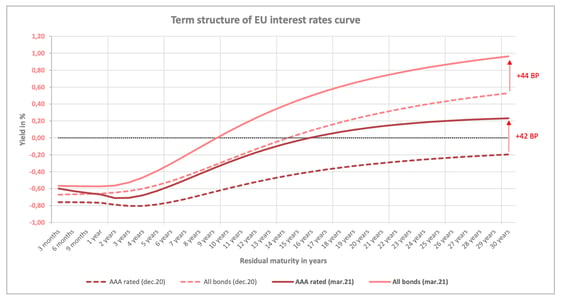 Source : BCE, Upply -The borrowing rate is determined by the level of credit risk represented by the debt issuer and the duration of the loan. The better the credit quality (AAA rating), the lower the probability of default. So, for short-term maturities, sovereign issuers considered to be “risk-free” have obtained low borrowing conditions and sometimes a negative rate for technical reasons since the 2008 financial crisis.

Over the next few quarters, the action of government policies could also maintain favorable credit and investment conditions in the medium term in order to accentuate a “Schumpeterian recovery”. Both at European and national levels, economic stimulus plans could be a source of financing for businesses, whilst also offering lower borrowing rates for a selection of investments in innovation or technological progress that favors gains in competitiveness.

How to protect yourself in this context?

For a business, it is important to protect its sources of supply of raw materials and energy, but also to avoid any risk of rupture in the Supply Chain as we have seen happen during the year 2020. The greatest attention should be paid to the supply of semiconductors and to the purchase of strategic raw materials such as “rare earths”, which are involved in the production of new technologies or in the electric car industry.

In terms of financial equilibrium, it is essential to guarantee refinancing conditions and to take advantage, if necessary, of still favorable conditions to borrow at fixed rates over the long term. In terms of profitability, protecting operating margins is a crucial issue in an inflationary context. The primary tool is cost control and better anticipation in inventory management. The second tool is the adoption of hedging mechanisms against price and exchange rate volatility by using financial instruments or new digital solutions.

Furthermore, in this context, it is absolutely essential to pay particular attention to pricing strategy, and as such start by closely monitoring the evolution of costs. This is the prerequisite for a company to be able to progressively integrate the inflationary pressures of inputs into its selling prices, and thus defend its pricing power. Encouraging a reduction in the ecological impact of operations and sales is also a good way to maintain margins and market share while complying with new environmental regulations.