In the first half of the year, the Brexit did not generate the predicted catastrophe, both in terms of volumes and the fluidity of transport operations. Above all, it has led to a redistribution of the cards for services to the United Kingdom and Ireland. But today, the disorganization of supply chains is becoming apparent.

In both directions, trade between the European Union and the United Kingdom fell into the doldrums in January 2021, before recovering. The results should however be looked at with caution because in the 2nd quarter of 2020, the level of activity had been considerably affected by the health restrictions taken to fight against the first wave of Covid-19. The growth observed in the second quarter of 2021 compared to the previous year therefore reflects more of a catching-up phenomenon than any real progress.

On the other hand, as pointed out by Eurostat the figures are impacted by a change in methodology linked to the UK's exit from the EU. But one thing is certain: trade between the EU and the UK, whilst not actually collapsing, is not taking full advantage of the positive trade dynamics seen in 2021 either.

During the first six months of the year, i.e. after the end of the Brexit transition period, the European Union's imports from the United Kingdom fell by 18.2% in value, amounting to €65.9 billion, against €80.6 billion for the first half of 2020, according to Eurostat data. In contrast, EU exports to the UK rose by 5.5% to €135.5 billion.

These developments are much lower than those observed for trade between the EU and countries outside of the United Kingdom. Overall, in the first half of the year, European Union exports of goods to other countries increased by 13.8% compared to the same period of 2020, reaching 1,048.9 billion euros. Imports increased by 13.9% to €964.5 billion. Similarly, trade within the European Union increased much faster as it grew by 21.2% compared to January to June 2020, reaching €654.2 billion, indicates Eurostat.

The figures released by the UK's Office for National Statistics (ONS), even though they differ partly from those released by Eurostat, show a fairly similar development in UK exports: +9.3 % to the European Union and + 8.4% to other countries. On the other hand, imports from non-EU countries recorded a much larger increase than those from the EU (+ 21.7% against + 2.5%).

The ONS noted, however, an overall downturn at the end of the semester, despite an increase in exports to the EU in June compared to May, exports outside the EU declined over the same period. This trend could be explained by an easing of the lockdown measures put in place at the beginning of the year, but also by a resumption in European orders, with stocks that were brought in as anticipation for Brexit starting to run out. Most categories of products have benefited from this, but more particularly the chemical sector and especially drugs and pharmaceuticals in connection with the development of vaccines against Covid-19. The increase in imports from the EU was driven by the automotive sector. UK exports in this sector, on the other hand, have been hampered by the global shortage of semiconductors.

The first days of Brexit were particularly dreaded, after a tense month of December: during this pre-Christmas period, flows were very dense because companies wanted to build up stocks on a massive scale before the deadline. At the same time, the border closure decided by France on December 20 in an attempt to stop the spread of the new Delta variant aggravated the congestion. “For the Short Straits market and cross-Channel logistics chains, the beginning of 2021 was marked by the need to adapt to the new post-Brexit administrative rules as well as by the obligation, introduced at the end of 2020, to present negative PCR tests of less than 72 hours carried out on British soil for trucks entering France ”, underlines Getlink, the operator of the Channel Tunnel truck shuttles, in the presentation of its financial results for the first half of 2021.

Flows between Europe and the United Kingdom did indeed slow down a bit at the very beginning of January, but the situation finally normalized fairly quickly.

Some administrative problems still persist: “Concerning exit declarations, 15% are not cleared. Apart from technical problems that are still being resolved, the main cause is the non-presentation or partial presentation of the Export Accompanying Document (EAD) ”, indicates the FNTR in a Brexit report drawn up in July. The European lobby of freight forwarders is a little more nuanced. "Our members still witness a lack of awareness of border formalities and processes among parties in the logistics chain, causing significant operational issues, tax risks and risks of non-compliance", declares Clecat in a briefing document published last May on the Implementation of the EU-UK Trade and Cooperation Agreement. However, it is the consensus between all the sector's players that the feared congestion did not take place.

The French Ministry of Agriculture, in a press release published in mid-July, also welcomes the smooth border crossing for products subject to sanitary and phytosanitary controls. Since January 1, 2021, more than 44,000 consignments have been checked at border control posts (PCFs) on the Channel - North Sea coast mainly in Calais-Boulogne (83%), Dunkirk (8%) and Caen-Ouistreham (8%). The goods controlled are mainly animal products (85%), and live animals (11%), plants and animal feed of non-animal origin representing respectively 3% and 1% of controls. “Since January, the Brexit activity represents 45% of the activity of the French PCFs, including 74% of all controls of live animals and 69% of all controls of products of animal origin. Over the first 6 months, nearly 500 consignments, or 1.33% of the goods controlled, were refused entry into European territory because of the non-conformities detected during the control”, specifies the ministry.

Even though the operational disaster did not occur, flows are still lagging behind, without it being possible to determine precisely whether the phenomenon is more down to Brexit or the health crisis. “Flows returned to normal and have reached 90% -95% of 2019 levels. For export flows, there are hardly any empty vehicles, while in the opposite direction, we see that 50% of the trucks are running empty”, estimates the FNTR.

Getlink estimates the decrease in activity on the Short Straits Cross-Channel market at -2%. The company, which claims a 38.9% market share for Truck Shuttles, for its part recorded a 3% drop in traffic compared to 2020 with a total of 646,372 trucks transported in the first half of the year.

According to the shipping company DFDS, demand is high, but is being hampered by the shortage of lorry drivers and equipment, particularly in the UK. Demand is actually exceeding capacity, which has led to "an increase in transport prices, longer delivery times and lower reliability of logistics chains, to which is added a phenomenon of congestion in certain ports", states DFDS, specifying that this imbalance between supply and demand is continuing during the 3rd quarter.

The rise in prices is indeed significant, in particular in the direction United Kingdom to the European Union, as our Upply index illustrates. 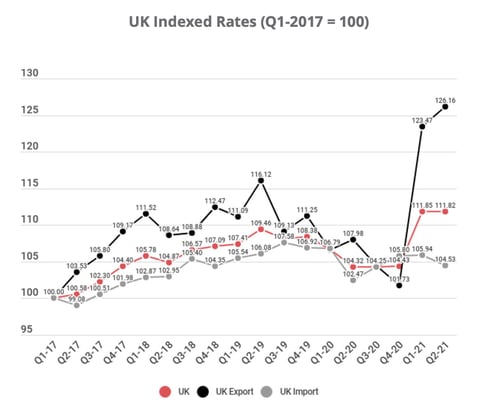 The UK's Road Haulage Association confirms this diagnosis. In a report on driver shortage published in July, the RHA estimates that the shortage is now standing at more than 100,000, against 60,000 before the pandemic. The Covid-19 epidemic has had an impact on several levels. Firstly, foreign drivers have returned home because of the periods of lockdown or travel restrictions, and "the vast majority have not yet returned," says the RHA. On the other hand, the number of slots for organizing professional driving aptitude examinations have been considerably reduced. While it is not the only factor leading to the shortage, Brexit has nevertheless played a role: due to the uncertainties about their right to reside and work in the United Kingdom, many foreign drivers are giving up.

In the first half of the year, the system held up, but since August, stock-outs have been on the increase.

For shipping companies, Brexit was synonymous with a reshuffling of the cards. First of all, it motivated the strengthening or opening of new routes to Ireland. In France, the ports to the West of the English Channel seized this opportunity. Brittany Ferries has expanded the offer from Roscoff and launched a dedicated freight rotation from Cherbourg to Rosslare. Stena Line has also developed its freight capacity with a new link between Dublin and Cherbourg.

The Eastern part of the Channel is no exception. DFDS has positioned itself on a Rosslare from Dunkirk link since January 2nd. This has proved successful since the company added a 4th vessel since April, the Ark Dania. A Ro-Ro type vessel with a large capacity, which makes it possible in particular to develop the traffic of unaccompanied trailers. “The route provides carriers and shippers with a direct, document-free journey for lorries between the Republic of Ireland and other countries of the European Union, implying less waiting times as well as the possibility of avoiding the customs procedures which now apply to transport via the British "landbridge", underlined the port of Dunkirk in a press release issued on the occasion of the launch of this service. This port has not simply focused on ferries. It has also strengthened the short sea shipping network. In November 2020, the shipping company Containerships launched a weekly service to Ireland with a 900 TEU vessel equipped with 204 refrigerator sockets. It carries out a Dunkirk / Dublin / Cork rotation. Since January, Containerships has also expanded its offer to the United Kingdom, still departing from Dunkirk. An 800 TEU vessel now serves Liverpool and Bristol.

On the cross-Channel route, the port of Calais is obviously still a must. On July 12, DFDS opened a new daily route to Sheerness dedicated to unaccompanied trailers. In August, the Danish operator put a new ferry on the Calais and Dover route. The Côte d'Opale offers 78% more capacity compared to the ship it replaces, with a total of 3,100 linear meters. The market also whetted the appetite of Irish Ferries, which launched a service in June on the Calais-Dover route. The response from the two market leaders was not long in coming: DFDS and P&O Ferries have announced that they have entered into a mutual space charter agreement, which will come into effect on or about October 1st, 2021. Under this agreement, freight drivers will be able to arrive at the port of Dover or the port of Calais and board the next available vessel, whether the ferry is operated by P&O or DFDS. Finally, a new kid on the block has announced its arrival: Blue Channel Line, a new shipping company created on the initiative of three entrepreneurs from Calais, is preparing to launch from October 1st a Calais-Tilbury link. The rotation, dedicated to unaccompanied freight, will be provided on the basis of a daily return trip from Monday to Saturday, with a vessel capable of accommodating 100 trailers.

The reorganization of the offer is therefore underway, in a market that remains uncertain. On the one hand, the Covid-19 pandemic may have produced specific conditions or masked certain effects, which makes it difficult to measure the exact consequences of Brexit on trade volumes. Then, we must not lose sight of the fact that Brexit has not yet shown its full impact. The UK will phase in full import border controls by January 1st 2022, with in particular additional requirements starting from October 1st 2021 for certain goods subject to sanitary and phytosanitary controls. On the other hand, European road drivers will have to have a passport by the same deadline of October 1st, an identity card will no longer be sufficient. The operational situation will therefore still have to be closely monitored in the coming months.


Graduated from the Lille school of Journalism, Anne has worked for 25 years for trade & logistics magazines and websites, before joining Upply.

China-Europe Rail Freight: Review of the First Semester of 2021