The year 2022 marks the end of the post-pandemic economic recovery cycle, against a backdrop of skyrocketing inflation. A look back on 5 major trends to follow for the world of freight transport and supply chains.

The strong economic recovery of 2021 continued its momentum into the first half of 2022. This period of overheating has led to a dramatic surge in inflation, further exacerbated by the outbreak of war between Russia and Ukraine. Consumer prices and production costs have soared. To calm the situation, the States of the major Western economies have tightened their monetary policies. At the end of the year, the economy showed clear signs of slowing down, these signs were even more pronounced in the fourth quarter. The demand for transport is slowing down, leading to a drop in freight rates, particularly in containerised maritime transport.

Beyond the immediate adjustments, the year 2022 saw new movements in the tectonic plates of globalisation.

1/ Growth is running out of steam 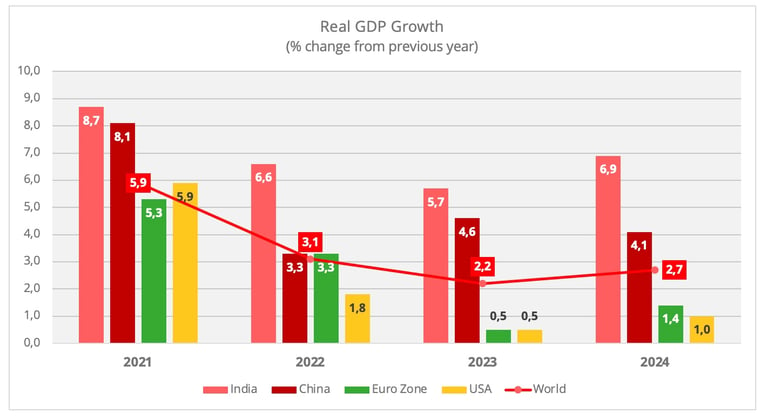 2021 was marked by a strong economic recovery, indicating a catch-up effect after the period of quasi-paralysis of the economy that occurred in 2020, when the outbreak of the Covid-19 pandemic began.

In 2022, a slowdown was indeed expected by economists, but its magnitude came as a surprise. "Global gross domestic product (GDP) growth is projected to be 3.1% in 2022, half the rate seen in 2021 during the post-pandemic rebound, and to slow further to 2.2% in 2023, well below the pre-war rate", the OECD points out in its updated economic outlook of November 2022. Indeed, last year at the same time, the OECD mentioned a growth assumption of 4.5% for 2022.

Last year, all major global economies were affected by the slowdown in growth, following the rebound in 2021. In 2023, the United States and the Eurozone will both experience the same downward trend. Indeed, it is in these two zones that the lowest rate of GDP growth is expected among the world's major economies. India will also see a decline, despite being identified as having of one of the best expected growth rates in 2023. China, finally, should benefit from the easing of the Zero Covid policy. However, some economists expect a difficult start to the year, as a resurgence of Covid cases is expected in the first months due to more relaxed lockdown measures. 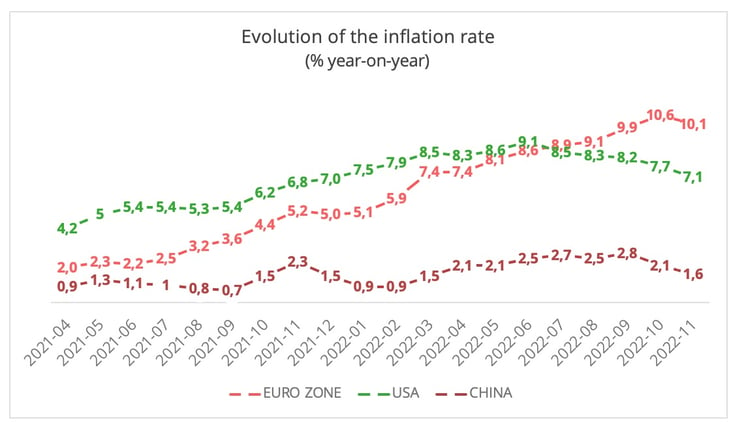 While economists were surprised by the magnitude of the economic slowdown, they were even more surprised by the surge in inflation. At the end of 2021, the OECD had projected a 4.5% increase in consumer prices for 2022. As for the European Central Bank, it estimated that the spike in inflation would reach its peak at the end of 2021 or during the first half of 2022, before a decline during the second part of the year. Nothing happened as expected.

“In the median advanced and emerging-market economy, headline consumer price inflation reached 9.6 % and 10.8 % respectively in the third quarter of 2022. The unexpected persistence of inflationary pressures this year owes much to the outbreak of the war in Ukraine, which resulted in an immediate spike in a number of key commodity prices – for oil, gas and coal, a range of metals, wheat and corn and some edible oils, as well as fertilisers. While that spike has subsequently been unwound for most commodities, in part due to weak demand from China, the prices of internationally traded gas and coal remain elevated," says the OECD.

Note : The term 'TTF Gas' corresponds to the price of this hydrocarbon on the Dutch market for TTF natural gas (Title Transfer Facility), while the price of coal is that communicated by the Hamburg Institute of International Economics (HWWI, Hamburgische WeltWirtschaftsInstitut). November figures are the average of the data available up to 16 November.

Inflation declined in the United States at the beginning of the summer. However, the situation remains critical in the Eurozone, where it was not until November that an inflection was noted. "Amid exceptional uncertainty, Eurosystem staff have significantly revised up their inflation projections. They now see average inflation reaching 8.4% in 2022 before decreasing to 6.3% in 2023, with inflation expected to decline markedly over the course of the year", says the European Central Bank.

Consumer price inflation is linked to the increasingly widespread impact of rising production costs, in particular energy costs. This increase is such that it could not be fully absorbed by the companies. The evolution of labour costs is another potential reason why "above-target inflation is becoming entrenched", points out the OECD, stating that “labour markets generally remain tight".

A phenomenon that had contributed to fuelling inflation in 2021 and early 2022, on the other hand, faded at the end of the year: the supply chain congestion. Today, there is a downturn in consumption and stocks are full. The logical consequence is a collapse in transport demand. This situation causes the prices of containerised maritime transport to the main corridors of Asia-Europe and Transpacific to plunge. "The impact of shipping costs on inflation is estimated to have peaked in the third quarter of 2021, and declined to just 0.18 percentage points by the third quarter of 2022, and zero as of mid-November 2022," says the OECD.

The situation is a little different in road transport. In 2022, European road transport prices rose sharply, but this is mainly linked to the pass-through of soaring fuel prices. At the end of the year, the sector also suffered from the slowdown in demand. However, labour shortages are contributing to the ongoing supply tension. 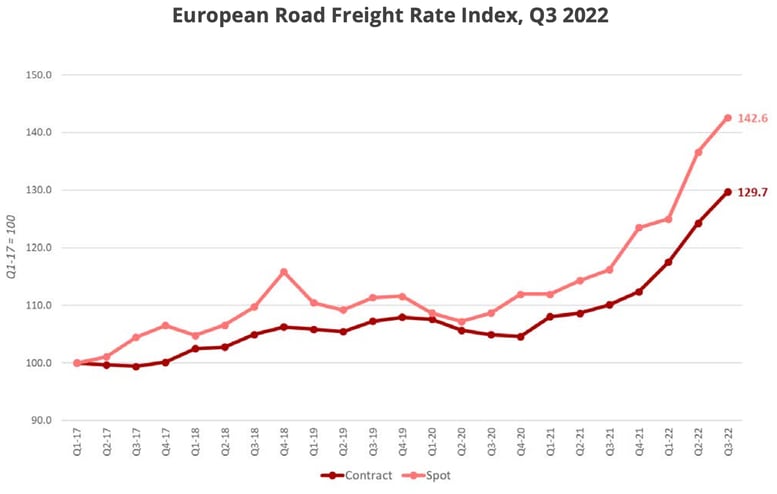 World trade in goods started 2022 on a very dynamic note, in line with the year 2021. "Global trade continued to recover in the first half of 2022, helped by strong demand and some easing in supply chain bottlenecks and port congestion, alongside the lifting of most COVID-19 restrictions in many countries," details the OECD.

However, not everything is “back to normal”. First of all, the dynamism of the first half of the year masks "a sharp contraction in China’s imports in the first half of 2022 as its zero-COVID-19 policy remained in place". It will be interesting to see whether the easing decided at the end of 2022 will perk up imports.

Indeed, during the first 10 months of the year, there was a very slight increase in the value of China's imports from the European Union (+2.9%) and from the United States. On the other hand, the “export machine” is still up and running. However, there is a large gap between the increase in exports from China to the United States (+13.6%) and those to the European Union (+40.4%). This can be seen as a first expression of the desire shown by the United States to break away, which is expected to grow further. Europe, on the other hand, is currently struggling to put its desire for sovereignty into practice. But the pandemic, followed by the war in Ukraine, uncovered major vulnerabilities. The movement is not yet very noticeable, but 2022 marked the first shifts of the tectonic plates of globalisation.

After optimistically believing in a temporary trend, the major economies had to face up to the fact that inflation had taken hold and even reached levels not seen for several decades. To stem the phenomenon, they have tightened their monetary policies. “The Fed, ECB, and Bank of England (BOE) have recently been raising rates in outsized moves. Our latest forecasts for the peak in Fed rates - at 5% - and ECB - at 3% - have been revised up by 100bp since September. Our latest 4.75% peak forecast for the BOE has been revised up by 150bp since the previous GEO. We do not anticipate a pivot to rate cuts until 2024," says the credit rating agency Fitch.

A point of concern for global players in the supply chain, a significant part of whose costs is expressed in dollars, is the appreciation of the US currency. “Larger increases in market interest rates in the United States relative to many other economies have pushed the US dollar to its highest level in the last two decades, contributing to greater volatility in the currency markets of advanced and emerging-market economies,” the OECD said.

What is 2023 shaping up to look like, in the light of the major trends observed in 2022? “From an economic perspective, 2022 will go down in history as the year in which elevated inflation made a surprising comeback forcing major central banks to start an aggressive tightening cycle. It is highly likely that in twelve months’ time we will look back at 2023 as a recession year, a year of disinflation, and a year in which official interest rates reached their terminal rate and stayed there" writes William De Vijlder, Group Chief Economist for BNP Paribas, in an analysis note published mid-December.

The contraction in demand will obviously have an impact on the volumes of goods to be transported, which could lead to pressure on prices, even though costs will remain high. The transport sector is particularly vulnerable to volatility of energy costs. It is also at the front line in facing labour shortages, particularly in road transport where the shortage of drivers is becoming critical.

Finally, even if the crisis has somewhat overshadowed environmental concerns, with, for example, the reactivating of coal-fired power stations to ensure energy supplies, the subject will obviously come back to the fore. For the world of transport, the path of energy transition is synonymous with costly investments, in addition to the fact that alternative technological solutions are still unclear. To cross this threshold in the context of a gloomy economy, the sector will undoubtedly need massive aid, commensurate with its "essential" and even "strategic" role that was finally identified during the crises of the last three years.