Europe wants to increase its role in transport connectivity

Two new EU policy initiatives will influence transport connectivity strategy. We offer an analysis of these texts, with a focus on the Europe-Asia connection.

On September 15th, the EU Commission presented its Indo-Pacific strategy as well as a new infrastructure investment scheme called “Global Gateway”. Transport connectivity, as the backbone of international trade, is a critical component in both of these policy initiatives. This article discusses the potential development, with a focus on the Europe-Asia connection.

EU trade with the Indo-Pacific region

Europe has extensive trade connections with the Indo-pacific region (Figure 1). Prior to the EU's Strategy, three of its member states, France, Germany, and the Netherlands, had already published their own Indo-Pacific Strategies. In 2020, the EU's main trading partners in this area accounted for 12% of the EU’s global exports and 15% of the EU's imports from non-EU countries [1]. Together with China, it accounts for more than one-third of the EU's total trade. Machinery products [2] and transport equipment are the top two trade commodities in both imports and exports. 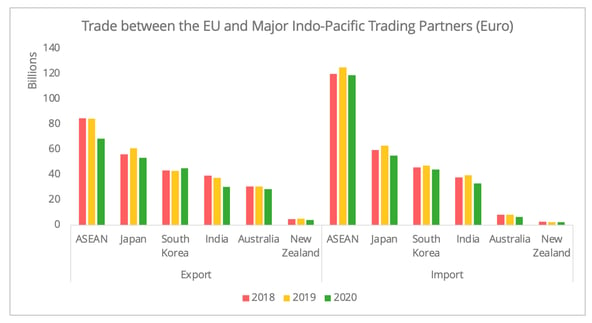 The global pandemic has generated higher European demand for products from Indo-Pacific countries. Around 15.5% of the EU's total imports in the first semester of 2021 came from its major Indo-Pacific trading partners, slightly up from 14.8% for the same period in 2019 (Figure 2). 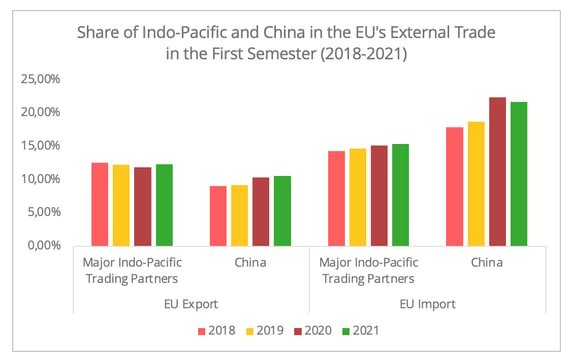 The trade connection between these two regions will continue to thrive. On the one hand, developing links is a priority of the EU's Indo-Pacific strategy (Figure 3). On the other hand, the EU is the largest foreign investor in India and ASEAN, two promising supply chain diversification options. 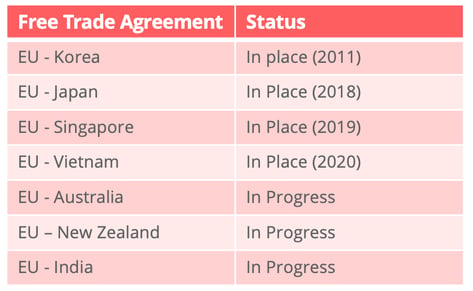 EU’s engagement in financing connectivity infrastructure in this region

The substantial economic interests of the EU in the Indo-Pacific region stimulate connectivity projects. In 2018, the EU published its Asia-Europe connectivity strategy. Since 2017, the European Investment Bank (EIB) has sharply increased its financing of transport infrastructure in Asia. Out of the 3.5 billion Euros that the EIB has loaned to Asia since 1995 in the sector, 2.4 billion was granted in the past four years (Figure 4). 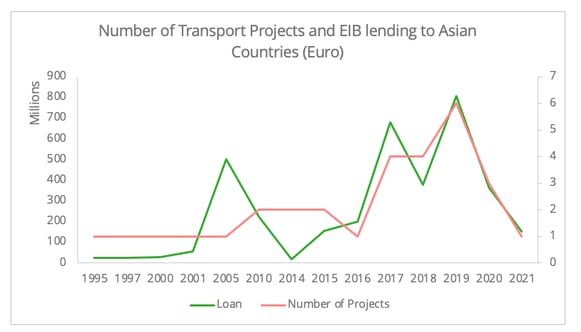 Specifically, India (71%), ASEAN (10%), and China (10%) are the top three recipients (Figure 5). The transport sector accounted for almost half (47.8%) of the total EIB loans to India from 1995-2021. It should be noted that most of the financed projects are not freight projects, but rather green urban transport infrastructure, such as rail and metro lines. Although these projects may not be directly associated with transport and logistics activities, they help to improve the overall business operating environment in these regions. 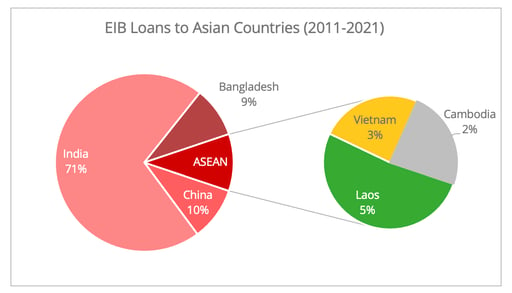 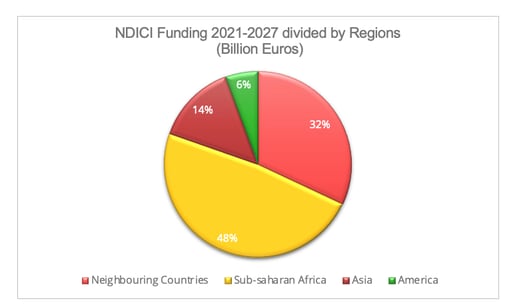 This policy is set to continue. According to the EU’s 2021 to 2027 long term budget of 60.38 billion Euro for the Neighborhood, Development, and International Cooperation Instrument funding (NDICI) scheme, around 8.48 billion Euros will flow to Asia countries (Figure 6). Connectivity is one of the critical sectors. What kind of infrastructure projects and shipping opportunities can be expected? Here we will try to sketch out ways forward, based on the EU's connectivity partnerships or joint statements with its counterparts.

While fields and projects in transport connectivity vary across the EU's counterparts, digitalization and sustainability are a common thread (Figure 7), in line with the EU's Intelligent and Sustainable Mobility Strategy.

Europe places particular emphasis on the quality of the regulatory environment, as illustrated by the desire to harmonise standards in the field of rail transport (India) and air transport (India, ASEAN). Accordingly, investment in digital transport infrastructure to support this aim is envisaged.

Besides financing transport projects in the Indo-Pacific region itself, the EU is keen to conduct joint transport connectivity projects with Indo-Pacific counterparts in third markets (Figure 8). Improved regional transport connectivity is one of the primary goals of third market cooperation. It is essential to consolidate value chains, especially considering the fact that increased regional diversification of supply chains may develop in the context of the pandemic.

Some strategic third markets for transport connectivity projects include Africa, Indo-Pacific, Central Asia, and Eastern Europe [3]. The preferred third markets vary depending on the EU’s cooperating counterparts. For instance, for the EU-India tandem, one of the priorities in cooperation is the Bay of Bengal Initiative for Multi-Sectoral Technical and Economic Cooperation (BIMSTEC). In addition, the EU wishes to develop third-market cooperation projects in neighboring countries where it has strategic interests, as well as in Africa.

In the case of Africa, the EU and Japan have already jointly financed multiple transport corridors in West Africa. The EU plans to concretize its infrastructure investment in Africa under the “Global Gateway” strategy at the next EU-Africa Summit in February. Projects to improve hydrogen infrastructure are of major strategic interest, "in order to create a green hydrogen market linking the two shores of the Mediterranean", says the EU.

Another strategic third market would be the EU's neighboring countries. Infrastructures in these countries enable links with the Trans-European Transport Network to optimize the Europe-Asia connectivity. Ukraine is likely to be one of the third markets where joint transport projects between Japan and the EU will occur.

The global gateway infrastructure investment scheme and the EU’s Indo-Pacific strategy emphasize the EU’s aim of seeking an alternative approach to the Chinese Belt and Road Initiative. However, one should not simply label the recent EU policy moves as competition with China. Instead, it is an attempt of diffusing a standard in developing infrastructure projects, the European way. This in return could possibly help the EU to obtain a level-playing field in competing with other countries in connectivity projects. As ambitious as the policy initiative looks, it remains unclear how the EU will implement them. Several challenges will have to be met.

[3] In the connectivity partnership between the EU and Japan, Eastern Europe and Western Balkans are also included.

[4] EU-India and EU-Japan are connectivity partnerships. EU-Australia is a joint statement on connectivity.