BAROMETER. Road transport prices in France started to fall again in December 2022 according to the Upply Freight Index, following the drop in the price of diesel but also, and especially, that of volumes.

For now, the French economy has been particularly protected: public spending, through various aid mechanisms, has supported investment and growth. But these grants of limited duration are expected to end, probably by the end of 2022 or the beginning of 2023. December 2022 could well signal the end of the era of massive shields for the French economy, even if the government is already being forced to give some slack to certain professions that are very exposed to the increase in energy prices, such as bakers, at the risk of arousing jealousy in other sectors.

Inflation has decreased a little, but it continues to fuel the social protest which has reappeared at the SNCF and also in hospitals. The post-holiday period in January, promises to be perilous with the arrival of the pension reform.

Chronicle of an announced decrease in transport prices

It is in this context that French month-on-month road freight transport prices fell by 2.4% in December. They resume the downward trajectory that we have observed since the end of the summer, after a misleading hiatus in November. 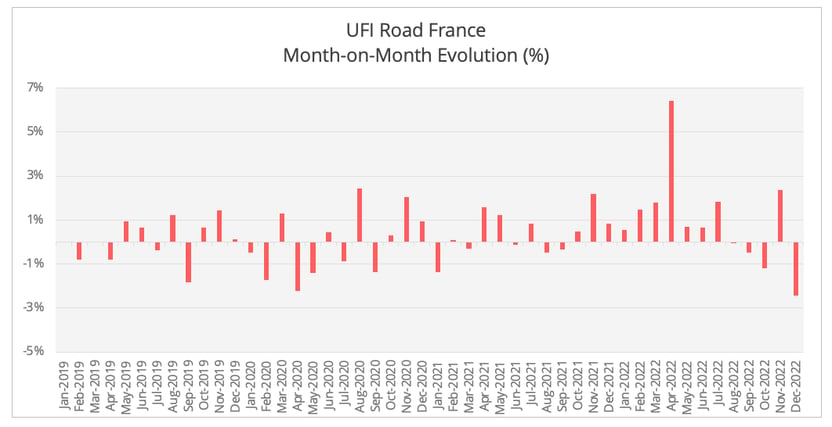 Very strong contraction of the transport market in December

However, the fall in prices observed in December is atypical. In general, transport prices tend to approach or reach their annual high during the pre-Christmas peak season. Certainly, as we have explained, the evolution of the price of diesel has played a role in this atypical development. But it is now very clear that another major reason is coming into play (...)