The ten countries of ASEAN and five Asia-Pacific countries signed a major trade deal on November 15, giving birth to the world’s largest trading block. In this paper, we analyze the main points of the RCEP, with an emphasis on the impact on Europe-Asia trade.

2020 could not have been more eventful. The pandemic, the US presidential election, the EU-UK negotiations: all of this will set the tone for international economy and politics for years. However, we must not forget an equally important event: the signature of the very first intra-Asia trade agreement, named the RCEP (Regional Comprehensive Economic Partnership).

This agreement was signed on November 15, 2020, after an eight-year negotiation, between 15 Asian-Pacific countries. The signatory partners are China, Japan, South Korea, Australia, New Zealand, and the ten ASEAN countries, Vietnam, Laos, Myanmar, Thailand, Malaysia, Indonesia, Brunei, Cambodia, Singapore, and the Philippines. With a total GDP of 26 trillion USD, this trade agreement forms the world's largest trading block, accounting for 30% of the world's total GDP and 28% of global trade. The RCEP aims to gradually reduce tariffs among the 15 member states over 20 years.

Overview of the RCEP

The RCEP is less "comprehensive" than the CPTPP (Comprehensive and Progressive Agreement for Trans-Pacific Partnership) or the EU's Free Trade Agreements. It barely touches upon issues such as sustainability [1] or labor rights, clearly privileging a focus on trade as the two following key elements show.

The RCEP forms the very first trilateral free trade agreement between China, South Korea, and Japan. Each of these three countries has an FTA with ASEAN, but the trilateral FTA negotiation has long been at a standstill. Under the RCEP, South Korea and Japan will gradually eliminate 83% of the tariffs on each other's products. China will also remove 86% of the tariffs on Japanese goods entering its market.

The tariff reduction in the automotive sector deserves specific attention. Multiple types of automotive intermediate parts will be subjected to a gradual elimination of tariffs. About 87% of Japan's auto parts exports to China will enjoy a lowered tariff once the agreement enters into force. Yet, most Japanese and Korean trucks and passenger cars entering the Chinese market will still be imposed with a 20-25% tariff. Similarly, Chinese and Japanese trucks and passenger cars entering the Korean market will be subjected to tariffs between 8% and 10%.

Another breakthrough is the harmonization of the Rule of Origin among the signatories. Under this agreement, products with 40% or more of their components that are sourced from the RCEP countries will be treated equally among the 15 countries by using one unified form. According to Allianz's estimation, upon the agreement's implementation, removing this non-tariff barrier can boost intra-Asian merchandized exports by an average of 90 billion USD annually.

The EU has a growing trade connection with the RCEP signatories. China, Japan, and South Korea are not the only ones among the EU's top ten trading partners. In addition, the EU has signed free trade agreements with four signatories and is negotiating with five others (Figure 1). The EU-China Comprehensive Agreement on Investment was concluded on December 30, 2020. 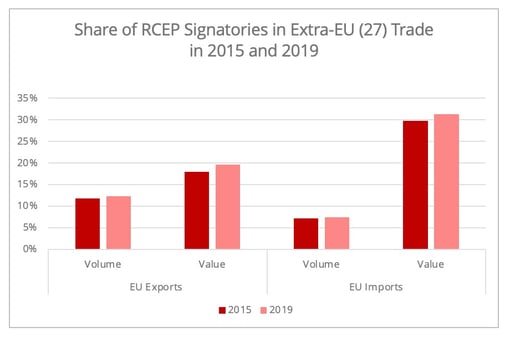 In both imports and exports, machinery products and automotive goods are among the top five merchandise categories. In 2019, these two categories accounted for 44% of total value and 7% of total volumes for the EU's exports to the RCEP countries, and 53% of its import value and 18% of the volumes. 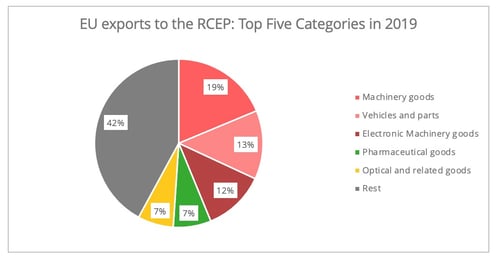 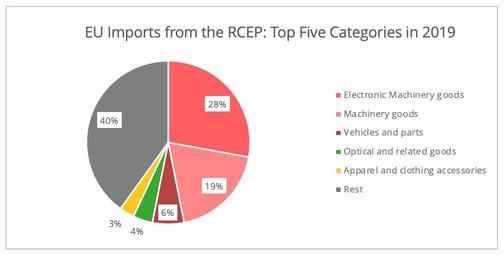 Impact on the EU-Asia Supply Chain

On the one hand, the European companies with established intra-Asian supply chains or Asian subsidiaries can benefit from a reduction in costs under the harmonized Rule of Origin and reduced tariffs among the RCEP countries. This is particularly the case for European industries with a well-established supply chain in Asia, such as the automotive, electronic machinery, and textile sectors. For instance, in 2019, 69% of Adidas' suppliers were located in the Asia-Pacific region. However, according to forecasts made by the Peterson Institute of International Economy, the EU will globally register a modest 0.1% gain from the RCEP by 2030.

On the other hand, EU manufactured goods could have an increased risk of losing competitiveness in sectors with well-established intra-Asian supply chains in the RCEP market.

Let us take the automotive industry in China as an example. Even though the EU remains China's largest exporter in this sector, the share of RCEP suppliers has been increasing over the years, especially from those in Southeast Asian countries, due to offshoring. For instance, though the share remains marginal, exports of passenger cars to China from Thailand, Southeast Asia’s automotive manufacturing hub, have drastically increased in value terms over the last 5 years by more than 5,000 times. This is mainly due to the relocation of Japanese automotive manufacturing to Thailand, including eco-energy autos. The cost of automotive manufacturing via an intra-Asian supply chain will be reduced along with the gradual elimination of tariffs on auto parts entering ASEAN countries and the removal of non-tariff barriers.

The search for competitiveness in the Asian market could motivate European firms to diversify their supply chain within the RCEP countries instead of reshoring or relocating to other non-RCEP countries, like India, who dropped out of the agreement in 2019. The pandemic served as a wake-up call for many companies to enhance the supply chain resilience, either by diversifying its manufacturing sites or near/reshoring. Not to mention that Asia is also a fast-growing market. As such, the RCEP seems to add more rationales to adopt the first option.

Impact on the Europe-Asian connectivity

Specifically, on the Asia-Europe trade lane, the impact of the RCEP on the supply chain could add to the already asymmetrical shipping flows eastbound and westbound. Those sectors most likely to be affected are also the ones that comprise a significant portion of the eastbound shipping.

For instance, for the textile industry, research in 2018 estimated that the implementation of the RCEP could lower the EU and the US's share in signatory countries from 9.5% (in 2015) to 6.5% [2]. However, the director of the European Textile and Apparel Confederation, in an interview to Vogue Business, also presented a positive outlook that the integrated Asian market could potentially increase the demand for EU high-end luxury and high-tech textile materials, which could potentially compensate for the losses due to the RCEP.

Nonetheless, this is not the full picture.

The changes in trade flows may affect shipping modes as well. The RCEP could generate growth in intermodal shipping activity between Southeast Asia and Europe, particularly road-railway via China. Due to ASEAN manufacturers' low-inventory and high-turnover strategy and less established railway logistics infrastructure in Southeast Asia, the tight trade connection between ASEAN and China can generate increasing demand for ASEAN-China road freight. Currently, the road-railway shipping connection between Vietnam and Europe, via southwestern China has been established, for goods such as raw materials from Europe for further manufacturing purpose.

[1] The terms in this agreement touching upon the sustainability issue are to abide by the Convention on Biological Diversity.

[2] The research was conducted with EU-28 and with India being included.