Mixed signals as air freight moves into the peak season

BAROMETER. Global air freight traffic suffered a fresh 8.3% year-on-year reduction in August 2022 and, despite some positive signals, the peak season promises to be very lacklustre.

The period of overheating experienced by the global air freight industry has well and truly come to end, just as it has in container shipping. Latest figures from the International Air Transport Association (IATA) show that demand fell by 8.3% in August by comparison with the same month last year. This fall is a little more modest than the 9.7% reduction recorded in July. On the basis of seasonally corrected data, moreover, cargo volumes even rose 1% on year on year, thanks to a slight recovery in world trade and an easing of the restrictions introduced by China under its Zero Covid strategy. These indicators are not enough, however, to allow prospects for the coming months to be viewed with any serenity. 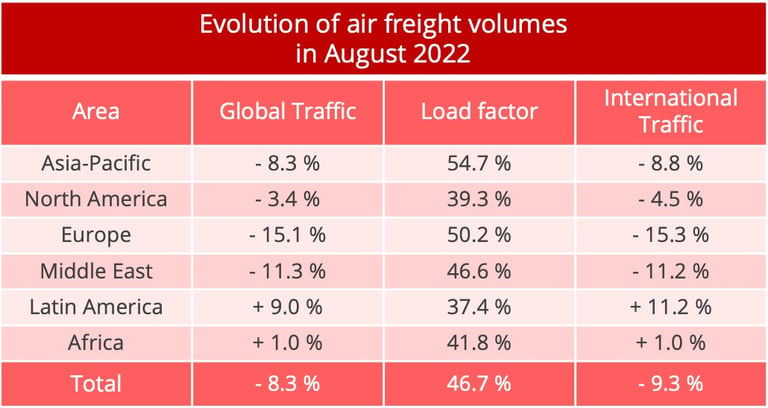 Reductions on all main markets

Only the African and Latin American airlines recorded an increase in traffic over last year but, with market shares of 2.2% and 1.9% respectively, they do not weigh heavily in the balance.

European and Middle Eastern airlines were hardest hit by the headwinds currently blowing in the air freight sector. They are operating in the areas most exposed to the disruption caused by the conflict in Ukraine.

The situation has improved for the Asian airlines, thanks to the easing of Covid-19 restrictions in China. This also enabled the American airlines to experience a slightly smaller reduction in traffic in August.

At the same time, capacity is continuing to be brought back into service to meet the dynamic recovery in passenger traffic. Capacity increased 6.3% year on year in August, an increase which was markedly higher than the 3.6% figure recorded in July. This upward trend was particularly notable among the Asian companies, which saw their capacity increase 13.9%. Here again, this should be credited to the effect of the easing of anti-Covid-19 measures in China.

In Upply's database, which takes account of spot and contract prices, there is less immediate sensitivity about the current economic situation. On most major routes, freight rates remained considerably higher than they were in 2021 year on year. Month on month, however, there has been a clear slowdown which, according to the first results available, continued into September.

There was some good news for the air transport sector in the month of August, starting with the stabilisation of oil prices and the inflation rate, the progression of both of which slowed in G7 countries for the first time since November 2020. A slight increase in world trade in goods was another positive sign in the air freight industry but it will probably be short-lived, since it is mainly due a catch-up effect following the end of the disruption to trade flows caused by lockdowns in China.

The latest forecasts from the World Trade Organisation (WTO), which were published on 5 October, were very pessimistic. "World trade is expected to lose momentum in the second half of 2022 and remain subdued in 2023 as multiple shocks weigh on the global economy," the WTO said. "WTO economists now predict global merchandise trade volumes will grow by 3.5% in 2022—slightly better than the 3.0% forecast in April. For 2023, however, they foresee a 1.0% increase—down sharply from the previous estimate of 3.4%." IATA has already pointed to a fall in new export orders on all markets, with the United States the only exception.

Moreover, air freight which reduced the gap in competitiveness between it and the shipping sector in 2021, has today lost that advantage. Asia-Europe spot rates have fallen sharply since the start of the summer.

At the same time, stocks remain at high levels in Western storage depots, limiting the need to turn to air freight for urgent deliveries. The traditional high season looks likely to be relatively sluggish this year, therefore, after two years in which it was particularly vigorous.