Air freight: the peak season gets off to a slow start

October was the 11th consecutive month in which freight volumes have fallen. The month, which generally marks the start of the peak season in air freight transport, failed to reverse the general trend which has marked 2019. "Air cargo’s peak season is off to a disappointing start, with demand down 3.5% in October," said IATA director general and chief executive Alexandre Juniac in a press release announcing the results. "Demand is set to decline in 2019 overall – the weakest annual outcome since the global financial crisis. It has been a very tough year for the air cargo industry."

At the same time, capacity has continued to increase, albeit modestly. In October, capacity increased 2.2%, taking the freight load factor to 47.7%. For the 18th consecutive month, supply grew more quickly than demand, according to IATA.

Asia/Pacific and the Middle East struggle

The situation is particularly worrying for airlines in the Asia-Pacific and Middle East regions. Freight traffic in these two zones, which are highly dependant on the state of world trade, fell 5.3% and 6% respectively in October.

Improvement in Europe and North America

North America and Europe did a little better, recording reductions of 2.4% and 1.5% respectively. In the United States, traffic was driven by domestic activity, which performed better than the international sector, which was affected by tensions with China. In Europe, IATA believes that better than expected third quarter performances by the economies of some major countries enabled demand to hold up relatively well.

Africa was the only zone to show an increase in traffic and, at 12.4%, it was a substantial one at that. Growth was boosted by Africa-Asia traffic flows, which increased 23% in September, according to the latest data available, IATA said. African airlines only have a small share of the global market (1.6%), however. The same is true for airlines in Latin America (2.7%), where traffic volumes fell 2.6% in October. 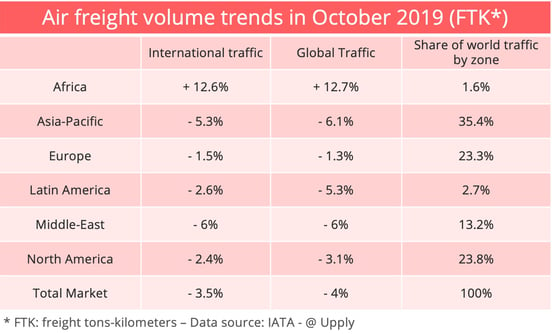