The air freight industry is continuing to enjoy a favourable environment. According to the International Air Transport Association (IATA), cargo volumes in tonne-kilometres increased by 9.4% in May 2021 by comparison with May 2019 and by 0.4% by comparison with April 2021 on a seasonally adjusted basis.

These figures show a slight erosion in the rate of growth since April figures were 11.3% up on April 2019 and a 3.2% up on the preceding month. The lights are still on green nevertheless in the air freight sector, which has now registered its 13th month of consecutive growth. 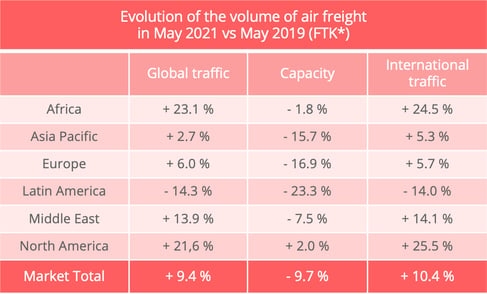 The economy is still in a recovery phase following the slump experienced at the height of the first wave of Covid in 2020. "World trade and industrial production rose by respectively 0.5% and 0.2% month-on-month in April," IATA noted. "Purchasing managers indices (PMIs) show that business confidence, manufacturing output and new export orders are growing at a rapid pace in most economies.

This recovery period, which generates a need for rapid restocking, is particularly favourable for air freight. April was the fifth consecutive month in which cargo volume growth exceeded that of world trade.

IATA points to a slight deterioration in manufacturing production indices in recent months, particularly in emerging markets, although Europe and North America continued to show growth. The export order component of the PMI showed a certain levelling off in China and South Korea after a period of marked recovery. This could be partly explained by a switch from goods to service consumption in line with the steady lifting of restrictions in the hotel, restaurant and leisure industries. For the time being, however, this slowdown is not posing a threat to the global dynamism of the air freight industry.

This dynamism is being sustained by another phenomenon - a reduction in the competitiveness differential between air transport and shipping. According to IATA, before the Covid-19 crisis, air freight was more than 12 times more expensive than sea freight per taxable kilogramme. This ratio was reduced by half in May 2021 to six.

The reduction is all the more spectacular for the fact that air freight rates, including surcharges, have also increased strongly since the start of the pandemic. Between May 2019 and May 2021, they showed an increase of more than 90%, while company revenues increased by more than 70% over the same period.

For some months now, there has been some fluctuation in freight rates on different transport corridors. Our Upply data base nevertheless shows good global growth, particularly on Asia-Europe and intra-Asian routes. East-west transatlantic routes showed a slight fall in May by comparison with April but prices were still higher than in May 2020. 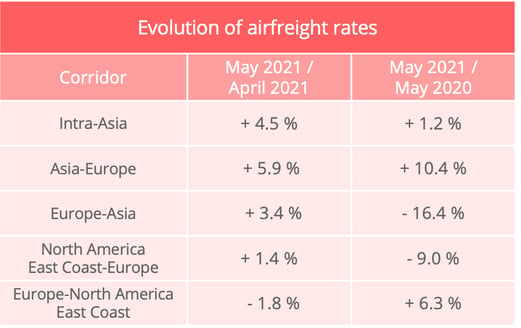 Source : Upply - NB : These estimates are based on real transactions. The Covid-19 epidemic and its impact on business activity have made data gathering more complex. The changes registered may be revised as new data is integrated.

The increase in air freight rates since the start of the crisis bears no comparison, however, with the sharp spike in ocean freight rates. Quality of service has deteriorated considerably, moreover, both in terms of transit time and access to capacity aboard ship. The exceptional congestion in the container supply chain which is causing this is also contributing, however, to an increase in the competitiveness of the air freight industry.

Like the shipping industry, air freight is also suffering from capacity problems even if the situation has considerably improved from one month to another. In May 2021, capacity was still 9,7% down on May 2019 but was nevertheless 0.8% up on April 2021, which thus became the fourth consecutive month to see capacity increase.

The capacity issue will continue to be a crucial one in the months to come. To meet demand from clients while passenger flight schedules were being heavily disrupted by the Covid pandemic, the airlines adapted their aircraft to more carry freight, even making use of passenger cabins. Cathay Pacific Cargo has announced, moreover, that it will be modifying two more aircraft in preparation for the next peak season. According to IATA, however, these operations are "complex and costly". The airlines may well decide, therefore, to carry them out less frequently as long-haul passenger traffic resumes. Capacity will have a determining effect on prices over the next few quarters and particularly during the peak season before the end-of-year festive period.

For some months already the North American airlines have been leading the race and the month of May was not an exception. Their international traffic was 25.5% higher than in May 2019, whereas capacity rose just 1.6%. At global level, the North American companies contributed 4.6 points percentage to the 9.4% increase in traffic worldwide.

Carriers in the Asia-Pacific zone, on the other hand, are experiencing a much slower recovery, with traffic growth up 5.3% on its pre-crisis traffic level in May. They are continuing to experience major capacity constraints since available capacity was still 16.9% lower than in May 2019. Another indication of the fragility of the recovery is that traffic growth slowed in May by comparison with April 2021. The Asia-Pacific companies remain in pole position in terms of market share, accounting for 32.6% of the global market, but their lead is diminishing. In May 2021, the North American companies had a 27.8% of global air freight, whereas, in May 2020, they were 10 percentage points behind the Asia-Pacific companies.

In third place, with a 22.3% market share, the European companies have also been experiencing a moderate recovery, with cargo volumes up 5.7% over May 2019. Again, this represents a marked slowdown in relation to April, when the increase over the pre-crisis level was 11.5%. IATA explains this by a fall in traffic on certain key routes like Asia-Europe and intra-Europe routes.

Middle Eastern airlines, on the other hand, continued to show two-figure growth, with international volumes up 14.1% over May 2019. Another favourable factor was that available capacity on offer was only 6.1% down on what it as before the crisis.

The two smallest markets had radically different experiences. As has already been the case for several months, the African companies reported vigorous growth despite lower growth in Asia-Africa cargo volumes. Their traffic rose 24.5% in May, while available capacity edged up 0.5% by comparison with May 2019.

Latin American carriers were the only ones to handle less international freight than before the crisis (-14%). There was a gleam of hope, however, since the 14% drop in traffic was markedly lower than the 32.3% reduction recorded in the previous month. It is still too soon, however, to know if the Latin American companies will succeed in recovering the share of the Latin American market share taken from them during the pandemic by the North American and European companies. Several carriers are currently undergoing restructuring operations, moreover.