Air freight still not back to 2019 level

Demand for air freight has been rising constantly since the low point in the month of April but at a slow rate. Freight rates are tending to stabilise as the peak season approaches.

The month of August confirmed the disappointing diagnosis made by the International Air Transport Association (IATA) in July. Worldwide demand for air freight is recovering less quickly than the economy. Traffic in ton-kilometers was down 12.9% compared with August 2019. On a seasonally corrected basis, the data certainly shows that traffic has increased for four consecutive months, with August 1.1% up on July. "The pace of the improvement has however regularly slowed over time," IATA said, "from an 8.8% month-on-month increase in May".

The economic indicators, whether for manufacturing output or export orders, are showing growth but the air freight industry is not managing to take full advantage of this.

According to IATA, lack of capacity remains a major brake on growth. In August, available cargo space on passenger aircraft was still 67% less than in August 2019. To compensate this shortfall and respond to demand, cargo aircraft are being used to the full. Wide-bodied aircraft are flying nearly 11 hours per day on average, which is the highest daily average since IATA began collecting this date in 2012. The capacity available aboard freighters, moreover, is 28.1% higher than it was in August 2019.

The shortage of capacity is continuing to affect freight rates. Even if the stabilisation trend seen in July has been confirmed, prices are still at high levels compared with 2019.

In August, the slowdown affected virtually all routes but, according to first estimates using our Upply data base, comparisons between the last week of September and the last week of August show increases on Asia-Europe and Europe-East Coast North America routes. 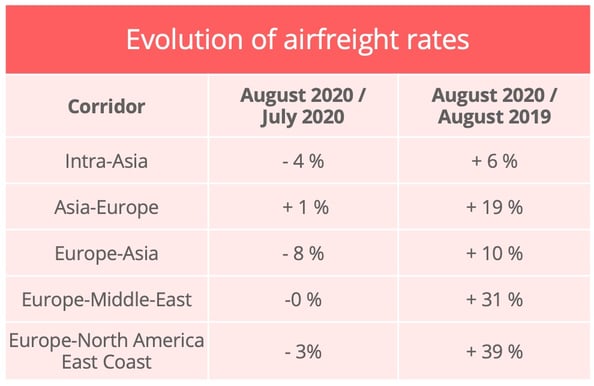 We are currently approaching the traditional fourth quarter peak season for the air freight business. In the technology sector, the run-up to Christmas is often a favorable period for the launch of new products. This year is no exception. The launches of the iPhone 5G and Playstation 5 are currently due, although they are running late on the timetables originally planned by their manufacturers. IATA believes that this could affect demand in the final part of the year, particularly on routes Asia and Europe. Another possibility which could favor the air freight business but which is much less certain would be the discovery of a vaccine against Covid-19.

One thing is certain. The capacity shortage is going to continue to be a crucial factor over the next few weeks. It is the case, notably, on those markets which have traditionally relied heavily on the use of passenger aircraft holds, like the Europe-North American market. In According to IATA, "total capacity on the large Europe-North America market was down 56% yoy (year on year) in total in August, with dedicated freighters up 8.8% only". 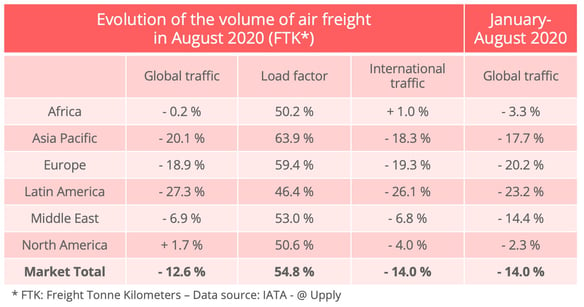 It should be said that, for North American airlines, the priority is elsewhere. They are resisting the crisis well since the fall in their international traffic was only 4% in August when traffic overall rose 1.7% (see table). Theirs was the best regional performance in August, which was the "third consecutive month with a single-digit decline", according to IATA. The presence of large integrators with big cargo fleets certainly played a role in this performance. But it is also due in part to strong internal and Transpacific demand on routes between Asia and North America, "reflecting e-commerce demand for products manufactured in Asia", IATA said. Against this background, it is understandable that the transatlantic sector is not a priority.

Asian and European carriers, on the other hand, have not succeeded in returning to growth, given that demand is still around 20% below what it was in August 2019. For the Asian airlines, some markets, like Africa and North America, are showing growth but the intra-Asian and south west Pacific markets are showing little life. The Asian companies have been particularly penalized, moreover, by the shortage of capacity. For the European companies, demand has been increasing regularly but slowly and remains relatively weak on all commercial routes.

The Middle Eastern airlines have made some adjustments which are bearing fruit. The fall in demand in August was down to 6.9%, compared to 15.1% in July. They have succeeded in bringing in additional capacity and are benefiting from sustained demand on commercial routes to and from Asia and North America.

On the smaller African and Latin American markets, the situation is very varied. African carriers showed the best performance in the international sector with growth of 1%, helped by healthy trade levels between Asia and Africa. For the Latin American carriers, on the other hand, the slump is continuing despite a slight recovery in cargo flows towards North American, notably to and from Central America.