The rise in air freight volumes slowed down in November. The slowdown was caused by airport congestion and a lack of transport capacity on certain routes, however, rather than by a fall in demand.

Global air freight traffic in tonne-kilometres rose by 3.7% year-on-year in November 2021, according to the statistics released in mid-January by the International Air Transport Association (IATA). This performance was well below that of October, when traffic grew by 8.2% year-on-year. Seasonally corrected data showed that traffic even dropped 1.3% from month to month. 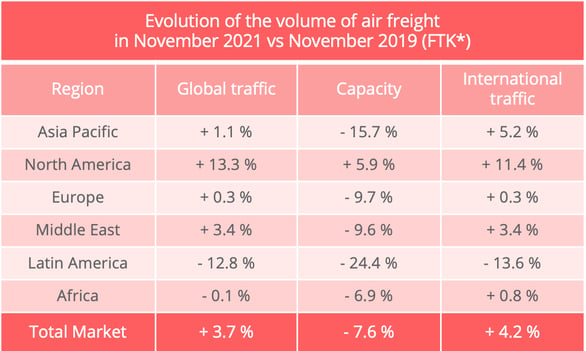 The result was all the more disappointing for the fact that November generally corresponds to the air freight industry's peak season. Whereas shipping supply lines had been heavily disrupted by congestion problems, the air freight sector could have been expected to hold its own, thanks to emergency deliveries before the Christmas period.

All the economic indicators were showing green on the demand front :

Several factors nevertheless prevented the air freight industry from fully matching demand. In the first place, the sector has still not returned to the capacity levels it had before the pandemic. In November, capacity was 7.6% down on its level in November 2019 and 7.9% down in the international sector alone. Capacity available on passenger aircraft was down 26.7% by comparison with November 2019 after having been 32.4% down in October, but the increase in cargo aircraft capacity slowed to 17.1%. Among the major regions, only North America bucked the trend, showing a year-on-year capacity increase of 5.9% in November. Conversely, the sharp 15.7% capacity reduction seen in the Asia-Pacific region, was particularly worrying, given that it is the biggest market in the world.

In addition to the shortage of capacity, which was particularly marked on certain markets, there were congestion problems at certain airports, according to IATA, which cited New York JFK, Los Angeles and Amsterdam as examples. This situation is understood to have been due to a shortage of labour, partly due to employees quarantining because of the pandemic. China has been following a particularly strict policy in this respect. IATA said that there had also been a shortage of space for the additional influx of goods generated by the peak season when disruption caused by the pandemic had already made it impossible to maintain optimal fluidity in the preceding weeks. Delays thus accumulated, even though their scale was not comparable that experienced in American sea ports.

In the words of Willie Walsh, IATA director general, "Air cargo growth was halved in November compared to October because of supply chain disruptions. All economic indicators pointed towards continued strong demand, but the pressures of labor shortages and constraints across the logistics system unexpectedly resulted in lost growth opportunities."

No let-up in freight rate rise

The fall in cargo volumes, combined with capacity levels which were almost stable in November, should have resulted in a reduction in freight rates. On the contrary, however, they continued to increase at a sustained rate, as is shown by figures from the Upply data base, which includes both spot and regular contract prices. 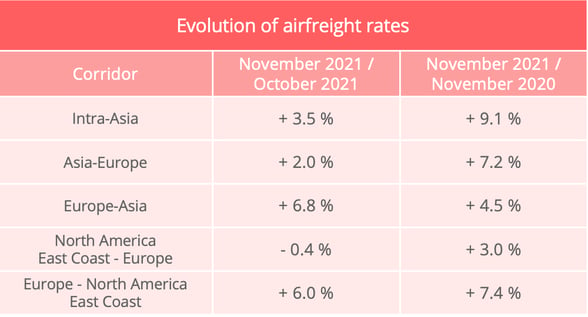 Source: Upply - NB : These estimates are based on real transactions and, therefore, represent a mixture of spot and standard rates. The changes shown may, therefore, be revised over time as new data is included in the data base.

According to IATA, this trend shows that capacity is not always where it is needed, creating tensions on certain routes and price increases. On a seasonally corrected basis, November freight rates are about 12% above the peak reached in May 2020, IATA said.