Ocean freight rates on east-west transatlantic routes are relatively stable and even showing a slightly downward trend. This makes them an exception on a shipping market which is currently marked by rate overheating in all departments.

We could almost doubt the fact, given the highs reached by freight rates on certain corridors, but the law of supply and demand is still operating in the high-volume east-west container trades…at least in the transatlantic sector. Upply's data for the Antwerp-Norfolk route provides an illustration of the fact. For the carriage of a 40' dry, high cube, non-dangerous container from port to port, with THC included, prices are stable and even slightly down. Shippers know how to intelligently take advantage of the soft demand which is characterising the market for the shipment of goods to the east coast of the United States in this end-of-year period. 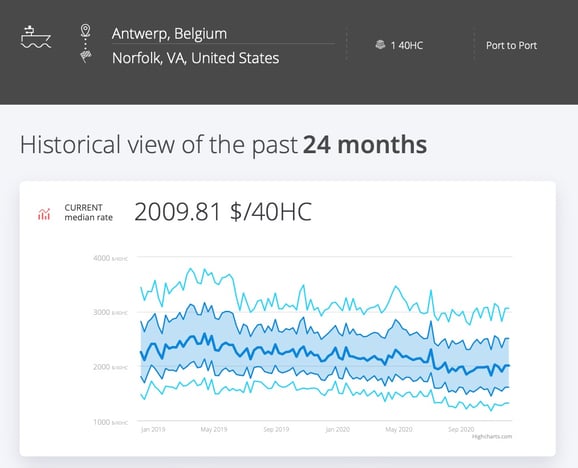 There has been no major change in capacity on offer. A few blank sailings and a reduction in capacity on offer out of western Mediterranean ports have led to some traffic being moved up to the ports of northern Europe for loading. That could have been enough to hold freight rates steady but uncertainty over the American election results also led to a number of contracts being delayed. This left space on board, therefore, which led to some discounts being offered on end-of- year rates.

It will now be necessary to keep a close eye on the measures taken by the new Biden administration in early January, particularly with regard to any reduction on duties on European products imported to the United States. A change in policy in this area could boost demand rapidly even though the three major alliances have not planned for any big change in capacity on this corridor in 2021.

The particular position of the United Kingdom, as the infernal countdown to Brexit continues, could also lead to last-minute changes to a certain number of regular line services. This is not certain, however, and, even if it happens, the changes will not be so substantial as to upset the overall dynamics of the market in this trade.