In the Transatlantic sector, the shipping companies have traditionally deployed small capacity vessels, generally ranging from 6,000 TEU to 8,000 TEU, which enables them to manage the space available. In recent months, however, we have seen a small reduction in port-to-port freight rates for a 40’ HC DRY container, THCL and THCD included.

What has happened? The first half of 2020 surprised most analysts of Transatlantic westbound traffic. Most predicted a catastrophe because of the additional customs duties on European exports decided by the United States. But, until June, US demand for European products remained sustained, as is demonstrated by Upply’s data (see the graph). 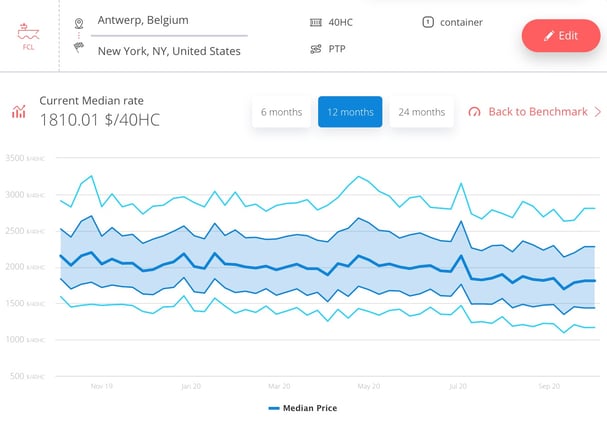 Wine and spirit exports held up very well and even grew despite the increase in duties. At the same time, the coronavirus epidemic has favoured an increase in volumes of pharmaceutical products.

Change of direction in the summer

June marked a turning point and, since then, the market has marked time despite the introduction of additional capacity restrictions by the shipping companies from time to time.

A fall in demand for wines and spirits finally made itself felt in the United States, almost more as a result of the virus than the additional customs duties. Since the start of the summer, the leading specialist forwarders have seen a switch of US imports from Europe towards Asia, mainly China. The real and expected slowdown in the automobile and aeronautical sectors are also contributing to weaker demand and, by the same token, lower freight rates.

Transatlantic freight rates should continue to follow a slight downward trend for a short time before returning to growth but still at a moderate rate. In the event that the United Kingdom and the United States conclude a bilateral trade agreement, it will be interesting to see how the Federal Maritime Commission responds specifically to the British market as opposed to that of the European Union.