A comparative view of China-Germany and China-France cooperation

Although they have not formally joined the Belt and Road Initiative (BRI), Germany and France, the two largest economies in Europe, are inevitably involved in projects undertaken within this framework. This article delivers a comparative view of the China-Germany and China-France cooperative approaches under the BRI initiative, with a focus on the transport sector.

In 2018, Germany and France were China's first and fourth-largest trading partners in the EU. Let’s have a look at the similarities and differences between Sino-German and Sino-French cooperation under the BRI framework with a focus on the transport sector.

In terms of structure and approach, they are quite similar. Both have limited state-level engagement, that gives priority to project-based & local-level participation, through the collaboration between Chinese firms (mostly state-owned enterprises), and those from Germany and France.

Unlike Italy, Germany and France have not formally joined the BRI. Instead, they promote a united European policy towards BRI. Also, the state-level engagement is achieved through their participation in the Asian Infrastructure Investment Bank, a Chinese-initiated multilateral development bank. Germany and France are respectively the first (4.6%) and second (3.4%) largest donors among the non-regional members[1], together holding around a 7.4% voting share in the AIIB[2]. Both intend to shape the BRI through multilateral institutional settings, particularly on topics such as sustainability and human rights.

Local actors, who directly participate in projects, appear to be particularly active towards the BRI in both Germany and France, such as the cities of Duisburg and Lyon which are the European destinations for the China-Europe Railways. While there are, however, no state-level Memorandums of Understanding (MoU) for the BRI, some companies who are directly involved in projects with China, for instance Siemens, have signed MoUs for BRI cooperation with Chinese firms in 2018.

Two main areas of cooperation in the transport sector

Specifically, for the transport sector, China's cooperation with Germany and France concerns two areas: integration of the TEN-T with the BRI, and third-party market cooperation. In what follows, I shall put forward a comparative view of the China-France and China-Germany approaches in these two fields, based on 3 factors: the level of state engagement, the nature of the projects and the format of cooperation.

The integration of the TEN-T with the BRI is one of China’s primary interests when it comes to cooperation with the EU within the BRI framework. As some of the connectivity projects can overlap with third-party market cooperation, we shall only be looking at China’s involvement in France and Germany.

> A strong presence in the maritime sector in France…


In France’s case, China's involvement is concentrated on maritime freight, with a moderate presence in railway and air freight.

Maritime freight cooperation is mainly between Chinese Merchants Holding (CMHI) and CMA CGM. In 2013, CMHI acquired a 49% share of Terminal Link, the port operator subsidiary of CMA CGM. As a result, Chinese Merchants Group indirectly holds shares in 15 terminals owned by Terminal Link, 4 in France (Dunkirk, Le Havre, Montoir and Fos) and 8 in other countries. Concerning the four French ports[3], there has not been much change in the volume of shipments to and from China via Le Havre following the acquisition of the terminals in 2013. But it is worth noting that there was a sudden increase of shipments to and from China via Dunkirk from 2016. Chinese interest in Dunkirk may help to facilitate shipping connections in the post-Brexit era. The CMHI’s engagement deepened further through 2015’s strategic partnership agreement on BRI with CMA CGM, and another step was taken in 2019 with the acquisition of stakes in ten CMA CGM terminals. 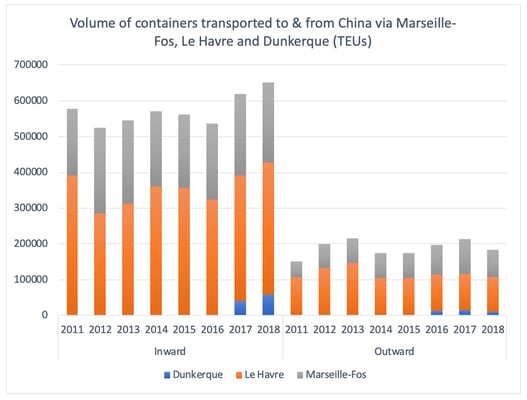 > and in the railway sector in Germany


In contrast we see a strong presence of Chinese interests in the railway sector in Germany. In 2017, the German Railways (Deutsche Bahn), along with Chinese, Polish, Russian, Mongolian, Belarusian and Kazakhstani railway counterparts signed a multilateral agreement aimed at deepening the cooperation in the China-Europe Railway.

The most striking example is China’s cooperation with the Port of Duisburg. Duisburg, as the destination for the first China-Europe railway line launched in 2011, is the hub for the China-Europe Railway shipping lines. In 2019, Duisburg formed a partnership with COSCO Shipping Logistics to build the largest inland container terminal in Europe, with an annual throughput of 850,000 TEUs. In the same year a trilateral cooperation agreement between Duisburg, COSCO and Zeebrugge was launched to develop a hinterland connection. It allows China to expand its multi-modal shipping connections in Europe. In fact, Germany is the only country where the railway outbound shipping figures (Germany to China) are higher than the figures for inbound shipping both in terms of value and volume (Figure 2), this is because German cars and machinery products are the goods that are mainly shipped from Germany to China via rail. 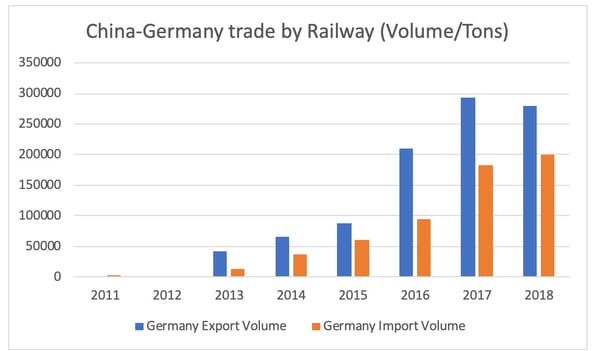 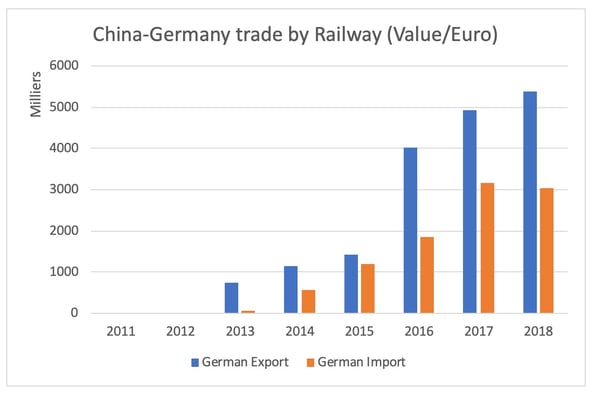 As for maritime shipping, this differs significantly from the French case, as there has been no Chinese acquisition of terminals in any German port[5]. However, it is more greenfield investments in the maritime sector that can be observed. Chinese shipping companies, such as COSCO, have chosen Hamburg as their headquarters for European business. An example of recent Chinese investment is in the Wilhelm port, where a planned 200,000 square meter Chinese logistics center to be opened by China Logistics was initiated in 2019.

Third-party market cooperation, which first appeared in the Joint Statement on China-France Third-Party Market Cooperation in 2015, is a type of economic cooperation between Chinese businesses and other international companies in a third country. It is usually formed between China and industrialized countries to mainly develop infrastructure projects in developing countries.


Of all the agreements signed between China and 14 other countries, the China-France third-party market cooperation is by far the most extensive at an organizational level. China intends to make this agreement an illustration of third-party cooperation. China and France signed two policy documents, including a list of sample projects, and formed three working groups to support the cooperation. Compared to France, China-Germany cooperation in the transport sector is more modest, with no formal state-level agreement and fewer projects.

The majority of China-France projects remain in the maritime freight sector, and those for China-Germany in railway freight. In terms of cooperation partners, CMA CGM continues to take a lead in multiple maritime infrastructure projects, such as the Kribi Port in Cameroon, operated jointly by Bolloré Africa Logistics, and China Harbour Engineering. Similarly, Duisburg Port became a shareholder in the China-Belarus Industrial park development company in 2018 and signed an MoU with PSA (Port of Singapore Authority) in China-Singapore Connectivity Projects in 2019.


The Chinese National Development and Reform Council divided cooperation in the third-party market into five types:

China-France projects are mainly in the format of joint-investment, where French companies are the (co-) operators of the infrastructure projects, for instance concerning terminals or roads. For Germany, the number of projects so far might be too small to make any generalizations. However, among the four projects in the transport sector, two are also through joint investment.

The diplomacy of Sample Projects

Overall, despite the similarity between China-France and China-Germany cooperation at the macro level, the comparison shows that Sino-German cooperation and Sino-French cooperation under the BRI framework do not overlap that much in terms of the fields of projects. China cooperates with Germany mainly on China-Europe railway connectivity, while France is more involved in third-party market cooperation. This absence of overlapping may be associated with China’s strategic use of sample projects in its international cooperation.

It is not new for China to strategically use sample projects for the purpose of promoting the BRI. Probably the most famous case is the Piraeus Port in Greece. China-France third-party market cooperation and China-Germany railway cooperation have all been labeled as sample projects for the Belt and Road Initiative by China. For China, building sample projects in different fields to each other with Germany and France, the two largest economies with major political influence in the EU, not only carries economic benefits, but also political significance.

Even though state-level engagement is very limited, these projects can be labeled as being examples of successful cooperation between China and both Germany and France. In a way, it allows China to effectively insert BRI influence and branding in the EU. Nonetheless, with the setting up of EU FDI screening since 2019, China’s future investment in the transport sector in EU may face certain regulative restrictions.

Notes
[1] Non-regional members are the members not situated in Asia, the Middle East or Asia-Pacific.
[2] China, as the largest donor, has an around 26.8% voting share.
[3] Data for Montoir is not available.
[4] The Wuhan-Lyon line has recently been temporarily shifted to Xi’an-Lyon, due to the quarantine of Wuhan.
[5] Chinese acquisition has mainly taken place in German manufacturing companies.