SPECIAL REPORT.  The “Upply Tour de France of Road Freight Transportation (RFT)” stops off in Centre-Val-de-Loire. A region whose logistical vocation is very marked by its proximity to Île-de-France.

Centre-Val-de-Loire is the result of the merger of the Centre and Val-de-Loire regions in 2015. The region has 6 departments, which extend from the Paris basin to the start of the Massif Central. It is one of the smallest regions in mainland France in terms of population volume and GDP (see the figures at the end of the article).

The 2.6 million inhabitants are mainly distributed between the Loire Valley and the territories near the Paris region with 2 metropolitan areas, Orléans and Tours, to which are added major cities such as Bourges (Cher), Blois (Loir- et-Cher), Châteauroux (Indre) or Chartres (Eure-et-Loir).

The employment rate in industry for Centre-Val-de-Loire lies at 22.4%, against a French national average of 16.3%. In general, "the north of the region benefits from high-tech industries with high added value, while in the south we find heavy industries and agricultural activities," indicates the Centre-Val-de-Loire Chamber of Commerce and Industry, specifying that the Loire corridor is characterized by a greater concentration of retail and services. In a study on logistics carried out in 2017 at the request of the DREAL Centre-Val-de-Loire, the public research institute, CEREMA Normandie-Centre, goes so far as to speak of a “north / south divide”, with more growth industries in the north and more traditional ones in the south.

The main sectors represented are the agrifood industry, plastics, pharmaceuticals and cosmetics, metallurgy and the rubber sector. The Centre-Val-de-Loire is home a number of important establishments.

In the field of agriculture, the Centre-Val-de-Loire constitutes "the primary cereal region in France and Europe thanks to the large farms of Beauce to the North of the Loire", underlines the region's prefecture, which also highlights the region's importance in French goat farming (11%), as well as its now well-established place in the wine sector.

A logistics support base

This economic fabric, associated with "a privileged geographical position in North-South European trade, a close proximity to Île-de-France and an excellent motorway network", has enabled the development of a significant logistical activity, "in particular on the Loire corridor”, notes the CCI. “The Centre-Val-de-Loire region is structured by a network of national roads and freeways 1,330 km long. In terms of density, the region comes in 3rd behind Île-de-France and Hauts-de-France with 34 m/ km²", confirms the CEREMA study, however, noting a "heterogeneous development of the network". The north of the region is the best supplied with structuring roads".

According to The Atlas of warehouses and logistics areas produced by the Transport Ministry’s Observatory and Statistics Services, the Centre-Val-de-Loire region was ranked 7th nationally in 2015 with 286 warehouses of more than 5,000 m². It also stood out with an average surface area of 17,700 m², slightly higher than the national average. “With 380,000 m² of warehouses created on the northern fringe of the region (Loiret and Eure-et-Loir) between 2000 and 2014, the region has benefited from its proximity to Île-de-France to become a logistical support base ”, analyzes the CEREMA. "In particular, we see the presence of large logistics areas near the large towns in the region," says Pauline Martin, regional delegate of the National Federation of Road Transport (FNTR).

“The region offers available land at an affordable cost. This is obviously a very convincing argument, being near Île-de-France,” adds Philippe Munier.

The Centre-Val-de-Loire occupies a modest place in national foreign trade, since the region was in 11th place for exports and 10th place for imports in 2019. But it has a positive trade balance, with €20.8 billion in exports compared to €20.6 billion in imports. Two sectors alone represent more than a third of exports: pharmaceutical products and perfumes / cosmetics. The first contributes very largely to the positive nature of the trade balance.

International trade is overwhelmingly intra-European, with a strong predominance of Germany in both imports and exports. Outside the European Union, Centre-Val-de-Loire's main partners are China and the United States, again as both clients and suppliers. 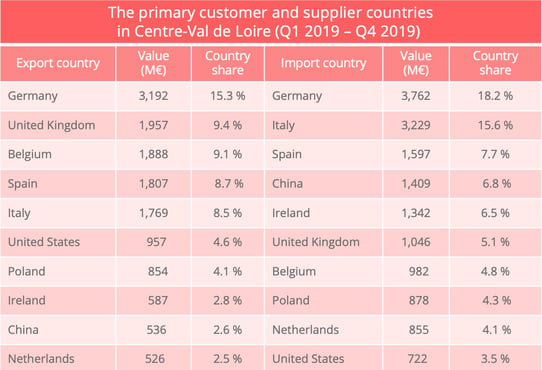 The Centre-Val-de-Loire region in figures