SPECIAL REPORT.  The road freight transportation in the Centre-Val-de-Loire region is on a positive momentum. Global traffic has increased by 4% in 5 years, thanks to internal traffic.

Over the past 5 years, road freight transportation (RFT) in Centre-Val-de-Loire, excluding transit, international traffic and foreign flagged companies, has experienced very clear growth in internal flows. Its share in total traffic increased from 17.5% in 2014 to 23% in 2018. This strong ramp-up will compensate for the decline in incoming and outgoing flows. Global traffic has passed the 15 billion tonne-kilometer mark over the past two years.

The year 2020, as elsewhere, will certainly mark a halt, after an already significant slowdown since 2018. However the prolonged positive development remains the sign of a solid trend.

Breakthrough in trade with the Hauts-de-France

Traffic figures expressed in tonnes tell a slightly different story. In 2018, total regional traffic, excluding transit, international traffic and foreign flagged companies, amounted to 112 million tonnes (Mt), an increase of 3% compared to 2017 and 12% compared to 2015. However, this result remains 2% lower than the peak of 114.4 Mt recorded in 2014. 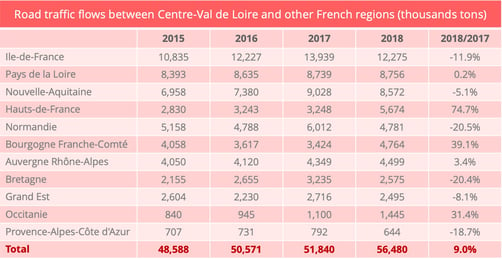 The companies with between 1 and 9 employees represent 57% of establishments with staff, but they only employ 12% of transportation and logistics personnel, while the 8% of establishments with 50+ employees represent 46% of the workforce. Proportions that are roughly equivalent to the national average. In continuous growth since 2015, the entire road transportation and ancillary activities branch accounted for 30,042 employees in Centre-Val-de-Loire. But this dynamic situation is mainly due to a boom in logistics jobs.

The operational results for 2019 and 2020 are not yet available, but the first indicators suggest that the Centre-Val-de-Loire region has held up rather well. For example, the FNTR economic survey for the second quarter of 2020 showed good resilience of carriers during the first wave of lockdowns. The loss of sales and the percentage of trucks lying idle in May and June were rather lower than the national average. “However, the situation varies depending on the type of activity. We can consider that as of last autumn, one in two companies has returned to a more or less normal level of activity in terms of volumes and turnover. But for the other half, the situation remains difficult ”, says Philippe Munier.

As everywhere else, the current context gives rise to palpable concerns. “Surveys of business leaders show a deterioration in the level of confidence in the short and medium term. The shippers have renegotiated rates over periods and in proportions that are unprecedented. The sector is therefore facing great uncertainties,” reminds  Philippe Munier.