China-US trade war: what would a delay of tariffs mean

Another round of an additional 15% tariff on $156 billion of Chinese goods could enter into force on December 15th, at the same time as 5% to 25% tariffs on US automobile and automobile parts by China. On Thursday, Trump's signing off on the Phase One deal in principle may shed some lights on the truce in the on-going trade war.

December 15th is the deadline for concluding the China-US Phase One deal, and it is fast approaching. A no-deal by then would mean another round of an additional 15% tariff on $156 billion of Chinese goods, mainly consumer goods, China’s share of this market amounting to 75% of the total US imports. It would also mean 5% to 25% of tariffs on US automobiles and automobile parts entering into China.

Thursday's update on Trump's signing off on the trade deal may shed light on the truce in the on-going trade war between the world's two biggest economies. So far, no further details have been revealed. It is reported that the upcoming tariffs would not be imposed, and that the US is likely to reduce some of the existing tariffs, in return for Chinese purchase of US agricultural products and the addressing of some of the structural issues, such as intellectual property rights.

A Phase One deal of course would ease some of the market’s anxiety, even if it does not necessarily mean there would be a phase-two deal. Not only do tougher issues remained to be addressed, but the intensified China-US political tensions could also pose uncertainties.

However, there is hope that these tensions would have a limited effect, if any, on the future trade negotiations. China shows a clear tendency to dissociate trade negotiations from the political tension with the US. In response to Trump’s signing of the Hong Kong human rights bill on November 27th, China retaliated with sanctions on US NGOs and the suspension of the US Navy’s visits to Hongkong, but has not touched the tariffs, which was a concern previously expressed in the media.

A willingness to conclude

At the past three months, China has been sending frequent signals that show a willingness to conclude the trade deal before the tariffs are planned to enter into force. On November 24th, the Chinese government announced a plan to further protect intellectual property rights, which is a core issue in the trade negotiations. Beijing also announced that it will waive the tariff on US soybean and pork, and so enhance the import of US agricultural products, another critical topic in the negotiations. Chinese purchases of soybean imports from the US has significantly increased in recent months, with a peak this September, the highest level in the last two years. Of course, whether this behavior would continue in the post-phase-one-deal period or are simply tactical moves to conclude the phase-one deal remains to be seen. 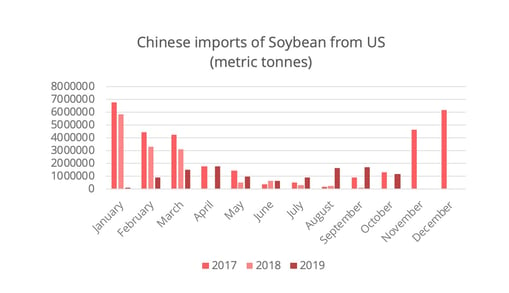 Reaching a deal is vital for China as a means of addressing the continuing economic slow-down. The trade war has severely damaged the export-oriented Chinese manufacturing industry, since the export orders have now been in contraction for 18 consecutive months (figure 2). 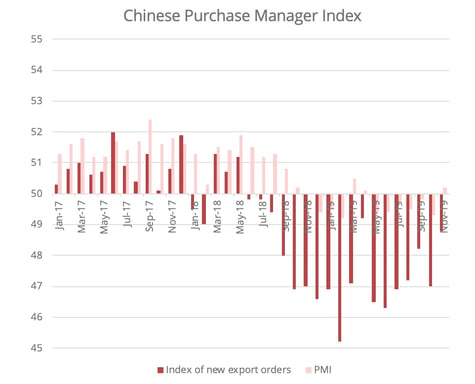 On the other hand, concluding a deal may boost Trump's confidence in applying further tariffs to its other trade partners. This is particularly the case for the EU. Recently, Trump has shown a clear desire to increase the heat in the trade tensions with the EU, and in particular with France. Following the recent $750 million tariff on European goods in retaliation over the subsidies of Airbus, the US has now threatened to impose a 100% tariff on French cheese, wine and other goods, in a response to the French digital service tax. During the recent NATO summit, the threat of trade sanctions was used as leverage by the US in a bid to force its European counterparts to reevaluate their contributions to NATO. This strategy does not concern just the EU, as Trump has also announced that he will restore tariffs on steel products from Brazil and Argentina, who are being used as suppliers of soybeans by China as an alternative to the US.

At the dawn of December 15th, while Trump's signing off on the phase-one deal brings its lot of promises, the ups and downs of the China-US negotiations mean that there is still a long way to go.