In this second article about Liner Terms, Upply proposes an exploration of the reasons for aligning these general sale conditions used by shipping companies with Incoterms®. The aim is to make the cost sharing boundaries more tangible and, as far as possible, concurrent.

Aligning Liner Terms with Incoterms® is not obligatory. Nor does it prevent the bill of lading from being properly executed, as we indicated in the first part of this series of articles on understanding shipping companies' rate offers (LINK). Designated forwarders can take care of any additional billing after the event. But alignment is an undeniable source of efficiency and, indeed, of savings, as we will show through a number of examples. It should be noted that, throughout this article, we will be referring to exports from Europe and that we will be concentrating on the most common situations encountered in container shipping. 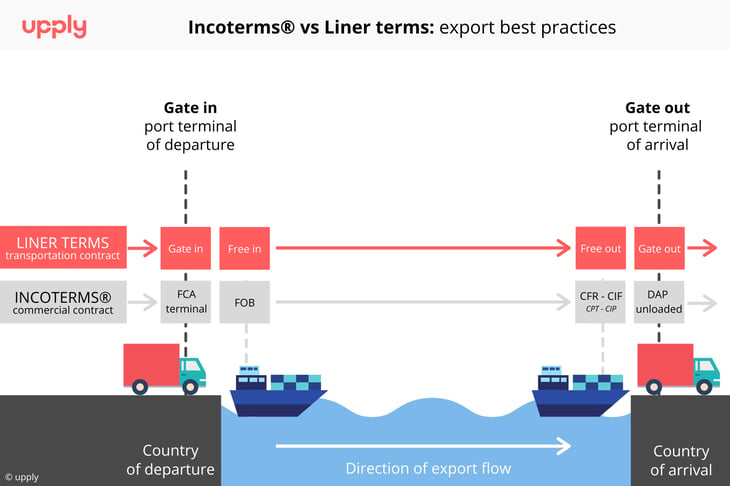 It is in the interest of the buyer who bears responsibility for the whole bill of lading to choose a shipping company able to offer him a freight rate payable at destination (freight collect) for a complete service from the point of departure of the merchandise. The forwarder acting for the buyer in the country of origin of the merchandise will pay attention to this but will be obliged perhaps to pay locally in advance for the merchandise to be updated FOB before billing the buyer for this subsequently.

In this instance, it is advisable for the buyer to choose a company offering "Gate In" freight rates at the point of departure. The transfer of costs for the bill of lading and the commercial contract take place, therefore, simultaneously at the gate of the departure terminal. The THC Loading will be included in the freight rate paid by the buyer (paid at departure or arrival according to the terms of the agreement reached).

This alignment, which is perfect for these sales at departure, is one of the reasons for which the International Chamber of Commerce strongly recommends using the FCA Incoterm® for multimodal sales at departure. From Europe, rates are often expressed in GIFO (Gate In - Free Out).

It is in the interest of the buyer, who ultimately pays the cost and chooses the main form of transport, to choose a company offering "Free In" rates at the departure port. In this instance, the freight rate does not include the THC at the departure port. An FOB price in the commercial contract indicates that the seller has included the cost of THCL in his selling price.

Good to know: What happens when, as often happens, an item sold FOB is loaded by a company using the liner term Gate In at departure?

Normally, the seller should refund the THCL (about €200 in Europe) paid by the buyer since it is included in his freight rate. For a single container, the difference is minimal but for an annual tender call involving thousands of containers, this is worth taking into consideration.

Along the same lines, it is in the interests of the shipper to opt for a "Free Out" liner term at the discharge port. The sale of the goods in CIF excludes the THCD. With a "Free Out" liner term, sales terms at the port of departure are coherent. The receiving party will pay the THCD directly at destination. On the other hand, a CFR or CIF sale is not ideally aligned with a "Gate Out" liner term. The seller should not have to pay the THCD, even though he pays it at departure, since it is included in his freight rate. Logically, therefore, he should bill the amount to the buyer although, in practice, this is clearly easier to say than to do…

This "Delivered at Place" Incoterm® fits in logically enough with the liner term "Gate Out" at the port of destination. In this instance, the container is made available to the buyer once it has been discharged from the terminal at the goods' port of arrival. The THCD is included in the freight rate and the buyer takes delivery of the container at his own cost at the destination terminal without having to accept any form of additional billing.

Good to know: in the case of a DAP discharged, it should be made clear which party should bear any possible demurrage and detention fees at the port of discharge.

The preferred options of the big shippers

At international level, the big European shippers prefer to sell at minimum in CIF or CFR port of destination agreed so as to keep control over their main transport flows with the shipping companies with which they mainly do business. Logically, therefore, they buy freight rates based on "Free Out" liner terms at the port of discharge. The THCD is thus paid directly at destination by the receiving party.

Exporters who sell FOB are inclined to switch to FCA Terminal Port of Departure if the shipping terms offered by the shipping companies from this port tend to be "Gate In". FOB remains acceptable if the departure liner term is "Free In", which is becoming rare in Europe.

Out of Europe, most shipping companies offer "Gate In - Free Out" rates except to the United States, for which a lot of "Gate In - Gate Out" rates can still be found.

Good to know: Can a buyer change a shipping company's liner terms?

In practice, the answer is no since they form part of a shipping company's general sales terms. A very big shipper, which makes it a pre-requisite in a negotiation can nevertheless obtain ad hoc modifications with a view to better aligning his commercial bids with those of his chosen transporters.