Container shipping: why freight rates are holding up

Nothing seems able to disturb the tight capacity control strategy which has been exercised by the top ten shipping companies since the Chinese New Year on east-west trade routes. As a result, freight rates are holding up at high levels despite the fall in global demand.

It has taken the Covid-19 epidemic to make us fully aware of the concentration which took place in 2017, when the three major container international shipping alliances were set up. Despite the fall in demand, no member of any of these alliances has so far dared to embark alone on a trade war, which has had the effect of artificially blocking the market at high freight rate levels. The Shanghai-Antwerp line provides a clear illustration. 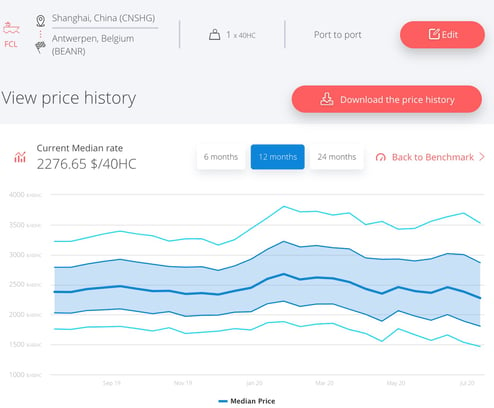 Controlling capacity “whatever the cost”

Those with suspicious minds might be tempted to see this capacity control as collusion. We consider that this is not at all the case. In the first place, breaking competition rules would be to play an extremely dangerous game, attracting the risk of fines of millions of dollars for any company found guilty. Secondly, any other capacity policy would be quite simply suicidal. There is no third way. Companies either continue as they are or start a trade war that no one wants or can afford to contemplate at this time.

Shipping companies are therefore maintaining discipline to get them through the tempest provoked by Covid-19. They restrict the availability of space aboard ship “whatever the cost”, to borrow a phrase used by French president Emmanuel Macron when he announced the start of lockdown in France. The companies prefer to add space when necessary with surgical precision and, if possible, after goods have already been “captured”, which is to say when they are sitting at the departure terminal to be loaded. But the fact that everyone is showing the same sense of discipline does not mean that there is any collusion. It is important to explain this nuance before pursuing.

Price and space are clearly indissociable but the post-lockdown recovery which has been in progress since May 15 has shown that the market is more concerned about access to space than prices. The shipping companies are very much aware of this and this has largely contributed to the creation of the current balance of power. But other less obvious factors are also playing a role.

In this situation, with the peak season approaching, it is clear that the shipping companies have the upper hand in the current balance of power. It is a good bet, however, that they will have the intelligence to avoid taking unfair advantage of the situation and that they will rather try to find ways of securing space for their clients on a long-term basis at prices at or close to current rates. It is not the moment to be trying to win market share through a price war. It is also important for shipping companies to show their ability to foster stability and mature behaviour on the market. Such a wise approach, moreover, would encourage the market authorities to maintain their present indulgent attitude, which, in any case, is only provisional.

In this difficult period, a rollercoaster market would be harmful to everyone. Operating restrictions are too great and too energy consuming. An additional increase in freight rates during the summer cannot be excluded, moreover, as is demonstrated by Upply’s forecasts for the Asia-Europe trade corridor in the graph below. The need to rebuild basic stocks and then constitute new buffer stocks at continental level should help to sustain demand at the start of the second half.

The shipping companies showed great intelligence in preserving their interests at the height of the Covid crisis. Let us not, however, forget, that cargo volumes are expected to fall 11% even according to optimistic forecasts. The cargo volumes lost in the first half will not be recovered, particularly with ships operating at commercial speeds of 10 knots per hour. And the sector remains at the mercy of a shipping company deciding to break ranks in the hope of taking advantage of a still too fragile recovery. Let it not be forgotten either that companies like Amazon and Alibaba could venture into the shipping business as a mean of securing their access to capacity…and then sell off their interests to third parties.