Coronavirus outbreak: a potential shortage of meat in China

The health situation is improving in China. But the supply of meat may become an emerging problem and a logistical issue for the coming months, as a collateral effect of the Covid-19 outbreak.

Since the outbreak of the COVID-19, Chinese food supply demand has been experiencing a temporary decrease since the massive closure of restaurants in China and the isolation of the population. However, since the improvement of the domestic situation, the demand for meat is also recovering, though it is still at a much lower level in comparison with the same period last year (Figure1). For instance, the trading volume of the tenth week of 2020 is only around 60% of the same time last year.

A slow recovery in demand

While most restaurants remain closed for dining, food delivery is among the earliest service industries to have resumed. Also, innovative digital measures have been taken to restore business in the food sector. Although recent reports have suggested that the disruption could continue through April and May, a slow recovery in demand can be anticipated if the COVID-19 outbreak in China remains under control. 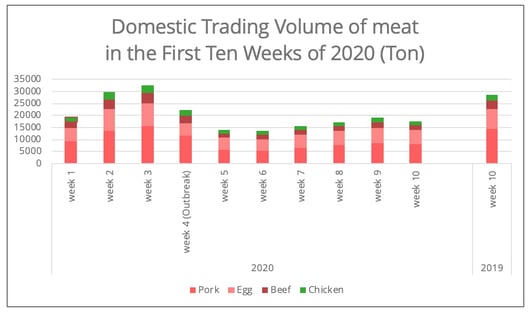 While domestic demand is resuming, the disrupted domestic supply of meat due to the outbreak of COVID-19 could have a lasting impact on meat supply in China.

To start with, the outbreak of COVID-19 has seriously disrupted the supply chain of animal husbandry in China. One obvious and among the most significant disruptions is the supply of fodder, which has been greatly affected by traffic restrictions. This is also particularly the case for poultry production. Hubei province, the center of the outbreak in China, is also the sixth largest domestic poultry supply province in China. Furthermore, the recent bird flu in February in some provinces, notably Hunan and Xinjiang, may affect the production of chickens and eggs. According to the Chinese Ministry of Agriculture, the supply of poultry and eggs may come under pressure in the second and third quarters of this year.

In addition, China is continuing to face a shortage of pork, due to last year’s outbreak of swine flu. The outbreak of COVID-19 has disrupted the resumption of pork production. Furthermore, a side effect of the increase in pork prices in China is an increased demand for substitutions, such as poultry, beef and lamb. With pork prices remaining almost three times higher than those of the same period last year, an even more significant shortage in the supply of poultry can be anticipated.

Global supply under the shadow of a pandemic

The disrupted domestic meat supply means China will turn more to the global market. According to the 2020 forecast by the US Department of Agriculture issued in January, China’s imports of beef, pork and chicken will account for 30%, 37% and 7% respectively, of the total global imports in 2020. Despite the disruption and fall in demand, the import of meat still increased by around 125% in the first two months in comparison with the same period in 2019. Meanwhile, some of China’s main global suppliers are also facing the fast spreading outbreak of COVID-19, which could pose potential logistical challenges to the supply of meat in the future. 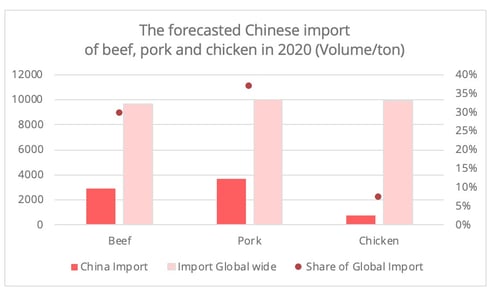 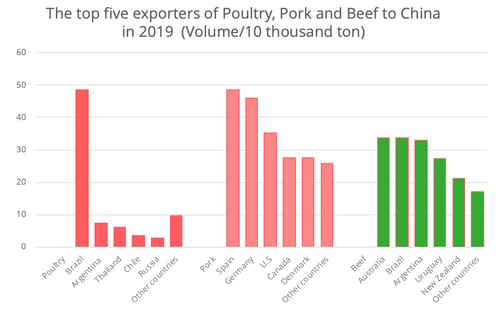 Specifically, China will continue to have a strong demand for pork imports from global market to control the domestic pork price. This could compensate to some degree the loss in domestic demand in some major meat export countries due to their domestic COVID-19 outbreaks, such as Spain and Germany. Furthermore, while China has loosened up the restrictions on importing US pork, this is unlikely to hurt the European suppliers, due to the strong Chinese demand, according to the forecast by USDA.

As China aims to resume swine production by the end of this year, an increasing demand for swine livestock from the global market can be envisaged. The swine fever in 2019 has resulted in a significant decline in the hog herd in China, 27,5% less than 2018. As a result, on March 11th, China imported 2,000 pigs from France via airfreight.

As for poultry[1], the US is likely to become one of the major suppliers to the Chinese market in 2020, along with China’s lifting import restrictions on poultry. Before the Chinese ban on US poultry in 2015, the US was among China’s top three poultry suppliers. Moreover, it is likely that the import of poultry from Thailand has a potential for growth. The geographical proximity of Thailand to China in comparison to other top suppliers makes it a preferable supplier to meet the shortage of poultry.

In the meantime, we need to take into account the logistical scenarios. The disrupted, though gradually recovering, operation of Chinese ports and domestic transportation, has led to a delay in shipment of meat from global suppliers and an increased stock in those countries. The good news is that container shipping activities in China is showing some warming up (figure 4), although there is a shortage of refrigerated containers, with reports of spot freight rates being doubled.

Furthermore, the fast spread of COVID-19 at a global level, particularly in some of the major protein supply countries, such as Germany, Spain and the US could pose potential challenges to the logistics of meat supply.

Under the rapid spread of COVID-19 at a global level, the changing policies in some ports, such as restrictions on crew changes, increased paperwork for port calls etc., can all cause potential disruptions to shipping, whose impact is not only limited to meat global supply. In the meantime, a growing demand for Euro-Asian rail freight can be anticipated as an alternative to maritime shipping of the proteins from European meat suppliers to China. According to China Railway’s statistics, as of February 19th, the China-Euro railway traffic had increased by 8.1% from the previous year.

However, the disrupted road transport within Europe can also pose uncertainties for Euro-Asia shipments. Although the closed boarders and traffic restrictions in some EU countries do not concern the road freight transport, there is a declining road freight transport capacity supply due to safety concerns. This could affect the shipment connections from the farms to either dry ports or seaports.

[1] China has prohibited importing poultry from Germany, Hungry and Slovakia due to bird flu, but their supply of poultry to the Chinese market is very limited.
[2] The eight major ports are: Dalian, Tianjin, Qingdao, Shanghai, Ningbo-Zhoushan, Xiamen, Guangzhou, Shenzhen.