The Coronavirus Outbreak: A summary of its impacts on the supply chain

The coronavirus outbreak is going to have a wide range of impacts on shipping and supply chains, as well as on the Chinese manufacturing industry.

The coronavirus outbreak in China has caused over 300 deaths there since January 2020. On January 30th, the World Health Organization (WHO) declared the outbreak of the coronavirus as a Public Health Emergency of International Concern.

Responding to the outbreak of the virus, following Wuhan’s quarantine on January 23rd, strict traffic restrictions have been put in place across China. The Chinese New Year Holiday has also been extended nation-wide from January 30th to February 2nd. Many provinces, including Beijing and Shanghai, have further extended the holiday to February 9th, with exception to local governments and sectors related to the coronavirus control, including medical equipment manufacturers, logistics, and daily necessities.

With the continuing traffic restrictions, the extension of the Chinese New Year and the wide range of temporary closures of restaurants, stores, and tourist attractions, there will be a considerable number of impacts on shipping and the Chinese manufacturing industry.

Passenger transport entering and leaving China has been seriously affected. 16 provinces have temporarily shut down inter-province passenger road transport. All transport in and out of Hubei province has been temporarily blocked. Furthermore, many international airlines have reduced or canceled their flights from and to China. A growing number of companies and countries have issued travel warnings and travel bans to and from China. The serious restriction on passenger traffic means delays for people who returned to their families for the Chinese New Year and wish to travel back to where they work, as well as disruptions to the international business activities with China.

Freight is also highly disrupted. As central China’s transport hub, Wuhan is located on the Yangtze river, the critical waterway for exports, and serves as a key railway connecting point. Currently, road, railway and air freight in and out Wuhan [1] is only open to medical equipment, medicines and daily necessities (e.g. food and energy supply).

As for river shipping, it has been advised by the Maritime Safety Administration to avoid calling at the Wuhan Port, except for the supply of necessities. Besides Wuhan port, some other major Ports on the Yangtze River have also issued traffic restrictions, which will cause delays for the shipping of goods not classified as medical equipment or daily necessities. Responding to the virus outbreak, carriers, such as ONE and Maersk, have issued notification of disruption of operations on certain lines following the extended New Year holidays.

China-Europe Railway shipping is also inevitably to be affected. To start with, the number of cargos from Wuhan to Europe accounts for 7% of the total cargo movements of the China-Europe railway in 2018. As France (Lyon) is the main destination for railway shipping from Wuhan, the quarantine in place there will particularly disrupt railway shipping to France. It is reported that the railway freight from and to France is currently re-routed via Xi’an.

On a more positive note, for the moment the main border points of Khorgos (China-Kazakhstan) and Manzhouli (China-Russia), where most China-Europe railway shipping lines go through, remain open for containerized railway freight, though passenger transport through these places has been temporarily closed.

For airfreight, on one hand, the urgent need for medical equipment has triggered an increasing demand for airfreight in China, particularly since China is seeking suppliers of these products globally. On the other hand, perishable food airfreight, such as seafood, is reported to be facing a significant drop in demand, due to the large decrease in social gatherings and the shutting down of a large number of restaurants in China.

Airfreight will not be the only mode experiencing decreased demand for fresh food shipping. According to a notification issued by the State Postal Bureau, it recommends customers not to send fresh food during the outbreak of the coronavirus.

The airfreight industry is disrupted in terms of demand, but also in terms of offer. Many airlines have canceled or reduced flights to and from China, including cargo flights.

Manufacturing orders will be delayed

The reopening of factories in China has been delayed, due to the extension of the New Year holiday. Particularly, the five provinces with the highest contribution to the manufacturing industry, Jiangsu, Guangdong, Shandong, Zhejiang, Fujian, have all extended the holiday to February 9th. In 2018, the five provinces together accounted for 42.85% of the total added value for China’s secondary industry. 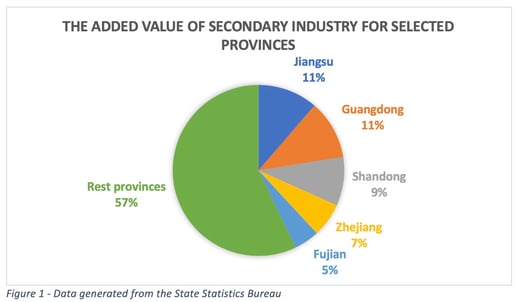 More importantly, even if factories reopen once the extended holiday ends, they could face difficulties in securing a sufficient number of workers. Not only do the travel restrictions mean workers will have difficulty in returning home, but migrant workers from the Hubei province will also be subjected to a 14-day isolation once they travel to other provinces in China in most cases [2]. In some provinces, all people entering them will be subjected to a 14-day isolation, and this is not limited to people travelling from Wuhan or Hubei province. Under these circumstances, delays to Chinese export manufacturing activities can be anticipated, which could trigger a chain reaction leading to temporary decreased demand for container shipping.

This is not just the case in Wuhan. Tesla also announced a 1 to 1.5-week delay to the Tesla 3 production due to the government's order to shut its factory in Shanghai following the outbreak of the coronavirus. Similarly, Toyota has also announced a halt to its operations in China until February 9th.

Furthermore, as Wuhan also hosts a large number of automotive suppliers, such as Valeo, there will be a knock-on effect that will also affect the manufacturing activities of automobiles in other locations. Some are seeking to shift the production to other areas. For instance, Honda’s auto parts supplier F-Tech is reported to be moving its brake pedal production from Wuhan to the Philippines following the outbreak of the coronavirus.

The sharp growth in demand for medical equipment

The urgent increasing demand for medical equipment in China is triggering a temporary growth in demand for supply of these products at an international level. The Chinese domestic manufacturing capacity for medical equipment has so far only been restored to a limited level, 40%, which can hardly meet the enormous needs due to current circumstances.

As a result, China seeks to meet its needs by (1) diverting medical equipment destined for export to supply their domestic market; and (2) seeking out international suppliers. Diverting the export of medical equipment could further affect the temporary decrease in demand for export container shipping. Since January 25th, Chinese Customs has opened up the green channel to facilitate the customs clearance process for medical equipment. According to data from Chinese Customs, from January 24th to 30th, China has imported 56 million medical masks.

This week, from February 2nd to February 9th, will be a crucial period to watch, since people are traveling back to work upon the end of the New Year holiday. The significant human flow will pose an increasing challenge in controlling the coronavirus outbreak. Strict policies to reduce the chances of transmission have been implemented in China. How companies and government will respond to delays in the manufacturing activities sector will be closely followed.

[1] This is also applicable to all of Hubei province, of which Wuhan is the capital city.
[2] The New Year Holiday in Hubei is extended to February 13th.