EU-Brazil trade amid the recovery and outbreak

Brazil is the single largest supplier of agricultural products and the main supplier of raw material for the European Union. Whilst the country is now in the thick of the coronavirus pandemic, this paper discusses the impact of the outbreak in Brazil on the recovery of the EU.

Since May, as Europe begins to resume activity, South America has become the new epicenter of the pandemic, and particularly so in Brazil. The country now has the second highest number of confirmed coronavirus cases in the world. A potential source of disruption for the supply chains between Brazil and the EU.

In 2019, Brazil was the EU's 13th largest trading partner world-wide and the EU was Brazil's second-largest trading partner. Overall, the EU's imports from Brazil are mainly primary goods, including food and raw materials, such as iron ore. Machinery goods, chemical products, and transport equipment are the top three products the EU exports to Brazil.

During the first quarter of 2020, the EU-Brazil bilateral trade was not particularly affected by the COVID-19 outbreak. The EU's exports to Brazil increased by 2.5%, a growth mainly driven by pharmaceutical products. Brazil’s 4% export decrease can be largely attributed to the drop in exports of iron ore, of which Brazil’s share in the EU market has been declining in recent years.

The impact of the Coronavirus outbreak started to become observable in the second quarter. While detailed trade data for April is not yet available, reports suggest that the outbreak in Europe in late March and April has resulted in a dwindled demand for tropical fruit from Brazil, a top supplier of mango and papaya to the EU.

The EU trade forecast estimates that the EU’s extra-Europe exports will drop by 9-15% and imports by 11-14% in 2020. Notably, the EU’s exports of transport equipment and electrical machinery, the top EU goods exported to Brazil, are forecasted to be hit the hardest, with around 15% contraction. Meanwhile, there could be an increased demand for exports of Personal Protection Equipment (PPE) from the EU to Brazil, and South America in general, thanks to the EU’s relaxing of export controls of PPE on May 25th. Regarding the EU’s imports from Brazil, the tense situation in Brazil could prove challenging for the upstream supply chain of the European food and manufacturing sectors.

According to Google’s mobility report, with the gradual easing of lockdown measures in countries that are among Brazil’s primary European food export destinations there is a steady increase in mobility trends towards places such as cafés and restaurants which were mostly shut down during the lockdown period. (figure 1)

Despite reports of repeated infections in Brazil's food sectors, Brazilian beef exports seems to be largely unaffected. However, European beef imports from Brazil, the EU’s second largest supplier after the UK, are likely to drop. This fall combined with the forecast of a slight decline (-0.6%) in the EU’s production of beef, may result in lower meat availability. The drop in imports, however, is not mainly due to the pandemic, but a trade diversion of Brazilian beef to the Chinese market.

The decrease in Brazilian beef supply to the EU market may lead the EU to turn to other major beef suppliers. For instance, in the first quarter, while the EU’s import of beef from Brazil decreased by 2.9%, imports from Uruguay spiked by 66%. However, the EU’s three main South American meat suppliers, Brazil, Argentina and Uruguay, all significantly increased their exports to China (around half of their total exports of beef).

Other food products, such as coffee and orange juice for example, are differently affected. The restrictions on movement in Brazil, due to the pandemic, have resulted in May’s coffee harvests falling behind schedule. Since Brazil is the largest coffee bean supplier to the EU, accounting for a quarter of all imports[1], possible disruption to the coffee supply to Europe in the second half of this year may become apparent. As for orange juice, the EU’s forecasts suggest stable import levels from Brazil in 2020, despite possible logistical challenges due to the pandemic in a context of recovered demand and strong supply.

Meanwhile, from the demand side, this pandemic may be a contributing factor that influences a change in customers’ behavior in favor of locally produced fresh food. While it is unlikely that local suppliers will largely substitute Brazilian beef, this trend could have an impact on the EU’s importing structure of meat in the long run, and as such will need to be watched closely.

The current pandemic in Brazil is also affecting the EU’s steel and automobile manufacturing industries in two ways.

> Firstly, the outbreak in Brazil comes on top of the contracted global demand for automobiles. As such, the worldwide contracted market for automobiles contributes to a plummeting demand for raw material. According to the S&P Global, the 2020 demand for iron ore in the EU (EU-28)[2] is forecasted to contract by 10% or 14 million tons.

> Secondly, the disrupted Brazilian iron ore supply, resulting in a 28% export decrease in May, and growing Chinese demand jointly contributed to a surge in prices of iron ore. On June 1st, they reached their highest point since August 2019. This is certainly not good news for the EU’s steel and automobile industries which are seeking recovery. Since 2018, the EU has begun to look for alternative options to Brazilian iron ore. The current disruption may reinforce European actors’ move towards alternative international and domestic suppliers.

The pandemic has also been posing significant logistical challenges for shipping. Air cargo between the EU and Brazil is experiencing a 90%-100% reduction in demand for belly cargo capacity and an 80%-90% reduction in freighter capacity. The sanitary situation that Brazil is continuing to experience means that it seems unlikely that restrictions will be lifted in the very near future. This lack of capacity has a strong impact on airfreight rates, as shows this example from our Upply database. 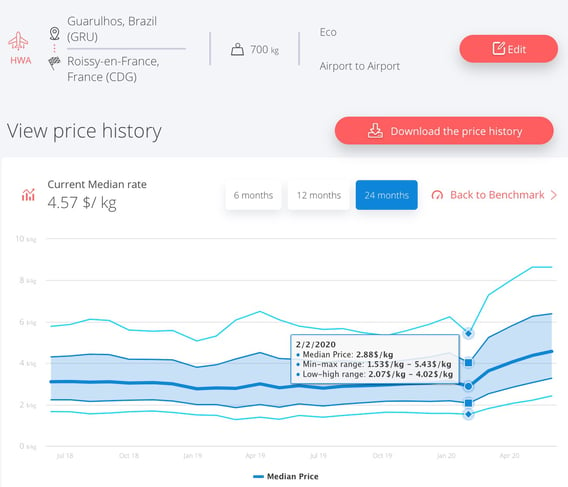 As for ocean freight, container vessels calls at Santos dropped by 7.7% on a year-to-year basis in the four weeks of May[3]. This is in line with the slide in Brazilian trade performance in May, where exports and imports decreased 4.2% and 1.6% respectively. It is reported that the hinterland of South American ports has been especially impacted by the shortage of labor and disruptions in road transportation.

Outside the transatlantic leg, the border check measures between EU member states and domestic measures can also be challenging for distribution within the EU. The good news is that the situation has started to improve. However, the reported shortage of cold chain storage across Europe can be another source of disruption for the EU-Brazil food supply chain. The decline in demand for food, due to containment measures, has forced retailors to stockpile unsold food in temperature-controlled warehouses. With the gradual resumption of activities this situation should become clearer but for the moment uncertainty remains.

[3] The growth rate is calculated from data provided by Datamar.

The combination of the slowdown in European demand, the war in Ukraine and, above all, the Omicron outbreak in China constitute a real "stress test" for the strategy of capacity control put in place by shipping companies at the beginning of the Covid-19 pandemic. The war in Ukraine is now the focus ...
Jérôme de Ricqlès
2 min