EU-Singapore FTA: A pilot for the EU’s ambitions in Southeast Asia

On November 21st, the first EU-Singapore FTA entered into force. It marks a milestone between the EU and Southeast Asian countries. A decade after the 2009 pause in the negotiations that had started in 2007 towards a EU-Association of Southeast Asian Nations (ASEAN) FTA, the EU finally has free trade agreements with its biggest market, Singapore, and ASEAN’s biggest exporter, Vietnam.

Singapore is the EU’s biggest trading partner in Southeast Asia, accounting for almost a third of the total EU-ASEAN trade. In 2018, trade between the EU and Singapore enjoyed a 9% increase, with a record high of 58.1 billion Euros. It is also the EU’s fifth largest global trading partner in services. Signing an FTA with Singapore means opening a gateway to Southeast Asia, and it will serve as a pilot for the EU to expand its trade network and political influence in this, one of the fastest growing markets in the world.

The impact of the FTA on shipping volume will be likely to be more significant on the route from Singapore to the EU than in the opposite direction. Being a highly liberalized economy, prior to the FTA, Singapore had already imposed zero-duty on European goods, with the exception of European beer and stout.

When the FTA entered into force on November 21st, Singapore removed all remaining tariffs on European beer. This will be a welcome piece of news for the Dutch, Belgium and German beer manufacturers, as these are the top three EU beer-exporting countries to Singapore. However, Singapore’s total imports of beer has been declining over the past five years (figure 1). And so, the question remains as to what extent the removal of tariffs will boost the local demand for European beer. Afterall, according to the UN Comtrade Database, Singapore’s top three beer importers are all Asian countries: Malaysia, Vietnam and India. 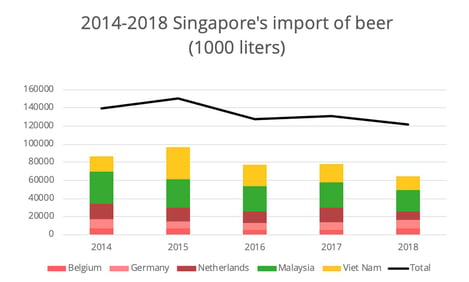 The greatest impact will probably be on the route from Singapore to the EU. Upon the FTA entering into force, the EU removed 84% of the tariffs on Singaporean goods, and this will rise to 90% over the next three years. In particular, two of the top five products in terms of shipping volume from Singapore to the EU, petrochemicals and electronics, are among the products that benefit from the immediate removal of tariffs. A growth in reefer shipping on this route can be envisaged due to the gradual removal of tariffs on fruit and vegetables from Singapore and the immediate lifting of tariffs on pharmaceuticals, which, in terms of value, is one of the top products that the EU imports from Singapore.

Furthermore, the inclusion of an “ASEAN cumulation” clause in the agreement can further lower the cost of imported manufactured goods from Singapore. The “ASEAN cumulation” clause means that raw materials and parts sourced by Singaporean exporters from other ASEAN countries can be regarded as products originating from Singapore when exporting to EU, and as such enjoy the preferential tariffs. This means that the FTA is not just about the EU-Singapore trade, but rather EU-ASEAN trade globally. This is the first time that a Singaporean FTA with counterparts has included an “ASEAN cumulation” clause. This could be an ideal opportunity for EU companies to utilize this clause to develop a regional supply chain in Southeast Asia.

Liberalization of the maritime transport sector

Connecting Asia and Europe, the strategic location of Singapore’s position in the Strait of Malacca makes it the logistics hub of Southeast Asia. The Port of Singapore is the world’s second busiest port, after Shanghai.

The EU is the largest investor in Singapore and has also been one of the major investors in Singapore’s transport sector. Over the last decade, many major European freight forwarders have opened logistics centers in Singapore with the aim of further engaging in the Asian-Pacific regional market, companies such as Geodis, Bolloré Logistics or Toll Group, are just a few to have done so. As such, the FTA will provide further institutional support for European companies in this regard. 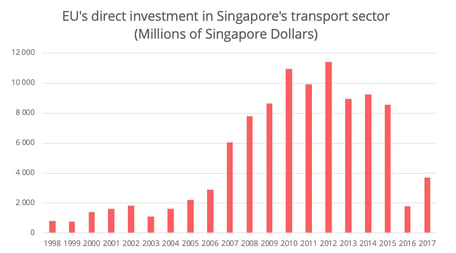 Between 2010 and 2017, which is the most recent data available to us, the EU’s export of maritime transport services to Singapore increased by a factor of 2.5 (Figure 3). However, despite this increase, the share of the Singapore market in the EU’s global exports of maritime transport services remains small, as it represented only 0.7% of the EU’s total exports in this sector in 2017. 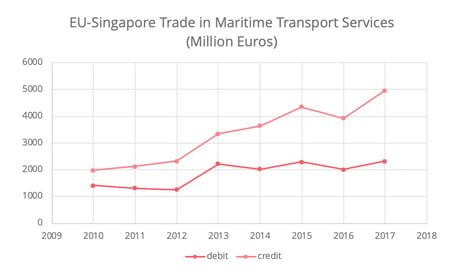 If we compare the EU-Singaporean agreement with the recently concluded EU-Vietnam FTA, we note that the latter granted EU service suppliers access to provide feeder services in Vietnam’s territory under certain specified conditions and subject to a schedule for further liberalization. The geography of Singapore may be the reason for the FTA’s emphasis to be solely on terminals and ports. For the Vietnamese case, foreign carriers have been allowed to provide cabotage services under certain conditions for about 3 decades, for instance, CMA CGM was one of the earliest foreign service providers to connect Haiphong and Ho Chi Minh.

Southeast Asia, as one of the fastest growing markets and an emerging manufacturing hub, has drawn interest world-wide. This August, China also published its five-year land-sea trade corridor plan, aiming to deepen the trade network between China and Southeast Asia, with Singapore being the focal point. As such, this FTA contains perhaps even more political significance and goes beyond trade between the EU and Singapore. It gives leeway to the EU’s aim to assert its political influence and norms on this region, where Chinese, US and Japanese influence is particularly strong.

As one of the “new generation” agreements, the EU-Singapore FTA does not only eliminate tariffs but also highlights the development of more regulated trade relations that address issues such as intellectual property, labor rights and sustainability amongst others. On one hand, this agreement will serve as a model for the EU’s further FTA negotiations with other ASEAN member states, such as Indonesia, and will allow the EU to expand its influence across the region. On the other, for the remaining ASEAN member states, the implementation of this FTA will affect their decision and preferences in either proceeding or restoring negotiations with the EU. Currently, the negotiations in the EU-Malaysia and EU-Thailand FTAs are on hold.

However, due to the political significance that this agreement carries, cooperation at an overall policy level might be seen as a higher priority than the specific implementation at a practical level, according to recent research published by Torino World Affairs Institute, an Italy-based think tank. This report, based on interviews with the practitioners involved in EU-Singapore trade, suggests that there is a lack of clarity on a specific implementation schedule and procedures that will best utilize the FTA. This could be a clear obstacle for future implementation.

Afterall, implementation can be a long process. However, we should hope that it will not be long before the gap between policy and actual implementation is bridged.