The EU-Vietnam Free Trade Agreement (EVFTA) entered into force on August 1st, 2020. An opportunity to examine the initial impacts and to analyze the prospects for the future.

As the most ambitious FTA (free trade agreement) the EU has ever signed with a developing country, the EU-Vietnam Free Trade Agreement (EVFTA) will mutually lift 99% of the tariffs within ten years [1]. The time has come to examine its effects and see if there are already some observable results on the EU-Vietnam trade, and more importantly, estimate what we can expect in view of the global economic recovery forecast for 2021.

The EVFTA at a Glance

Immediately on the EVFTA coming into effect, duty was lifted from 65% of EU exports to Vietnam and 71% of Vietnamese exports to the EU. For instance, all EU exports of textile to Vietnam are now subjected to zero tariffs. Similarly, Vietnamese shrimp becomes duty-free, and rice is granted duty-free tariff rate quotas. However, the tariff on most top trading merchandise from both sides will be gradually lifted only after 5 to 7 years. This is the case, for example, for EU vehicles and car parts and Vietnamese shoes entering the markets.

As such, a more significant trade change is more likely to be observable at a later stage of the EVFTA implementation process. Vietnam’s Ministry of Planning and Investment estimated a 42.7% increase in Vietnamese exports to the EU by 2025 under the agreement. The European Commission forecasts a 29% growth in EU exports to Vietnam by 2035.

The agreement came into force as the Covid-19 pandemic was causing disruption to global trade. In terms of value, the first seven months of the EVFTA (August 2020-February 2021) saw the weakest trade performance in the last five years for the same period. In particular, the value of EU exports to Vietnam fell by 10%.

However, volumes show a different trend, with a 40% increase in EU exports to Vietnam and a 6.8% increase in exports from Vietnam to the EU (Figure 1). Such a jump in EU exports to Vietnam in volume terms can largely be attributed to the increase in raw wood material (HS code 4403) in February 2021. Wood and its related manufacturing industry form a strategic sector in Vietnam, and as such could be associated with the increased demand. Vietnam is the second largest EU Export destination of wood in the rough (HS code 4403) outside of Europe, after China, both in terms of volume and value. 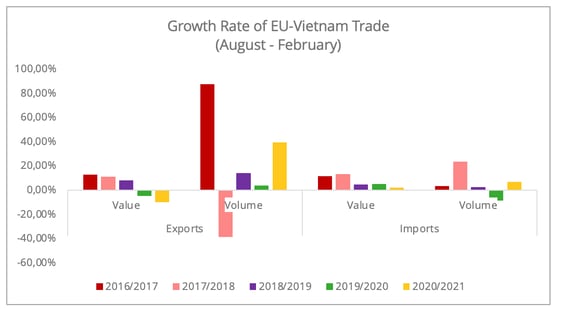 However, this increase is not necessarily linked to the EVFTA. For instance, EU exports to Vietnam in electronic machinery sector (HS code 85) increased by 50% in value and 25% in volume seven months after the entry into force of the EVFTA. However, correlation with the agreement is limited as the products whose exports increased the most in this category, namely electric generating sets (HS code 8502) and electrical accumulators (HS code 8507), were already tariff free prior to the EVFTA [2]. This increase could therefore be more related to the rebound of the economy in the second half of 2020.

It should be noted, however, that in the seven months post-EVFTA, EU-Vietnam trade has outperformed overall EU trade with other countries outside of Europe. The EU exports to Vietnam fell by 10%, while EU exports to third countries fell by 19%. Similarly, EU imports from Vietnam increased by 2%, in contrast to a 10% drop in global extra-EU imports (Figure 2). 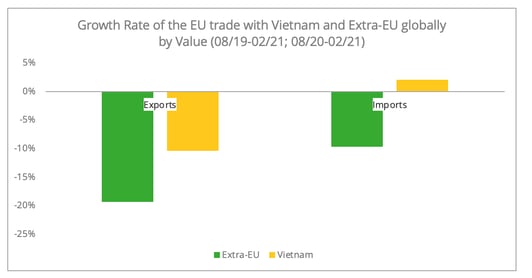 It can also be seen that EU trade has performed better with Vietnam than with other Southeast Asian countries, with the exception of a slight lead in exports from Malaysia (Figure 4). Trade between the EU and Vietnam has also grown consistently over the past several years, signaling a deepened bilateral economic connection (Figure 3). In 2020, Vietnam surpassed Singapore and became the EU’s largest trading partner in Southeast Asia. 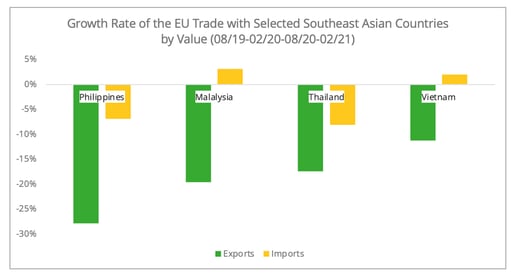 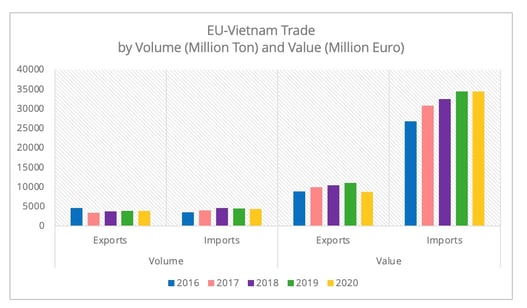 While trade statistics between the EU and Vietnam over the past seven months have not told the most optimistic story, there is certainly a brighter outlook, particularly in light of the expected economic recovery in 2021.

According to the EU interim economic forecast, the EU trade with extra-EU countries will experience a projected 6.5% growth in exports and a 7.5% increase in imports for 2021. In the EU-Vietnam case, as most Vietnamese exporting products are consumer products, the gradual warming up of retail demand along with the economic recovery means a growth in imports from Vietnam (Figure 5). Tariffs on the majority of consumer products produced in Vietnam and destined for Europe will only be gradually liberalized in three to seven years. But the removal of non-tariff barriers, such as simplification of the Vietnamese customs clearance process, will improve trade and shipping facilitation. 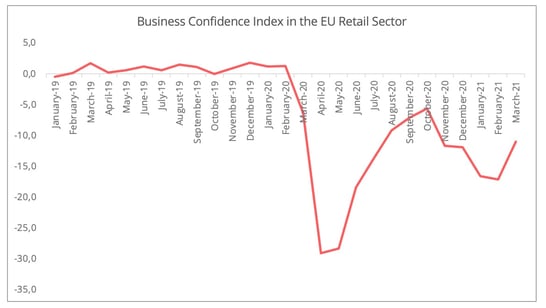 Furthermore, the acceleration of the digitalization process caused by the pandemic is also generating increased demand for Vietnam-made information and communication technology (ICT) products. The country was the world's 7th largest supplier of such products in 2019. It is also a major supplier to the EU, accounting for 13% of total EU telephone set imports in 2020 [3], for example.

In the long term, the EVFTA should enable EU companies to be better prepared for two major structural changes in the global supply chain. These are diversification and regionalization, which in the context of the pandemic could accelerate. Let us take the example of the textile and apparel sector.

Regarding diversification, the rule of origins introduced under the EVFTA is likely to motivate Vietnam to restructure its textile manufacturing industry, in order to reduce its heavy dependence on Chinese raw materials (58%), and as such better benefit from the agreement. Indeed, the preferential tariffs under the EVFTA apply not only to textile materials from the EU and Vietnam, but also from the ASEAN and South Korea, due to a trade pact with the EU. This therefore also means a possible strengthening of trade links between South Korea and the EU via Vietnam in the textile sector, especially since South Korea is Vietnam's second-largest textile supplier. South Korea accounts for around 16% of Vietnam's total imports in this sector. In addition, the EVFTA and the Investment Protection Agreement between the EU and Vietnam that is currently undergoing ratification, will grant EU companies with a better access to the Vietnamese market, which is among the most promising markets for companies wishing to diversify their sourcing and supply chain.

Regarding the regionalization of supply chains, the EVFTA and the other free trade agreements that the EU has signed with the major Asian economies, namely Japan, South Korea, and Singapore, together provide the EU with institutional leeway to engage in the increasingly integrated intra-Asian market. In the textile sector, the EU’s fully liberalized exports to Vietnam under the EVFTA, enables it to obtain an advantageous position in exporting luxury and technical textile materials to answer the fast-growing demand from the Asian market.

The great potential in EU-Vietnam trade also means growing investment opportunities in the Vietnamese logistics sector, which is in line with Vietnam's ambition to become a regional logistics hub by 2025. The FTA and the pending EU-Vietnam Investment Protection Agreement enable the EU to participate in the provision of various maritime transportation services, including shipping agent services, cargo/container handling, storage, and warehousing, etc.

Furthermore, the positive outlook for EU-Vietnam trade is likely to generate new demand in multimodal shipping (rail-ocean freight). The previously mainly conceptual Southeast Asia-Europe multimodal solution via China now seems more than likely to become an actual offer in the market. For instance, DHL is already offering a multimodal shipping connection from Hanoi via China (Chengdu/Shenzhen) to Poland and Germany. Similarly, Nippon Express has started offering China-Europe rail freight from Suzhou to Hamburg and Duisburg, and China-Southeast Asia rail freight from Suzhou to Hanoi, since February 2021.

The multimodal solution remains marginal, but in the first quarter of 2021 rail-ocean freight volumes between China and South-East Asia showed a YoY growth rate of 88.5% [4] to reach 66,292 TEUs. Volumes between China and Europe also continued to grow in double digits, with an 84% increase in the same period. However, the congestion and shortage of containers for rail freight that has been apparent since 2020 indicates a discrepancy between infrastructure capacity and demand, which could hamper the dynamics of this shipping connection.

[1] For the EU seven years, and for Vietnam, ten years.

[4] This is based on data from the "New International Land-Sea Corridor", a flagship project by Chinese government to enhance the connectivity between Southwest China and Southeast Asia

European Commission, Guide to the EU-Vietnam trade and investment agreements

Business Korean, Effectuation of Vietnam-EU FTA to Benefit Korean Firms Based in Vietnam

Vogue, The verdict on the world’s largest free trade deal

Economy: the 5 major trends to remember from 2021

The vigorous economic recovery was accompanied by strong collateral effects on the balance of power in world trade. A look back at the 5 major trends for 2021 that will continue into 2022. Despite the continuing health crisis in 2021, vaccination coverage and improved treatments have enabled a rapid...
David Thebault
5 min

A More Integrated Asian Economy under the RCEP

A New Chapter for Transatlantic Relations in Sight