Road transport prices in France stagnated again in October 2021, according to our Upply barometer. Despite a highly inflationary context, prices seem to have reached a glass ceiling for the moment.

France has (finally) experienced a respite in its sanitary situation in October 2021. The country has reached a high level of vaccination, allowing it to return to the behaviour of "life before". Under these conditions, the economy continued in October the growth that began at the start of the year. The difficulties in recruiting labour in several sectors of activity, the inflation of prices of raw materials and energy, as well as disruptions in supply, which we noticed in September, were further increased in October.

Despite these constraints, road transport prices have fallen very slightly: less than 0.1% in France in October compared to September, as revealed by our Upply Freight Index (UFI Road France). The price per average kilometre driven as such stands at € 1,433.

On a year-on-year basis, however, prices were up by 3.5% as they were in September. 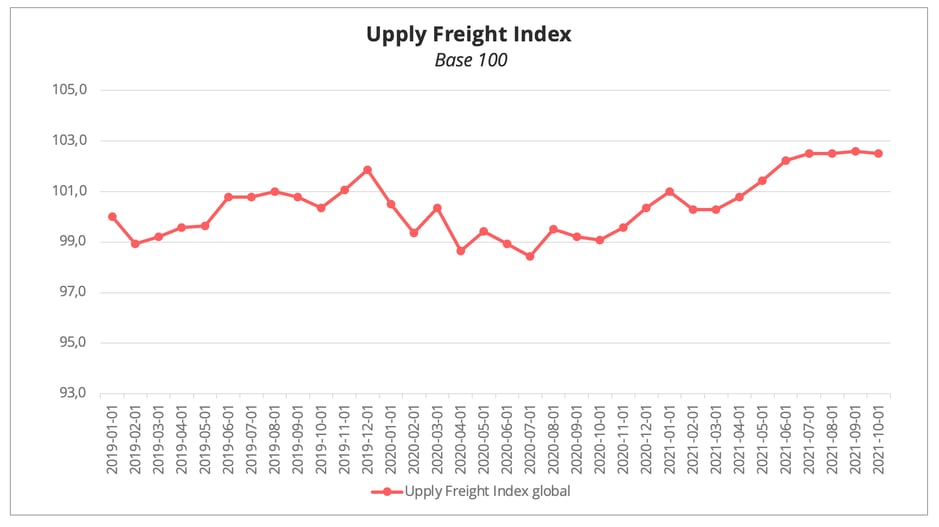 In October, transport in France enters the high season. This is generally the period when demand soars: as it is necessary to supply the retail trade before Christmas, to transport the newly harvested agricultural products or to ensure the transport of goods for construction.

But this year, delays in shipping and supply disruptions in semiconductors are disrupting Christmas restocking. The phenomenon is even more noticeable in the automotive industry, where production has considerably slowed down or even occasionally been interrupted. In its conjuncture report published in early November 2021, the Banque de France noted an easing of supply difficulties in October compared to September, but with significant disparities between industrial sectors.

Please enter your details below to download the whitepaper:

Subscribe to the Upply Freight Index Route France for free