Global air freight volumes fell 4.5% in September 2019 compared to the same month in 2018, according to data from the International Air Transport Association (IATA). IATA is now seeing a slowdown in the downward trend but, in the current economic and geopolitical context, uncertainties remain.

"The longest period of decline since the global financial crisis in 2008," was IATA's verdict following publication of the September 2019 global air freight figures. The volume of freight transported by airlines in tonne-kilometers fell for the 11th consecutive month. The total was 4.5% down on September 2018. At the same time, capacity increased 2.1% in September, resulting in an increase in supply against demand for a 17th consecutive month.

These morose figures are reflected in prices. The trends registered in the Upply data base show that the market was in decline on virtually all major routes in September.

Seasonally corrected data, however, gives some cause for optimism. This data shows that most of the reduction in volume occurred in late 2018 and early 2019 and that the trend seems to have reached a plateau since then. If this trend is confirmed, air freight volumes could start to show positive movement in early 2020.

IATA remains cautious, however, given that several indicators are showing orange and even red:

The figures for air freight volumes by major region in September 2019 show that Africa and Latin America came out best. But these markets represent only a very small share of traffic worldwide. In Latin America, moreover, if domestic traffic flows are excluded, volumes actually fell 3.1% in September.

The Asia-Pacific region, which is the world's biggest air freight market, is continuing to struggle. The region was the first to go into the downward spiral in November 2018 and market weakness is persisting. In recent weeks, moreover, the protest movement in Hong Kong has caused some disruption to air operations, which has made life more difficult for businesses.

In North America, the figures reflect the consequences of the economic war and a fall in export orders, even if this fall slowed a little in September as compared to August. On the basis of seasonally corrected data, however, IATA pointed out that, at international level, the downward trend registered between the third quarter of 2018 and the first quarter of 2019 had been halted.

In Europe, too, corrected data showed that the decline had been stopped. Gross volumes are nevertheless down. The region has, notably, been affected by the weakness of major economies like those of Germany and the United Kingdom against a background of uncertainty about Brexit.

The Middle East showed the sharpest reduction in September 2019 after having enjoyed spectacular growth for years. This region recorded its worst result since the global financial crisis and its sixth consecutive fall in monthly volumes, IATA noted. 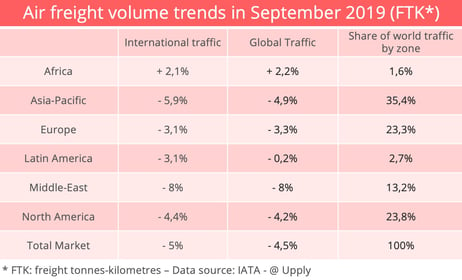