Impact of the Ukrainian conflict on the Asia-Europe container market

The conflict in Ukraine has opened the way to an earlier than expected easing of European demand. This has brought a slight reduction in freight rates but the decrease has been largely outweighed by a return to heavier surcharges.

A sharp rise in fuel prices, an increase in the cost of products of first necessity, the scent of war on Europe's doorstep. This cocktail seems to have knocked householders' confidence and reduced consumption, bringing forward by a few months a development which looked to be sooner or later inevitable.

European demand seems to be marking time at this mid-point in the month of March, which seems to be the less the case in the United States. It is possible that the steady resumption of services and tourism after the Covid wave of January 2022 played a role in the financial choices made by householders to spend less on home improvements and household equipment. The latest developments on the Covid front indicate nevertheless that, with a rise in infections in Europe and massive lockdowns in China, this crisis, which we tend to relegate to second place because of the conflict in Ukraine, is still very much with us.

A slight reduction in freight rates…

The easing of demand was expected by the shipping companies but, perhaps not as soon as has been the case and rather for the second half of the year.

To limit its effects, the companies have opted for the tried and tested technique of blank sailings, which enables them to limit space while keeping as many ships as possible in service. By disrupting Asia-Europe rail freight movement, moreover, the conflict in Ukraine could push certain kinds of freight back into the shipping sector, just in time to make good the temporary weakness being experience in this part of the shipping market.

The shipping companies are also using more dynamic commercial strategies. For the first time for a long time, the big shippers and forwarders with exclusive contracts are back in demand. The dynamic pricing of FAK rates through the use of digital booking systems are showing the first signs of change in this respect, even if they are very modest for the moment - just a reduction of a few hundred dollars on spot prices.

... largely outweighed by increases in surcharges

At the same time, different surcharges are coming back into use, outweighing the slight reduction in freight rates. Particular attention should be paid to emergency fuel surcharges of all sorts, whatever commercial name they are given by the companies.

The fuel component had been taken account of in customers' budgets but more on the basis of a price of USD500 per tonne than USD1,000 per tonne, which was the price level exceeded on the open market in early March. Logically enough, the shipping companies are looking to pass on their additional costs to shippers so as to ensure their operating accounts are not unduly affected.

Market collapse not on the cards

According to our estimates, the break-even point for the big shipping companies operating from base port to base port on Asia-Europe routes has increased from USD1,200/40' prior to the pandemic to USD2,300-2,500/40' today, mainly as a result of the increase in fuel prices and energy transition costs.

That leaves a considerable margin, given current market rates, but puts paid definitively to any idea of a return to previous market conditions. Since a sharp turnaround in the market is not in the interests of the big forwarders either, some reduction in rates is possible but not a sudden collapse. We expect rather the slight easing of rates already seen in the Asia-Europe trade since the start of the year to continue. 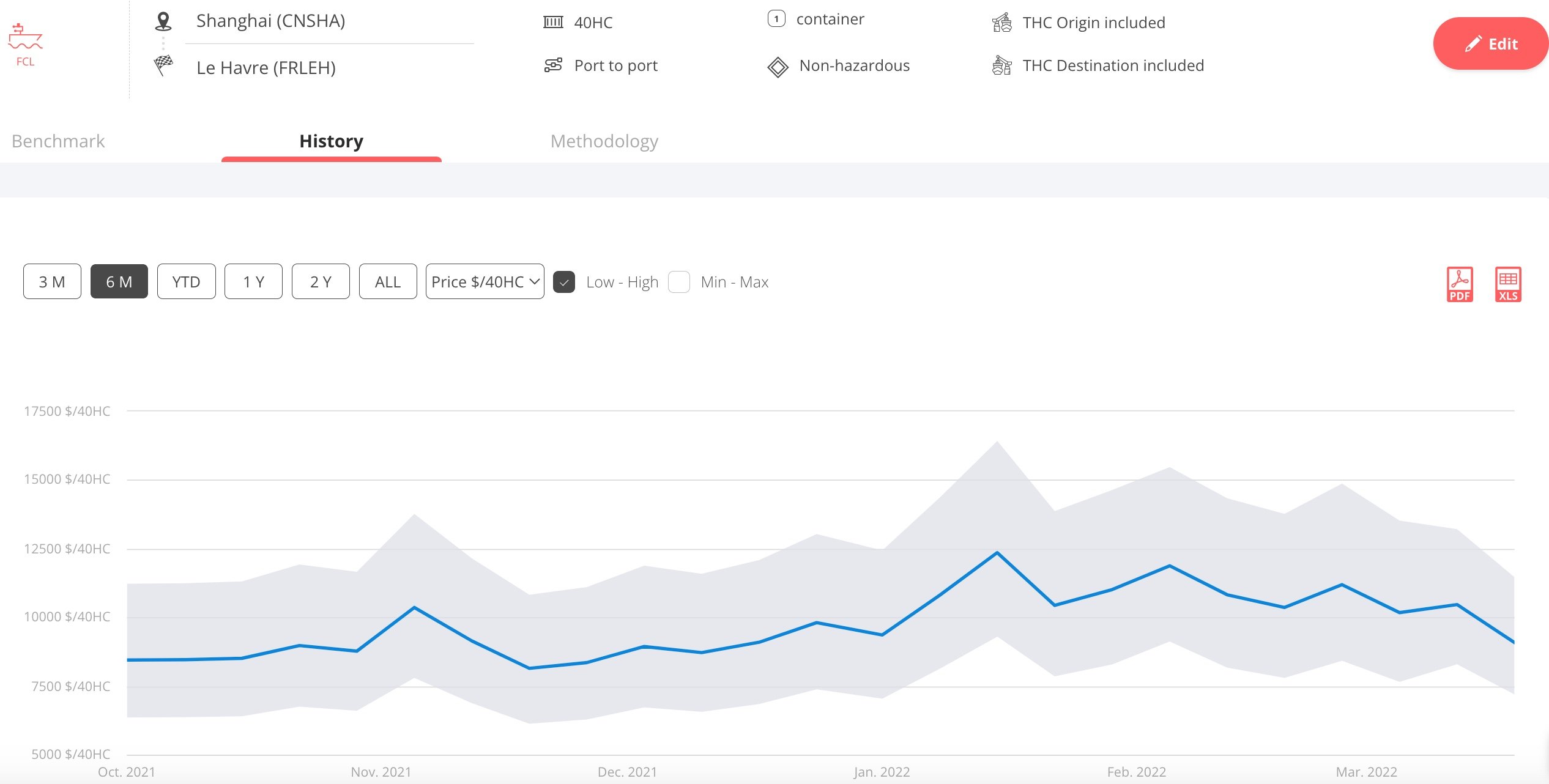 Clearly, this gentle trend could take a sharper turn if there were any radical developments in the conflict in Ukraine or on the pandemic front. Closures or reductions in activity at the Chinese ports, particularly Shanghai, in response to the return of the epidemic, for example, could change the situation.

The good news of the moment, at a time when there is not much of it in Europe, is that the reduction in imports, slight though it is, is giving European port terminals some breathing space and enabling them to reduce congestion.

Supply chain managers should feel the benefit of this in the form of a recovery in downstream operating capacity. This has been impossible since the recovery which followed the end of the first lockdown in spring 2020. The time is now about right for a complete review of procedures, which will need to integrate a mix of new less conventional sourcing practices with existing traditional ones.

Although the conflict in Ukraine and its consequences are dampening European demand, the United States has so far been spared. This is good news for the shipping companies, which will not suffer major problems so long as demand stays strong on transpacific routes.

The American economy has distinguished itself by its capacity to react with greater finesse to inflation than the European economy, even though inflation in the US is higher. The United States has shown itself to be much more flexible regarding salary increases, thus preserving consumers' purchasing power at the risk of increasing debt. Europe, on the other hand, has stuck more to financial orthodoxy, even if it has allowed itself to take some liberties, given the scale of the crisis provoked by the pandemic.

The Long Beach port authorities are nevertheless staying vigilant. The increase is partly due to the reduction of congestion. "Although trade typically slows in February as east Asian factories close for up to two weeks to celebrate the Lunar New Year," the port said in a communiqué, "the port was busier than usual due to continued work to clear shipping terminals and reduce the number of vessels waiting to enter the port." At the same time, the war in Ukraine is still a source of uncertainty in the United States. And, finally, even in a period of economic recovery, demand can be directed towards services at the expense of consumption, as restrictions connected with the Covid-19 pandemic are eased.