India: A promising option in light of the “China Plus One” strategy

The diversification of manufacturing activities is a key driver for 2021 and will enhance supply chain resilience. India could be an option, but the competition is very tough, especially from Southeast Asian countries.

The Covid-19 pandemic has aroused renewed interest for the “China Plus One” strategy to enhance supply chain resilience, by diversifying manufacturing activities into other countries. India stands out as an attractive option thanks to its strategic location, a large domestic market, skilled labor, low labor costs, etc. On top of these arguments the policy offer, "Production-Linked Incentive Scheme", announced in April 2020, is proving to be attractive to Asian mobile phone manufacturers. Will India continue to attract foreign companies as a diversification option via this new scheme that was approved in November 2020 and targets ten critical sectors?

Shifting to India: Who is concerned?

According to the China Business Report published by the American Chamber of Commerce of Shanghai (Figure 1), the Indian subcontinent was among the top four options for relocation or diversification in 2019 and 2020 for American companies, along with Southeast Asia, the US, and Mexico. India has also modestly benefited from trade diversion in machinery and consumer goods such as toys and furniture due to the US-China trade war, though not to levels as significant as those in Southeast Asia.

Figure 1 - Data is generated from the China Business Report issued by the American Chamber of Commerce Shanghai.

European companies seem less enthusiastic to view India as an option under the “China Plus One” strategy. According to the Business Confidence Survey conducted by the European Chamber of Commerce in China in 2020, among the 11% of respondents that are considering the relocation of their investments from China, South Asia ranked tenth (11%), while almost half chose either European countries (26%) or Southeast Asia (23%) (Figure 2).

Figure 2 - The graph is produced using data from the 2020 Business Confidence Report published by the EU Chamber of Commerce in China.

India seems to have greater appeal for Asian companies, especially mobile phone manufacturers (Figure 3). The relocation of Asian mobile manufacturing companies is associated with the Production-Linked Incentive Scheme (PLI) put into place by the Indian government in April 2020. This policy package aims to attract foreign investors wanting to relocate or diversify their manufacturing activities to India, and by doing so improve Indian domestic manufacturing capability. For Taiwanese companies, this may be stimulated by economic and political motives, especially under strained cross-strait relations.

Figure 3 - Some of the relocations of Asian mobile phone manufacturers being reported in 2020; information generated from the internet.

Following the previous success of the PLI, the Indian government expanded the scheme to cover ten critical sectors in November 2020 (Figure 4). It will be interesting to see whether the ten listed sectors can confirm the success of the first phase. 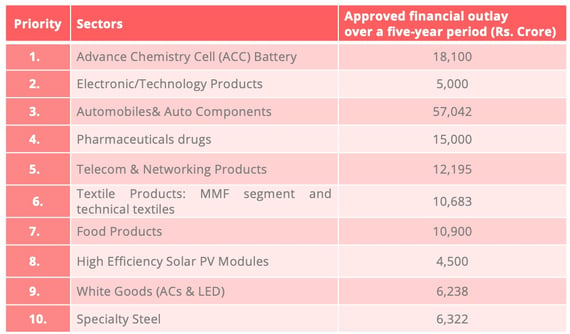 Overview of the Ten Sectors

For several of the sectors listed above, India is facing competition from both reshoring options and offshoring choices.

The ten sectors cover the strategic industries that countries are seeking to reshore, such as electric batteries (Advance Chemistry Cell Battery) and the pharmaceutical industry. Countries seeking more self-reliance in this sector will not only try to reduce dependence on China, but also on India, which is one of the world’s largest pharmaceutical producers.

For some other sectors in the list, such as electronics, telecom, and textile products, India needs to be prepared to face fierce competition from Southeast Asian countries, like Vietnam, Thailand, and Malaysia, or nearshoring options like Mexico for the US. Furthermore, India is not the only country offering policy packages to attract foreign investors for relocation. Multiple Southeast Asian countries, such as Thailand and Indonesia, have also presented offers to attract foreign investors through financial incentives.

One particular disadvantage for India when competing with other countries is its rather inward oriented economic policy. India’s average import duty has been increased significantly in the past few years (Figure 5), which is not the greatest news for industries with a global supply chain. Instead of boosting domestic manufacturing capability, the increased tariffs may prevent India from being better integrated into the global supply chain. 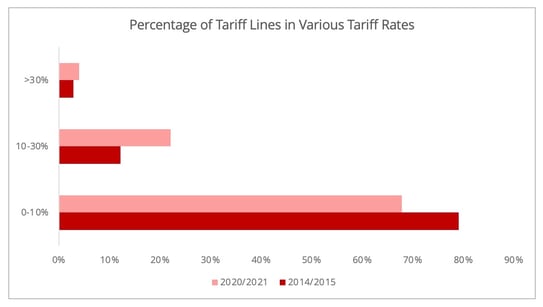 In particular, some intermediate products from the list of ten sectors are also subjected to increased tariffs included in India’s 2020-2021 union budget plan. The motive behind the increased tariffs is undoubtedly to encourage foreign companies to source within India and so boost the domestic manufacturing industry. Nonetheless, frequently changing tariffs and trade policies could damage foreign investors' business confidence. Also, for some products that are hard to source domestically, the high level of tariffs will inevitably increase manufacturing costs.

The potential benefits of the PLI and the large Indian market seem to balance out the negative impact of the extra tariffs in the mobile phone sector to some extent. Despite India’s increase in tariffs several mobile intermediate parts manufacturers announced they would be building plants there. Media have reported that several companies have said there is a link between their investment decisions and the benefits to be gained from the PLI. Moreover, the decision of Foxconn, the world’s largest mobile phone assembling company, to build a production line in India may also attract other suppliers in the mobile manufacturing supply chain to invest in India to avoid the high import duty.

India's withdrawal from the Regional Comprehensive Economic Partnership (RCEP) may be another handicap in terms of competitiveness, especially with Southeast Asian countries which are members of the RCEP. The removal of non-tariff barriers and the reduction of tariffs among the RCEP signatories provide foreign investors with the rationale to relocate within the 15 signatory countries. Some of the ASEAN members, such as Vietnam, Malaysia, and Singapore, are also members of the Comprehensive and Progressive Agreement for Trans-Pacific Partnership. For sectors like textile and automotive manufacturing industries that rely on globalized and regional sourcing, India’s absence from these major trading blocs could be a clear disadvantage. The country can still join the RCEP any time after its entry into force. However, geopolitical concerns behind India’s withdrawal lowered the likelihood of it rejoining the agreement.

The insufficient logistics infrastructure could also overshadow India’s competitiveness as a diversification option. The World Bank Logistics Performance Index has long ranked India at around 40th in the world (Figure 6). According to all the indicators, infrastructure is clearly lagged behind. The “National Infrastructure Pipeline Project”(NIP), a gigantic policy plan adopted in 2019 aimed at tackling infrastructure weaknesses, may change the situation. The transportation sector appears to be becoming the fastest-growing area in India’s infrastructure development with a targeted compound annual growth rate of 5.9%. 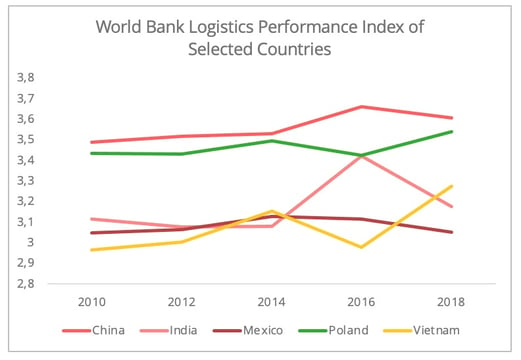 One flagship project is the Vadhavan Port, located 120 miles away from Jawaharlal Nehru Port, India's busiest port on its west coast. Vadhavan Port, expected to be operational in 2025, will be the very first deep-water port in India, with the ability to accommodate large vessels with a capacity of up to 25,000 TEUs. This will be a game-changer for Indian trade by reducing India's heavy dependency on the transshipment via other major Asian ports, such as the Port of Singapore or the Port of Colombo.

Besides Vadhavan Port, the Indian government has also proposed the construction of a transshipment port on Great Nicobar Island in the Bay of Bengal to improve the connection between India and Southeast Asia. Notably among those that would benefit are several relocated manufacturing plants that are reported to be installed around Chennai. A major transshipment port close to this industrial region will optimize shipping connections, especially with Southeast Asia, adding to India's attractiveness as a diversification choice.

India's potential as a future manufacturing hub under the “China Plus One” strategy is also attracting foreign investors in the logistics sector. For instance, in 2019, the Port of Rotterdam established a representative office in India and signed Memorandums of Understanding with the Maharashtra Maritime Board and the government of Kerala, which would tighten the connection with India.

Looking Ahead: a strategic region

To sum up, India may face challenges in reiterating the success of its first PLI scheme. However, companies from countries and regions that already have trade agreements with India may be more inclined to consider India as an alternative to China. Bilateral and Multilateral free trade agreements allow companies to enjoy preferential tariffs and therefore avoid the high-tariff trade barrier set up by the Indian government. Currently, India has signed or is negotiating free trade agreements (FTA) with more than 40 countries, including those in ASEAN (effective since 2010), Korea (effective since 2010), and Japan (effective since 2011). Moreover, industries that are eying the Indian domestic market's potential will also be interested in relocating to India.

Meanwhile, the Indo-Pacific region's political strategic significance, especially concerning China, could generate state-level economic cooperation or partnerships. Other non-Asia-Pacific countries, such as the US, Japan and Australia, published their Indo-Pacific strategies, as have certain European countries like France and Germany. For example, Germany’s strategy addresses economic cooperation with Indo-Pacific regions as a means to avoid unilateral dependence on one country. The political drive may also affect companies’ choices in selecting diversification options. For instance, India, Japan, and Australia are also negotiating to form a supply chain pact to address their dependency on Chinese supply. However, the initiative may carry a more symbolic meaning than have an actual impact.