Road transport prices on the French market continued to decline in June compared to the month of May. Our monthly Upply barometer shows a fall of 1.25%, suggesting a serious crisis for the sector.

Unsurprisingly, the fall in transport prices observed in France is continuing, with June making it a 7th consecutive month of decline according to our Upply barometer. As we can see in the graph below, 2 parameters are of particular concern to carriers: 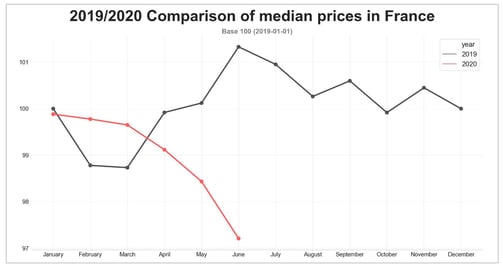 Why are prices still falling ?

In the wake of the doldrums caused by lockdown, positive signals are however becoming apparent on the demand side. The data from INSEE shows that the business climate is improving significantly, although it is still considerably lower than that seen at the same period in 2019 (see table at the end of the article). Our database also shows an increase of more than 13% in the volume transported in June 2020 compared to May 2020. The feedback coming from the profession also indicates a clear tension on the means of transport, at least in some areas. As a result spot prices are beginning to rise again.

So how do we explain the overall decline? Two main reasons can be put forward.

However, this practice may prove to be short-sighted. The risks of a second wave or an isolated and sporadic subsequent lockdown are significant. Transport plans would then be partially interrupted again, giving way to spot charters. Carriers will certainly turn to the shippers with the keenest price bids. Overly-aggressive rate negotiation with carriers now will expose shippers to the risk of a disruption in service in the event of a capacity shortage.

Towards a cash shortage

When we look more closely at inter-regional traffic, we see that some of its flows have actually reached critical levels. As such between the Paris area and the North-East, which are two areas particularly affected by the pandemic, the average price has decreased by 9% for outgoing traffic and by 10% for incoming since the end of lockdown measures. Trade between PACA and Nouvelle-Aquitaine has also continued to see its median price fall by 5% since the lifting of lockdown measures and down 20% since the beginning of the year.

The pandemic is the third crisis in just a few months affecting transport, following the social movements linked to the pension reform and the blockade of ports. In this context, the fall in prices is beginning to be a concern for the profession, and professional organizations have been sounding the alarm for several weeks.

"At every stage of the rebuilding of our country, we will ensure that no one is left by the wayside", assured the President of the Republic, Emmanuel Macron, on July 5th. It is clear that many carriers will however remain at the side of the road if they are not helped. This is because they will neither benefit from the tax deductions associated with the purchase of alternative fuel trucks, for lack of investment capital, nor from the government's new transport mode strategy. A cash shortfall is looming if rapid and concrete measures are not put in place to support carriers, along with the major ambitions of reduction of carbon emissions and modal shift.