Road transport prices on the French market fell in May compared to April. However, the fall is less severe than expected: - 0.86% according to our monthly Upply barometer.

The evolution of French road transport prices in May shows that the resilience factors that we described in April, such as long-term contracts and the absence of foreign fleets, continued to produce their effects. Prices continued to fall, but at a slower pace. One may however wonder how long this situation will last. Already, foreign fleets are reappearing on French territory. 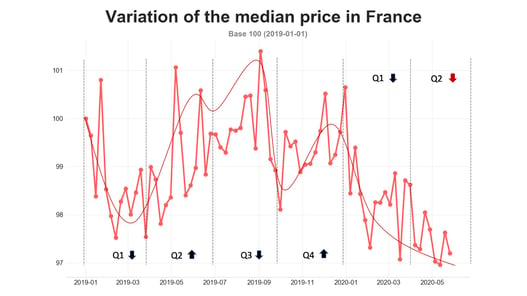 A counter-cyclical downturn in prices

Observation of transport prices in France over many years shows that there is a fairly strong seasonality: the first quarter is bearish, the 2nd and 4th generally bullish, and the 3rd uncertain. The graph above clearly indicates these annual pulsations, of which the year 2019 is very representative.

In 2020, the Covid-19 crisis is upsetting this series of variations. The second quarter is already sharply marked downward, revealing a period of counter-cyclical deflation.

This has been generated by a demand for transport that is lower than supply. The carriers almost all found their full transport capacity after the lifting of lockdown measures while the shippers have been slower to restart: Bruno Lemaire, Minister of the Economy, announced on the radio station France Inter on June 18, 2020 that at the end of May, French industrial production was at 88% of its pre-Covid capacity.

The fall in prices becomes systemic

These downward pressures find a systemic relay in the general state of the French economy. For each of the players seeking to reduce their costs to improve their cash position, the purchasing negotiations are becoming bitter, like those of the Lactalis group which is reducing the price for milk bought from farmers.

By ricochet, transport is inevitably affected too. Moreover, the French road haulage association FNTR, during its fourth survey concerning the consequences of the crisis on the road freight transport sector, indicates that 33% of the companies surveyed report price pressures on the part of the purchasers and observe a sharp drop in chartering prices. An upward trend, therefore, since there were "only" 28% of them to make this observation last month.

This situation heralds the probable end of the key factor in price resilience: long-term contracts. It's a safe bet to say that all contracts between shippers and carriers will be disputed and negotiated downward.

On average, still according to the FNTR survey, carriers lost on average 40% of their turnover during three months (March, April and May). They are also faced with a problem of under-productivity, with a decrease in the number of runs and an increase in empty mileage. Only the drop in diesel prices (see table) moderates a situation which is becoming critical. The profession demands the support of the State and is surfing on the positive image acquired thanks to their essential action during lockdown to back up its claims.