Logistics, an essential cog in the Brittany economy

SPECIAL REPORT. Upply's Road Freight Transport Tour de France is stopping on this occasion in Brittany, with a first article devoted to the regional economy. The region is characterised by the domination of the agri-food sector and its outlying geographical situation.

In 2014, when the latest French local government reform got under way, there was talk of merging Brittany and the Pays de la Loire. In the end, this merger did not take place and each region kept its own borders even though this meant that they would become small regions on the national scale.

Brittany is made up of four departments, two metropolitan areas (Rennes and Brest) and 15 community conurbations. It has a population of 3.3 million, 33% of them in Ille-et-Vilaine, 27% in Finistère, 23% in Morbihan and 17% in Côtes d'Armor. Access to the region relies heavily on road infrastructure. Brittany's particularity is that it has no motorways. The road network is built around two coastal dual carriageways, one running east-west along the northern side of the peninsula and the other along the southern side. In addition, the RN164 trunk road runs east-west through the centre of the region. The upgrading of this road to dual carriageway is nearing completion. Once this has happened, the time required for a heavy goods vehicle to run the full length of the RN164 will be reduced from two hours 45 minutes to one hour 50 minutes, cutting down journey time by 55 minutes.

At issue here is less a congestion problem than the need to improve access to the region. The upgrading of the RN164 will give companies in Brittany, particularly those in the agri-food sector, better access to France's other regions. "For companies, the time reference is essential and market access is no longer counted in real distance but in time-distance," a regional chamber of commerce report noted in 2008. "This is all the more tangible for the fact that the extension of Europe towards the east has complicated the relationship between the companies in Brittany and their markets,"

Since then, this observation has become no less pertinent. "Taking account of our geographical position, we have a duty to be excellent in transport and logistics to ensure that our products are competitive on the other side of France, Europe and the world," said Anthony Rouxel, regional delegate of the Brittany branch of the FNTR national road transporters' federation.

The mainstays of the regional economy

The Brittany economy relies on several key sectors, "starting with agriculture and agri-food and such leading names as Doux, Candia, Marie and Mâtines, to mention just a few", said Philippe Munier, regional delegate for the Paris, central and western French regions at the Union TLF transport and logistics companies' body. Brittany accounts for 23% of French milk production and 43% of egg production, according to the 2020 edition of the Brittany Chamber of Commerce and Industry's key figures publication. The region is also notable for livestock production, accounting for 58% of French pig production, 41% of turkey production and 33% of chicken production. As regards vegetal output, Brittany is largely dominant in France in the production of cauliflowers and artichokes, although, on a volume basis, corn and wheat are the main crops.

As a result of the dominance of agriculture, and with it fishing, agri-food is the main industrial activity in many companies. Companies in this category represent 28% of all industrial firms in Brittany, compared to a national average of 23%. Next comes metalworking and mechanical engineering, which accounts for 25% of companies, putting Brittany in line with the national average, followed a long way behind by chemicals, rubber and plastics with 6.7% and electricity and electronics with 1.9%. "Among the activities specific to the region, we can mention cosmetics, represented by the Yves Rocher group, the automobile industry in the Rennes area and shipbuilding," said Philippe Munier.

By number of companies, Brittany is also above the national average in the retail sector. This sector accounts for 67.3% of all commercial outlets in the region, compared to an average of 64.5% in France as a whole. All the major retail names can be found in the region, of course, but e-commerce is gaining ground. At the end of 2021, Amazon is to open its first logistics base in the region in Finistère, near Quimper. The building permit has just been granted.

Logistics concentrated in the east

These geographical and economic characteristics are reflected, naturally, in the configuration of the region's logistics industry. "Compared to other regions, Brittany is situated away from the major European corridors, like the one linking Lille to Marseilles via the Rhone valley," French national statistical institute INSEE noted in a study of logistics in the region published in September 2018. This has resulted in a smaller number of warehouses and smaller surface areas.

The Atlas of Warehouses and Logistics Zones produced by the French transport ministry's observation and statistics service in 2015 showed that the region had 223 warehouses with a surface area of more than 5,000 m², while average surface area was just 12,800 m². These warehouses are mainly situated along the major roads, with the biggest concentration in the eastern part of the region, according to the INSEE study. "The main logistics operators are based in the Ille-et-Vilaine department, which is the gateway into and out of the region. They are most often located close to the Rennes-Vitré expressway which links the region to the Ile-de-France region, but also along the routes linking the region to the Pays de la Loire and Normandy, thus reflecting the logistical interconnection between the regions." Other logistics businesses are situated are located close to the major road routes in the region, particularly on the RN12 trunk road around Saint Brieuc and the RN164 close to Loudéac and on the RN165 close to Vannes.

The Brittany economy is largely directed towards serving the French domestic market. The region accounts for only 2.4% of French exports by value and 2.1% of imports, with totals of €11.8 billion and €12.2 billion respectively. As such, it figures in last place among metropolitan French regions.

Taking the different product types together, agri-food is the leading export category with a total of €4,075 billion worth of goods sent abroad, 34.5% of total exports from the region. According to the classification established by the regional chamber of commerce and industry, transport materials comes second with a 15% share of regional exports, followed by chemicals, perfumes and cosmetics with 7.5%, agricultural and industrial and diverse machinery with 5.6%. "The agri-food sector's imprint in the structure of Brittany's exports is 24.8 points higher than that seen at national level," it said. "This regional particularity result in other industrial sectors being under-represented, with just a 27.1% share of Brittany's exports, compared to 40.1% nationally."

As regards imports, agri-food is again the biggest category with a 19.2% share of all imports, compared to 10.7% for transport equipment, 9.6% for agricultural, industrial and diverse machinery, 7.5% for chemicals, perfumes and cosmetics and 6.9% for rubber, plastic and mineral products. 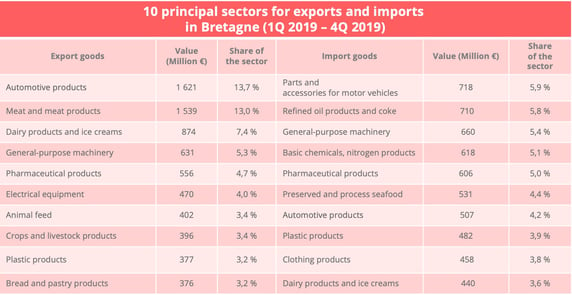 Germany is the region's leading trading partner both for imports and exports. Spain is also in the trop three, along with Italy for exports and China for imports. Overall, the European Union is by far the region's main trading area outside France. 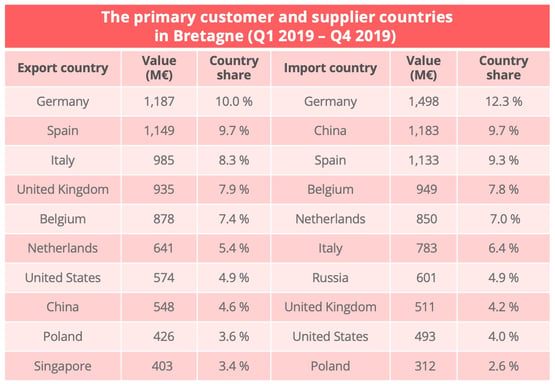 The Brittany ports also offer access to the local market, particularly with regard to the needs of agriculture and the agri-food industry. "In 2016, agricultural inputs (fertiliser, phytosanitary products, seeds and plants) represented nearly a quarter of all Brittany ports' traffic, mostly via the ports of Brest and Lorient," INSEE said in its study of Brittany logistics. The ports also serve to supply energy products and construction materials. They do not, however, play a national role and none of them has major French port status. The three leading ports, Lorient, Brest and Saint Malo, handle nearly 90% of all goods traffic. The amount of freight transported by air, notably via Brest and Rennes airports, is also relatively minimal compared to the volume carried by road to bigger hubs like Paris-Charles de Gaulle Airport.

Road transport occupies a preponderant position in the Brittany economy and we will detail this in the second part of this study of the Brittany transport and logistics sector.