Moderate recovery in road transportation prices in Europe in Q3

The lifting of lockdown measures generated a recovery in demand in the third quarter of 2020, with a certain tendency to catch up with normal levels. At the same time, capacity returned to the market, as such limiting the rise in prices of road freight transportation.

After reaching its lowest level since 2018 at the start of the year, the average road freight rate in Europe rose to € 1,102 in the 3rd quarter of 2020, as was revealed in the latest European Road Freight Rate Benchmark published by Upply and Transport Intelligence (Ti), based on data collected on the main European international lanes. This represents an increase of 1.2% on a quarter-on-quarter basis but a decline of 0.3% year-on-year. The average price per kilometer stands at € 1.62, which is also an increase of 1.2%.

The economic recovery began in the middle of the 2nd quarter of 2020, when most European countries began to lift the strict lockdown measures put in place to stem the first wave of the Covid-19 epidemic. This recovery enabled a return of volumes which drove freight rates higher. However, at the same time, carriers injected back into the market the capacities immobilized at the height of the crisis, which limited the increase in transportation prices. 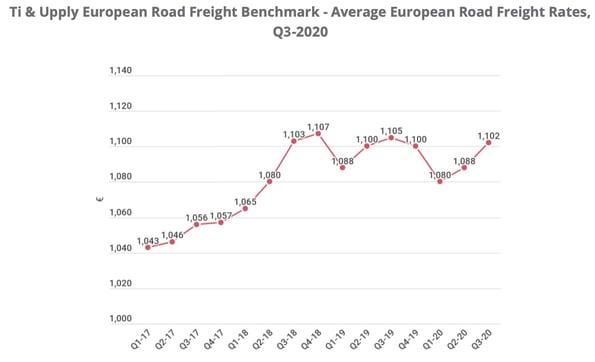 Source : Upply - NB : These estimates are based on actual transactions. The Covid-19 epidemic and its impact on the level of activity have made data collection more complex. The freight rates mentioned for the Q3 2020 period may be subject to revision as new data is incorporated into the Upply database.

On the other hand, recovery has not been the same everywhere. Out of Germany, for example, prices are generally on the rise. On the one hand, the economy of this country was less affected than others during lockdown, on the other it restarted quickly, with Germany producing many essential goods for its European neighbors. In the UK, France and Italy, the recovery was more modest. As for Spain, it is experiencing a worrying situation with several of its traditional economic driving forces stalling, such as automobiles or tourism.

At the end of the quarter, after a July and August that were more dynamic than usual, probably due to the tendency to catch up with normal levels, carriers began to see a slowdown and increased pressure on prices.

"The market still does not resemble the pre-COVID ‘normal’ though, with uncertainty persisting", said Andy Ralls, Quantitative Analyst at Transport Intelligence. Added to this is the second wave of the epidemic and its lot of new lockdown measures, that are often in some ways more flexible than last spring. "While volumes decreased by 60% in certain countries in April, we anticipate a lower impact of the second lockdown decided in several European countries, since more businesses remain open this time. For Q4 2020, we forecast flat prices and even increasing ones on certain corridors", said Thomas Larrieu, Upply’s Chief Data & Research Officer. However, if a more severe lockdown were to be put in place to stem the second wave of Covid-19, the market could then become more volatile.

TO LEARN MORE AND CONSULT THE DEVELOPMENT ON OTHER LANES