Global demand for air freight in October increased 3.5% to 21.1 billion tonne-kilometres, compared to September, according to the International Association of Air Transporters (IATA). The result gave the IATA cause to be slightly optimistic. "This indicates that the year-end will still bring a traditional peak-season boost despite economic uncertainties," commented director general Willie Walsh. The increase is likely to be a moderate one, however, since market fundamentals in the months to come remain a cause for concern.

The October traffic total showed a 13.6% reduction year on year, however. It is true that activity in the final quarter of 2021 was particularly dynamic, thanks to a general recovery in the economy, but traffic in October was also 6.2% down on its October 2019 pre-pandemic level. Over the first nine months, on the other hand, was relatively stable, falling just 0.2% behind its 2019 total, thanks to a good performance in the early part of this year. For several months now, however, air freight traffic growth has been slowing in line with the economy generally. 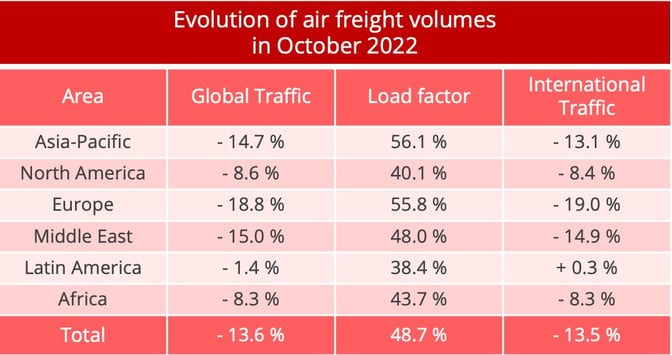 All regions affected by slowdown

No market has been spared by the turbulence. The biggest drop in traffic was recorded by the European airlines, followed by those in the Middle East and the Asia-Pacific region. The North American airlines kept the reduction down to below 10%, however, after having experienced strong growth during the period of economic recovery, while the African companies, which enjoyed strong growth during the period of economic recovery, now find themselves in difficulty, as do the Latin American companies. Their recovery came later than that of the others but looks now to be coming to an end.

In its analysis of results on the major international routes, IATA saw a strong contraction in cargo volumes in October 2022, compared to October 2021. This was particularly the case on Europe-Asia routes (-21.9%), Asia-Africa routes (-15,2%), Asia-North America routes (-13,5%), and, to a lesser extent, Middle East-Europe routes (-4,3%).

Capacity remained under tight control. In October, it was 2% up on September and 2.4% up in the international sector alone, thanks to the start of the peak season. Year on year, however, capacity was down 0.6%. This shows that carriers are taking a cautious approach to capacity management. It is the first time since April 2022 that global capacity has contracted.

The airlines' control over capacity has enabled them to avoid a collapse in freight rates despite the slowdown in demand, moreover, which is the opposite of what has happened in the container shipping sector.

Another fall in revenues expected in 2023

The cycle which has favoured carriers' financial results in the freight sector will come to an end in 2023. According to IATA's forecasts, revenues should reach a total of $149.4 billion next year, which would amount to a year-on-year reduction of 25.8%. The cargo sector would thus account for 19.2% of carriers' total revenues, compared to 27.7% in 2022 and a record 40.4% in 2021. Traffic is expected to fall 4.3% to 57.7 million tonnes. This slowdown will have a heavy impact on cargo yield, which IATA expects to fall 22.6%.

Several different factors are behind this sharp turnaround in the industry's performance. Firstly, the economic situation is deteriorating and global growth is expected to fall markedly. At the same time, inflation, even if it is starting to stabilise and even fall a little, remains at a high level and this penalises consumption and production.

New export orders, which are known to be a good indicator of trends in the air freight sector, are still not showing much dynamism. The global Purchasing Managers' Index, is still below the 50 mark, which indicates that export orders are contracting. "China and Korea registered slightly higher new export orders in October compared to September, although they remained below 50," IATA said, noting that Germany, in particular, has been heavily affected by the war in Ukraine, with export orders below the 50 mark since March.

Finally, there are a number of specific factors which are having a negative effect on air freight. Firstly, after having seen it become more competitive against the shipping sector, the air freight industry is now seeing the process go into reverse. With demand weaker, shippers no longer have any difficulty getting access to capacity and, therefore, do not need to turn to air transport because they cannot find space on ships. Also, ocean freight rates have fallen considerably, particularly on Asia-Europe routes, where they are no longer very far from their pre-pandemic levels. The gap between shipping and air freight rates has, therefore, widened again.

In addition, the strong appreciation of the dollar is bad news for the airlines from the point of view of operating costs. IATA noted that a lot of their costs have to be paid in dollars. Current forecasts suggest that the recovery in passenger transport should nevertheless enable the air transport industry to get out of the red. Net income should reach a total of $4.7 billion next year, compared to deficits of $6.9 billion in 2022, $42 billion in 2021 and $137 billion in 2020.