No peak season for European road transport in Q4 2019

European road freight rates changed little in the 4th quarter of 2019, despite the peak season, indicates the latest edition of the Upply / Transport Intelligence European Road Freight Rate Development Benchmark. Another sign of the market slowdown.

The 4th quarter is generally a period of recovery in transport prices, driven by very strong Christmas demand and therefore an influx of volumes. But as in 2018, the fourth quarter of 2019 saw no inflation in transport prices. A sense of gloom has now settled over Europe with an increase in available capacity. As a first sign of this, the demand for drivers is no longer such a hot topic.
The average European road freight rate, on the 36 international lanes measured in the report produced jointly by Upply and Transport Intelligence, stood at € 1,102 in Q4, up only 0.1% compared to Q3. The average rate per kilometer was € 1.64. 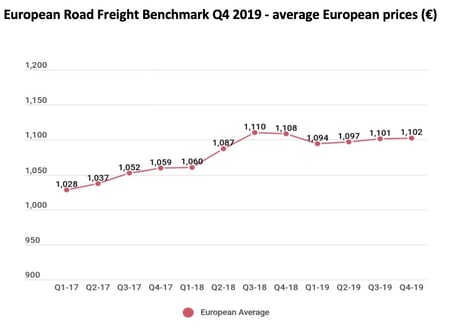 With prices growing on only 14 of the 36 lanes measured, it’s clear that the European averages mask underlying volatility. The largest quarter-on-quarter increase came from the Milan-Warsaw lane (+ 8.8% to € 1,378), while there was a significant drop in freight rates between France and Spain: -2%. The United Kingdom has finally settled into deflation for 2 consecutive semesters.

To find out more and view developments on other lines: