Normandy: a logistics industry with a strong maritime dimension

In 2015, under the terms of French local government reorganization legislation, Lower and Upper Normandy merged to become simply Normandy. The region, which comprises five departments, has one metropolitan area known as name Rouen Normandie, three urban communities and five community conurbations which are linked by what the Normandy Chamber of Commerce and Industry (CCI) describes in its 2019 report as a "dense road and rail infrastructure". The only black spot, according to FNTR road transport federation regional delegate Jean-Marc Pelazza, is the Rouen eastern bypass. The project, which the region has been awaiting for nearly 50 years, has just been approved by the French Council of State but is still being held up by political wrangling. The region has a population of 3.3 million, 38% of it in the department of Seine-Maritime, 21% in Calvados, 18% in Eure, 15% in Manche and 8% in Orne. These figures reflect the distribution of economic activity in the region, which is concentrated in the western part around the River Seine, according to Pascal Vandalle, regional delegation for the Hauts de France-Normandy region of transport and logistics companies' grouping Union TLF.

From the coast to the Paris region

The region's economic profile is strongly influenced by the proximity of the sea. "Normandy occupies a strategic position at the heart of North West Europe and has top-level infrastructures which make it the third biggest port complex in Europe and the biggest in France," says the CCI. "Fifty per cent of France's international shipping activity and 60% of its container activity pass through Normandy."

The Normandy economy also benefits from the proximity of the greater Paris region, Ile-de France, the biggest consumer concentration in Europe. In 2015, the Ile-de-France and Normandy regions drew up a strategic plan for the development of the Seine Valley up to 2030. Its aim is not just to develop a corridor between Paris and the world-class Port of Le Havre. It is also a way of fostering the development of a real industrial and logistical ecosystem. The major seaports of Le Havre and Rouen, which are linked to the Port of Paris through the HAROPA port complex, are due to merge officially in 2021 to create a new authority headquartered in Le Havre. "The new complex, which will be France's leading commercial port, will offer its industrial and export clients a range of global services and will play a more prominent role in the competition with the other big European hubs," the French transport ministry said in a communiqué published on 27 October 2020.

At regional level, too, Normandy is trying to consolidate its port network by uniting its capacities. On 8 January 2019, a mixed syndicate called "Ports de Normandie" was set up to bring together the ports of Cherbourg, Caen-Ouistreham and Dieppe under the authority of the region. These ports may have a card to play in the context of the Brexit process, capturing traffic flows in the event that the usual ports of entry to the north are saturated.

The presence of a major port complex and powerful industrial activities have made Normandy a natural home for transport and logistics activities which represent 5.1% of the region's added value. The Atlas des Entrepots and des Aires Logistiques, which was compiled in 2015 by the Ministry of Transport's observation and statistical service lists 279 warehouses of more than 5,000 m² in the region, with average surface area running at 19,200 m². Of all these warehouses, 141 were situated in "dense logistics areas", most of them in the Le Havre, Rouen and Caen areas.

Many projects should be realised in the years to come as part of the development of the Seine Valley. Last September, the Logistique Seine Normandie association presented the 2020 findings of its land use observatory. Logistics areas were estimated to occupy 1,710 hectares, of which 680 hectares immediately available. This capacity is principally situated in the Seine Valley (40%) and between Caen and Alençon (30%). Normandy should benefit from the growing shortage of space in the neighbouring Ile-de-France region. "On the Seine axis, capacity is largely port-related and multi-modal but with major disparities between Normandy and Ile-de-France in volume terms," the report said. "Ile-de-France has only 35 hectares immediately available, which is exclusively port-related and reserved above all for urban distribution activities which generate inland waterway traffic. In the mixed zone, available sites are single mode, which are spread all over the Normandy region and generally situated near motorway interchanges. These sites are heterogeneous and able to meet companies' endogenous and exogenous development needs and contribute to the development of a logistics network suited to the needs of each area."

Logistique Seine Normandie pleads at the same time for a regional logistics cohesion plan as a means of organizing in the long term and in a concerted fashion the logistics activities in Normandy and the Seine Valley. "In so far as it involves the limitation of the nuisances caused by freight transport, the preservation of reception capacity in strategic areas, close to intermodal points, production and consumer sites, is as much an environmental preservation issue as a question of attractiveness and competitiveness for the port and industrial areas in the Seine Valley," the organisation said.

The role of industry and agriculture

Normandy is characterized by a proportion of industrial jobs which is higher than the national average. Given its presence in automobiles, aviation, agri-food, chemicals, cosmetics, pharmaceuticals, shipbuilding, energy, glass and petrochemicals, the region is notable for having a great variety of industries, including "such industry leaders and major groups as Renault, Peugeot-Citroën, Renault Trucks, Safran, Aptar, EDF, Areva, DCNS, GSK, Sanofi Pasteur and Vuitton," according to the Normandy region website. "With its know-how, Normandy has a real card to play at a time when there is more and more talk of industrial relocation," said Pascal Vandalle.

While some sectors like automobiles and aviation are experiencing difficulties, aggravated by the Covid-19 pandemic, others are showing themselves to be quite dynamic. This is the case in agri-food, the region's third biggest industrial sector, which is benefiting both from the region's agricultural activity and its proximity to top-ranking ports. Normandy is France's second biggest region for dairy produce, as well as for tea and coffee processing, and third for fishing and cocoa processing. Many big agri-food groups are present in the region, among them Danone, Nestlé, Ferrero, Barry Callebaut, Charal, Socopa, Isigny-Sainte-Mère, Elle & Vire and Agrial.

Another expanding sector is the chemicals, pharmaceuticals and cosmetics business. Major international pharmaceutical groups are established in Normandy. The region is, moreover, a member of Cosmetic Valley, the world's leading perfume and cosmetics centre. More particularly, it is "a leading region for the production of high quality bottles for perfumes, spirit and medical products, accounting for 75% of worldwide production".

The value of the Normandy region's imports and exports totalled €77.9 billion in 2019, while its trade deficit came to €7.5 billion. This puts it in sixth position in France for the value of its exports (€35,2 billion) and in fifth position for its imports (€42,7 billion). "Six product categories accounts for 73% of Normandy's exports: chemical products, perfumes and cosmetics, pharmaceutical products, agri-food products, refined oil products, transport equipment and agricultural products," said the Normandy CCI. As regards imports, the oil and oil products sector is dominant, mainly as a result of the importance of the Port of Le Havre, which is a major port of entry serving the whole of France. 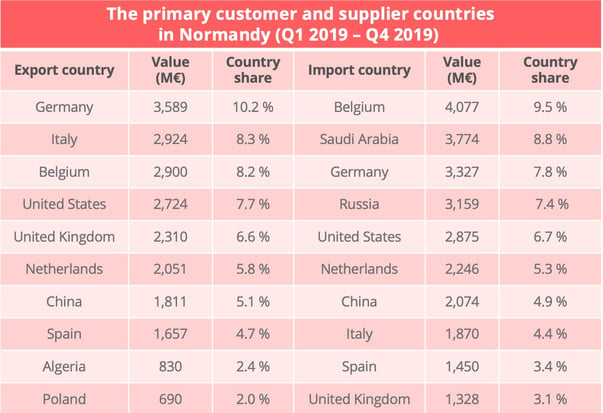 The Normandy region in figures