DOSSIER. Road freight transportation in the Nouvelle-Aquitaine region has remained mostly stable between 2014 and 2018. As elsewhere in France, demand is mainly driven by intra-regional traffic flows.

Road freight transportation (RFT) in Nouvelle-Aquitaine has seen little development in recent years, as indicated by the INSEE in its 2018 economic report on the region. “In 2018, goods transported by road represented 10,595 million tonne-kilometers in the region. Between 2014 and 2018, the average annual increase was 1.9%, while the total volume of goods entering and leaving the region decreased,” says the INSEE. Globally, cumulative traffic fell by 0.1% to around 25 billion tonnes-kilometres.

Like almost all French regions, Nouvelle-Aquitaine showed a rebound from 2017 onward after three years of lows. The tendency slowed down in 2019, and of course no one can predict how the year 2020 marked by the Covid epidemic will end. According to the FNTR's economic survey for the second quarter of 2020, the region appears to have suffered less than others during the health crisis, with a loss of turnover and a percentage of truck layoffs rather lower than the national average. "There are a lot of multi-activity companies, which saved a lot of them from total inactivity. Carriers are used to risk management, keeping their cool and constantly adapting. During this crisis, they showed fantastic agility," says Olivier Hiceb, regional delegate of FNTR Aquitaine.

However, professionals remain cautious. “We are not a heavily industrialized region like PACA or Auvergne Rhône-Alpes. So, we suffer less than others during times of crisis, but we also rebound more slowly," points out Franck Puharré, regional delegate of TLF Sud-Ouest. "The situation remains extremely fragile. The end of the summer break is likely to be complicated," confirms Olivier Hiceb. The Banque de France, in its monthly economic survey of July 2020, notes “a difficult recovery among some customers, especially in aeronautics," which "tempers the volume of global demand driven by the construction and agri-food sectors." In addition, retail distribution appears to be dynamic, "particularly for tourist destinations.”

Transportation figures expressed in tonnes help to put trends into perspective. The latest statistical compendium published by the Regional Transport Observatory (ORT) of Nouvelle-Aquitaine, based on data from 2018, indicates that intra-regional transportation activity decreased from 183.7 million tonnes (Mt) to 162.2 Mt between 2015 and 2018, despite a 5% rebound between 2017 and 2018. Own-account business still made up 52% of tonnages in 2018 but is losing ground. This sector "has been declining significantly in recent years in favor of contracting work for others, which grew by 7.5% between 2017 and 2018," notes the ORT. “The average distance for freight transportation in Nouvelle-Aquitaine was 65 km in 2018, down slightly from 67 km in 2017," the Observatory said.

At the same time, road traffic flow between Nouvelle-Aquitaine and other French regions increased by 7% between 2017 and 2018 to reach 54.1 Mt, but the increase is only 0.3% compared to 2015. Inflow amounted to 26 Mt and outflow to 28.1 Mt. The Occitanie and Pays-de-la-Loire regions together account for half of the trade, followed by the Centre Val-de-Loire, Auvergne Rhône-Alpes, Ile-de-France and Brittany regions. 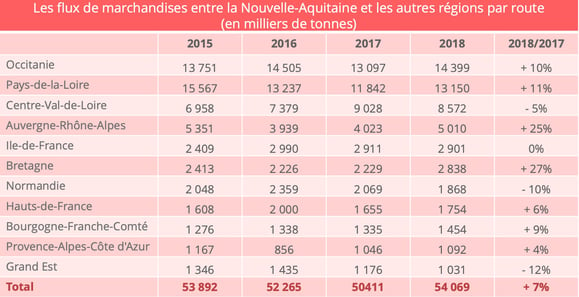 Analysis of product categories shows a predominance of agricultural and fishery products, both intra and inter-regional. The Top 10 list of products also includes food and beverages, textiles and leather, wood and paper, and chemicals. In addition to this list are minerals and petroleum products.

According to the 2019 regional report of the OPTL (Prospective Observatory of professions and qualifications in Transport and Logistics), the road freight transportation sector as of December 31st, 2018 had around 2,000 establishments employing staff in Nouvelle-Aquitaine. Companies with fewer than 10 employees account for 60% of this group, whereas 34% of establishments have between 10 and 49 employees and 6% more than 50 employees. Nouvelle-Aquitaine has in its ranks RFT regional champions such as lGT Solutions group, Doumen group, Transports Hautier, Transports Jammet, Transports Veynat, Transports Rapiteau and also Transports Guyamier, which at the end of 2019 bought Transports Lacassagne. Of course, all the major national groups also have agencies in the region.

Regional actors are facing relatively similar problems to their counterparts in other regions, starting with recruitment and energy transition. On this last point, the Region is working alongside the carriers. "For example, it is partly funding the acquisition of biogas-powered vehicles and also supports the installation of service stations distributing biofuels," says Cindy Viard, Regional Delegate of ORT Nouvelle-Aquitaine.