Nouvelle-Aquitaine: a logistics value chain in need of reinforcement

DOSSIER. The “Upply Tour de France of Road Freight Transportation (RFT)” sets up camp in Nouvelle-Aquitaine. A region that aims to "structure and strengthen its logistics value chain".

The result of the merger of the Aquitaine, Limousin and Poitou-Charentes regions, Nouvelle-Aquitaine can claim the title of Largest French Region, with a surface area of 84,000 m². The population is now close to 6 million inhabitants. “It is a very fragmented region, with on one side very densely populated areas, particularly in Gironde and along the coast to the Basque Country, and at the other extreme with much less populated areas such as the Creuse and part of Corrèze”, says Franck Puharré, regional delegate of TLF Sud-Ouest. The Gironde is the most populous department, with notably the very desirable city of Bordeaux and its urban area, followed by Pyrénées-Atlantiques and Charente Maritime. Vienne, Dordogne and Landes complete the list of departments whose number of inhabitants exceed the 400,000 mark.

A renewed interest in logistics

In terms of infrastructure, Nouvelle-Aquitaine is covered by a network of several major roads. “The North-South corridor which passes through Poitiers, Bordeaux and Bayonne, in the direction of Madrid (via the A10, N10, A63 highways), supports both local, transit and international traffic. The A20 passes through Limoges and Toulouse towards Barcelona. Other highways link the territory from west to east (the Central-Europe Atlantic Route, A89, A62, A64)”, indicates the INSEE in its 2018 economic report on the region. Nouvelle-Aquitaine, with its long seaboard, also has a dense ecosystem of harbors, with two large seaports, La Rochelle and Bordeaux, and two secondary ports, Bayonne and Rochefort. Bordeaux airport, however, plays a rather limited role in the field of air freight, with traffic to Paris mainly transported by truck.

Like many territories, the Nouvelle-Aquitaine region has long neglected transportation and logistics. But times are changing. “We feel that the sector is starting to gain in importance in the region. It must be said that Nouvelle-Aquitaine is faced with very heavy north-south road traffic between Spain and Northern Europe, from which it derives more damage than benefits”, emphasizes Franck Puharré. “Proportionally, the through traffic is not that important. For example, it represents 7% of total heavy goods traffic on the eastern ring road of Bordeaux and is marginal on the western ring road. But the overall density of traffic, especially that supplying Bordeaux, generates congestion as well as noise and atmospheric pollution which is pushing the region to take the subject seriously”, adds Cindy Viard, regional delegate of the Nouvelle-Aquitaine's Regional Observatory of transportation.

Logistical activities have indeed grown strongly over the past decade. "Mammoth warehouses have developed in recent years on the outskirts of Bordeaux, in the direction towards Arcachon Bay", notes Franck Puharré. These include hubs for Cdiscount and Décathlon as well as big names in the transport and logistics sector. "Logistical areas, but of much smaller size, are also located east of Bordeaux, as well as areas in the Médoc that are very specialized in viticulture", adds the representative of TLF Sud-Ouest. A survey carried out in 2015, covering only the Aquitaine area, identified 4 major hubs: the Girondin hub; the Béarn-Basque Country-Dax-Mont-de-Marsan hub; the Agen-Villeneuve-Marmande hub (centered particularly around the fresh fruit and vegetables sector and more generally the agro-food sector); the Périgueux-Bergerac hub. In the other areas of Nouvelle-Aquitaine, logistical activities are also concentrated around large conurbations such as La Rochelle, Poitiers, or Limoges.

The Atlas of Warehouses and Logistics Areas, drawn up in 2015 by the Transport Ministry’s Observatory and Statistics Services, identified 357 warehouses of more than 5,000 m² in the Nouvelle-Aquitaine region at the time with an average surface area of 14,500 m², including 140 in dense logistical areas. But the survey carried out on the Aquitaine area found that the network of this ecosystem was insufficiently wide-ranging. "The economy of Aquitaine needs a more competitive and better integrated logistical value chain between its various links in order to consider implementing solutions that allow, among other things, the deployment of pooling that contributes to competitive solutions and acts as a lever to the deployment of multimodal responses" , was the conclusion of this survey. This project of pooling and developing multimodal solutions remains relevant. The Region has since added to its ambitions a program to support energy transition, in particular around NGV and hydrogen fuels, which goes beyond the simple framework of road freight transportation.

The importance of agricultural production

The dynamic demographics of the region naturally contribute to fueling logistical flows and transportation demand in consumer products. Also, at the level of the region's economy, tertiary activities predominate but agriculture and industry retain a significant weight. The extractive industries, the agri-food industry, beverages manufacturing, the aeronautics and space sector, as well as the wood and paper industry linked to the Landes forest, constitute the main sectors, points out the Chamber of Commerce and of Industry. "We also have a few splendid structures in oil, gas and chemicals near Ambès and Lacq", adds Franck Puharré. In the agricultural sector, wine production is obviously essential, and a source of very significant logistical and transportation flows. The region also relies on strong activity in the cereal sector, as well as in fresh fruit and vegetables.

“All these activities fuel traffic flow, both locally and for export,” notes Franck Puharré. Customs statistics for 2019 confirm the predominance of these sectors. Overall, Nouvelle-Aquitaine represents 4.9% of France's exports (24.1 billion euros) and 4.2% of imports (23.8 billion), thus showing a positive trade balance. The agriculture and agri-food division is the number 1 export sector, with a share of 38.5% of regional exports, against 13% nationally, specifies the CCI of Nouvelle-Aquitaine in its 2019 summary note on international trade in the region. Following behind are chemicals, the wood industry, aeronautics and space construction, the health / cosmetics sector, and the automotive industry. These six sectors represent 71% of regional exports.

On imports, refined petroleum products and coke lead the way, followed by automotive products and basic chemicals. “Nouvelle-Aquitaine presents different particularities compared to the general level nationally for imports of the following products: wood, wooden articles (16.5% of French imports are to Nouvelle-Aquitaine; beverages (16%); refined petroleum products and coke (12.6%) and pulp, paper and cardboard (10.8%), details the summary note of the CCI. 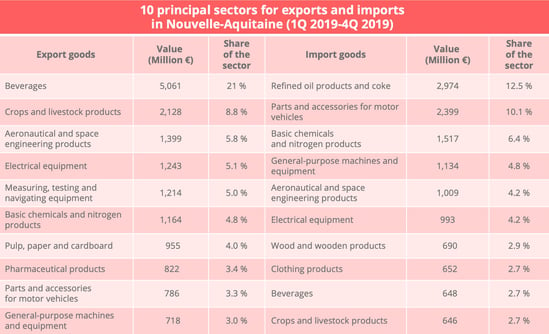 The nature of the productive fabric of Nouvelle-Aquitaine also reflects on the geographical distribution of trade. Export trade with Europe dominates with a share of 60%, but the weight of international trade is much more present than in most French regions (with the notable exception of Occitanie which owes the strength of its world trade to its strong aeronautics industry). America comes second, followed by Asia, which is growing its market share (notably for Singapore, Japan, and China). For imports, 67% of goods, in value terms, come from the European Union. Asia and America are respectively the 2nd and 3rd place suppliers.

The Nouvelle-Aquitaine region in figures