Occitanie: logistical attractiveness to be confirmed

DOSSIER. The “Upply Tour de France of Road Freight Transport (RFT)” makes a stop in Occitanie, with this first article dedicated to its economy. The region is capitalizing on its demographic dynamism and its strong aeronautical and agro-food sectors, but its logistical activities still have room for improvement.

The merger of the former regions of Languedoc-Roussillon and Midi-Pyrénées gave birth to the 2nd largest region in France in terms of surface area: Occitanie Pyrénées/Méditerranée. This vast area with a population of around 5.8 million is characterized by a lower population density than the French average, but with large disparities. Two of its 13 departments exceed one million inhabitants, Haute-Garonne (1.356 million) and the Hérault (1.137 million), respectively crowned by the conurbations of Toulouse and Montpellier.

Most of the economic activity and associated logistical and transport traffic flows are centered around two poles: the Mediterranean arc, including the A9 motorway, which is a major corridor linking the Iberian peninsula to Northern and Eastern Europe; and the Toulouse polestar, which is also connected by the network of freeways to neighbouring regions as well as to the Mediterranean arc. These two poles are also home to air and sea gateways. Toulouse-Blagnac Airport ranks 1st among provincial cargo airports thanks to aeronautical sector-related traffic, with 66,300 tonnes processed in 2019. On the Mediterranean coast, the port of Sète demonstrates a certain dynamism, with six consecutive years of growth culminating in traffic of 4.3 Mt in 2019. Port-Vendres also plays an important role in the agricultural and agri-food sector.

The regional economy is faring quite well. "From 1990 to 2008, GDP, net of inflation, grew by an average of 2.3%, 0.4 percentage points higher than in metropolitan France as a whole. (...) Following the 2008-09 recession, Occitanie's annual growth has reached 1.0%, twice that of the country as a whole," is the observation made in an INSEE analysis note published in July 2019. "Unsurprisingly, the aeronautics and space sector largely dominates the regional economy," says Jérôme Bessière, Occitanie Pyrénées regional delegate of the FNTR. The weight of Airbus is of course predominant, but the group also draws a multitude of subcontractors in its wake. Even though it is mainly located in Haute-Garonne, the aeronautics and space sector feeds "all the region's departments, starting with Lot, Hautes-Pyrénées, Aveyron and Ariège" as is pointed out by the INSEE.

Given the specific features of the aviation sector, this industry is not necessarily the biggest supplier of traffic for road freight transport. The regional economy relies, however, on other sectors such as agriculture and agri-food, notably in the cereal, fresh fruit and vegetable, and wine sectors. The Saint Charles International Market, in Perpignan, claims first place in Europe’s platforms for the marketing, transport and logistics of fresh fruit and vegetables. It is the main European gateway for this sector’s traffic flow, mainly coming from the South.

The region also benefits from a demographic dynamism, with a population that grew by 20% between 2000 and 2018. This trend, combined with the attractiveness of Occitanie as a tourist destination, is conducive to a very significant development of consumer-based logistical activities. "Most retail logisticians have bases in Occitanie," notes Franck Puharré, South-West regional delegate of TLF.

The Atlas of Warehouses and Logistics Areas, drawn up in 2015 by the Transport Ministry’s Observatory and Statistics Services, identified 247 warehouses of more than 5,000 m² in the Occitanie region at that time with an average surface area of 16,000 m2. "Around Toulouse, there are two very large zones for transport and logistical activities: Eurocentre in Haute-Garonne and Grand Sud Logistique in Tarn-et-Garonne", points out Franck Puharré. On the Toulouse-Narbonne corridor, in Castelnaudary, the Nicolas Appert industrial park is also undergoing significant development, including the arrival of Socamil, the regional purchasing centre for the E.Leclerc group, which has invested 150 million euros to consolidate its logistical activity on this site. "On the Mediterranean flank, logistical development is concentrated around the conurbations of Nîmes, Montpellier and Béziers," says Françoise Gleize, the Occitanie Méditerranée regional delegate for the FNTR . This includes the big names in retail such as Auchan, Carrefour, Super U or Intermarché. E-commerce is also an axe for development, though the question of its acceptability has been raised. The arrival of Amazon's logistics project in Fournès, in Gard, is facing growing opposition.

In general, the logistical fabric is still fairly diffuse, but there is real potential for the region. Due to its geographical location, Occitanie is a transit territory between Northern Europe and the Iberian peninsula and even the Maghreb. "If the Covid-19 crisis incites reshoring of production from Asia to the Maghreb, Occitanie may have a card to play. But we must tackle the dual problem that has already arisen: on the one hand how to minimize traffic flow that only brings negative externalities, notably by stimulating combined transport, and on the other hand how to develop new logistical zones offering value-added services that will help to capture traffic flows and thus create value for the region," says Isabelle Bardin , Director of the Occitanie Logistics Cluster, We4log.

In terms of foreign trade, the overwhelming dominance of the aeronautics and space sector gives the Occitanie region characteristics that are not found in any other French region. The weight of aeronautics has earned Occitanie a record trade balance, with a surplus of 12.3 billion, far ahead of the 5.4 billion euros of the runner-up, the Grand Est region. This also enables it to take third place among the largest French exporting regions with a total of 54.4 billion euros in 2019, despite its weak industrial fabric. "Occitanie's mid-cap companies, that are the most capable of exporting, are rare. They employ only 16% of the region's full-time equivalent jobs in non-agricultural and non-financial commercial sectors, the lowest rate in metropolitan France outside Corsica. Exceptions include the fruit-processor Andros in the Lot and the seed company RAGT in the Aveyron, which over the years has become a European player in its field," notes INSEE. There is also a presence in the production of pharmaceuticals and cosmetics, "including the Pierre Fabre Laboratories in the Tarn," says Franck Puharré. These sectors are also included in the Top 10 exports (Figure 1).

The distribution of trade also bears traces of the domination of aeronautics. In other French regions, it is rare for one product type to exceed 20%, both in exports and imports. In Occitanie, the aeronautics sector accounts for almost three quarters of export trade and almost half of imports. The agricultural and agri-food sector is also well represented, with a second place for imports and third place for exports.

Of course, this strong specialization is a double-edged sword. The aeronautics and space sector has been the region's golden goose for several decades and contributes to its demographic attractiveness. However, in the current context marked by a dramatic halt in the development of air transport due to the Covid-19 epidemic, there will be dark days ahead, due to the lack of diversity in the economic fabric. 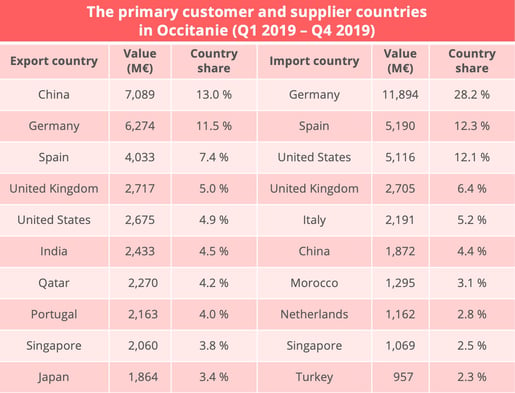 Finally, the specificity of aeronautics has an impact on the geographical distribution of trade in Occitanie. While most of the other French regions trade primarily with European countries, particularly for exports, the profile of Occitanie is much more internationalized (Figure 2). 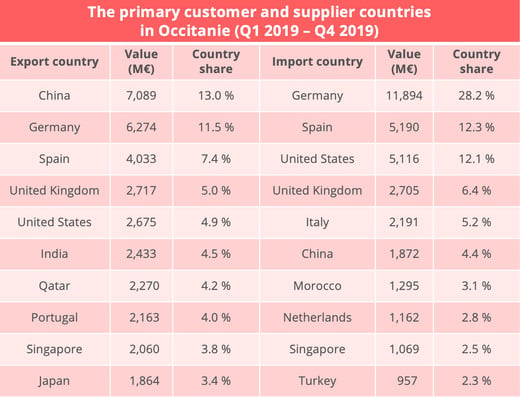 The Occitanie Region in figures