SPECIAL REPORT. The Upply Road Freight Transport Tour de France is stopping off on this occasion in the Pays de la Loire. This first article presents the economic and logistical environment which generates the flow of road transport in the region.

The Pays de la Loire is one of the rare regions which did not have its outline altered in the French local government reform of 2015. In terms of economic firepower, the region has, therefore, automatically fallen back in the national ratings even though it remains no less attractive. Its population, which has been showing dynamic growth with an annual increase of 30,000 between 2009 and 2014, stands today at 3.8 million people. This makes it the French region with the eighth biggest population. Its GDP, which totals close to €110 billion, also ranks eighth. Its GDP per head of population puts it in 4th position, however, behind the Paris region, Auvergne-Rhône-Alpes and Provence-Alpes-Côte d'Azur. "It is a region which has no real historical basis," says Jean-Christophe Limousin, regional delegate of French road haulage federation FNTR, "but, economically and politically, it has shown it has a role to play and that it has the capacity to create wealth."

The metropolis of Nantes, with its 650,000 inhabitants, is clearly a major locomotive but the regional economy is also built around other major conurbations relatively well spread out over the region such as Le Mans, Laval, Angers, Cholet, Saint-Nazaire and La Roche-sur-Yon.

The Pays de la Loire has good road infrastructures, including, notably, the A10, A11 and A83 motorways, but is also served by the port of Nantes Saint-Nazaire and Nantes Atlantique Airport. "Given the region's rapid development, however, its infrastructure needs to be strengthened," according to the regional chamber of commerce and industry. "The region is notably faced with a real congestion problem on the Nantes ring road, which serves the city but also the port," says Jean-Christophe Limousin. "It also serves as a crossroads on the Route des Estuaires motorway complex and as a point of passage to Brittany. All these factors make it an area which is regularly overloaded."

Consideration is being given to construction of a new crossing of the Loire but the project is still on the drawing board. The region has, however, made available €120 million to improve the regional road network in cooperation with the departments. The region's transport website details the work which is being carried out department by department. In Vendée, for example, the region is subsidising work on the road linking the departments two main conurbations, La Roche-sur-Yon and Challans. In the Sarthe, work is under way on a by-pass for Saint-Calais. In Loire-Atlantique, the Viais interchange aims to improve the flow of traffic between the Nantes, southern Loire area and Vendée. In Mayenne, a by-pass is being built on the northern side of Château-Gontier. In Maine-et-Loire, a section of two-lane double carriageway is being built on the RD 775 between Le Lion d'Angers and La Membrolle."

Logistics: a reservoir of added value

The "Atlas des Entrepots et des Aires Logistiques", which was drawn up in 2015 by the Ministry of Transport's observation and statistics service, listed 291 warehouses with a surface area of more than 5,000 m² in the Pays de la Loire region and an average surface area was 14,900 m². Of these warehouses, 160 were situated in "dense logistics areas", which, in general, are to be found close to the major conurbations.

In 2018, the Nantes Saint Nazaire Chamber of Commerce and Industry (CCI) produced a paper on the outlook of the logistics sector and the challenges facing it, stressing its under-estimated role in local development policy, as well as in company strategy. The sector itself is of major importance to the economy of the Pays de la Loire, where it is the fifth biggest employer. It is essential, moreover, to respond to the challenges which are looming. "Logistics is still not well known and is often criticised by local authorities as space-consuming and a poor source of employment, as well as generating nuisances," according to the chairs of the regional CCI and territorial planning commission. "Yet, the years to come are going to change its image under the impact of the digital revolution, the development of e-commerce, the increasing need of companies to become more international, the energy transition and the increasing need to automate/digitalise certain jobs, at least partially." They called for logistics to be made a central concern as a way of making regions more attractive and companies more competitive.

In the Pays de la Loire region, logistics is even more crucial for the fact that the region's economic development depends on sectors which generate major transport flows. According to the Regional Economic and Social Observatory, industry contributes more to wealth production than elsewhere. In 2015, its share of industrial added value amounted to 18%, compared to barely more than 14% in France as a whole. Agriculture and construction play a greater role in the Pays de la Loire economy than in France as a whole, while the contribution of the region's trading sector is similar to the national average. Conversely, services represent a smaller share of regional added value than in France as a whole.

Agri-food is the predominant industrial activity in terms of employment, followed by metallurgy, plastics and transport equipment. Many leading groups and companies are established in the region. Among the flagship companies are Brioche Pasquier, which is based in Cerqueux in Maine-et-Loire, Charal in Cholet, also in Maine-et-Loire, Lactalis in Laval in Mayenne, Fleury Michon in Pouzauges in Vendée, LDC in Sablé-sur-Sarthe in the Sarthe, the Terrena group in Ancenis in Loire-Atlantique and Sodebo in Saint George-de-Montagu in Vendée. In addition, numerous small and medium-sized companies can be found all over the region. Altogether, there are more than 1,000 agri-food establishments employing nearly 50,000 people, making the Pays de la Loire the second biggest agri-food employer in France after Brittany. The dominant agri-food sectors are meat processing and conservation and the preparation of meat-based products, which account for 46% of the sector's personnel, the production of bakery products, pastries and pasta 19% and the manufacture of dairy products 12%, according to the economic and social observatory.

Naturally, this economic system relies on a major agricultural sector. Some 31,000 agricultural concerns are to be found in the Pays de la Loire, 80% involved in livestock breeding and 20% in arable farming, including cereals, vine-growing and speciality products. "There are two key centres: one for vegetable and flower seeds in the Angers area and another for market gardening in the Nantes area," said Jean-Christophe Limousin. The Pays de la Loire is also France's second biggest region by value of production after Brittany for fishing both for fish and crustaceans.

Although agricultural and agri-food activities play a major role in the regional economy the Pays de la Loire also rely on other major sectors like aviation with Airbus, shipbuilding and leisure boat construction with Chantiers de l'Atlantique and Bénéteau and the automobile industry. The leather and textile industry has been through a difficult period but is starting to recovery led by luxury leather goods company Longchamp, a high-value producer long established in the region.

As part of the "intelligent specialisation" approach, which is part of the European Union's new cohesion policy for the 2014-2020 period and which encourages regions to identify priority investment sectors on the basis of existing assets, the Pays de la Loire has identified electronics, robotics, digital and health as priority sectors.

Finally, to develop its logistics and transport business, the region can of course rely on the dynamic growth of its population and its attractiveness as a tourist destination, which, in turn, drive consumption.

Export potential to be developed

Foreign trade figures indicate, however, that the region is little involved in international trade. In 2019, the Pays de la Loire generated 4.4% of French exports (€21.9 billion) and 4.8% of French imports (€27.6 billion), thus registering a negative balance of trade of €5.7 billion. This is the case in most port regions, according to the economic and social observatory. "The imports of the Pays de la Loire are largely correlated to the activity of the Port of Nantes Saint-Nazaire, the Total refinery and the Cordemais power station," it said. "The trade balance of the Pays de la Loire is as a result very dependent on imports of extracted energy products. At the same time, the trade balance is very closely tied to the orderbook of Chantiers de l'Atlantique, where the sale of a single cruise ship can bring in more than €1bn. On the export side, the region is benefiting from the reopening in May 2018 of the Atlantic "Milk Run", which allows aviation equipment to be shipped by Airbus to and from its sites in Montoir-de-Bretagne and Mobile, Alabama, in the United States.

Together, the aerospace and ship and boat building sectors account for nearly a quarter of the region's exports by value. Agri-food, on the other hand, figures in the top 10 thanks to arable farming and livestock production, along with meat and meat-based products, but to a lesser extent than one might have imagined, given the importance of this sector in the region. "The export level among the region's agri-food companies is relatively low, 11%, compared to 19% nationally, and 30% in the industrial sector generally. With the exception of market leaders which are already active internationally, they aim essentially at the national market," the observatory notes.

In general, the region has made export development a necessary condition for assuring the region's economic health in the long term. 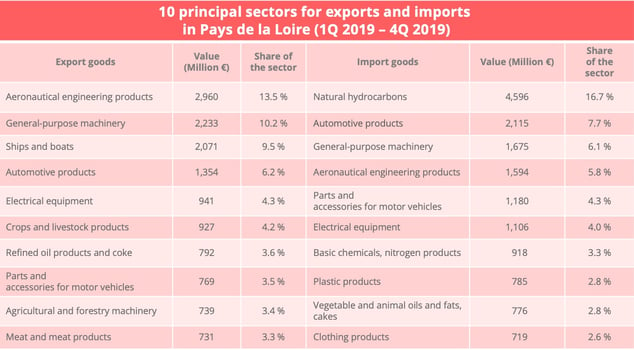 In its 2017-2020 plan for economic development, innovation and internationalisation in the region, the region sets itself the target of serving as an "aircraft carrier" for export companies in close collaboration other local authorities, while, at the same time, opting to concentrate on certain geographical areas - short distance exporting to Europe and the Maghreb for new exporters and long-range exporting in Asia, West Africa and North Africa for more experienced companies.

Europe is the region's main trading partner, as it is for all French regions. Germany is in a key position both for imports and exports, notably via the aviation industry, which also explains why the United States is in number two position for exports. As regards imports, in addition to China, Russia and Nigeria are among the region's top 10 suppliers by virtue of their role as exporters of oil and gas products. 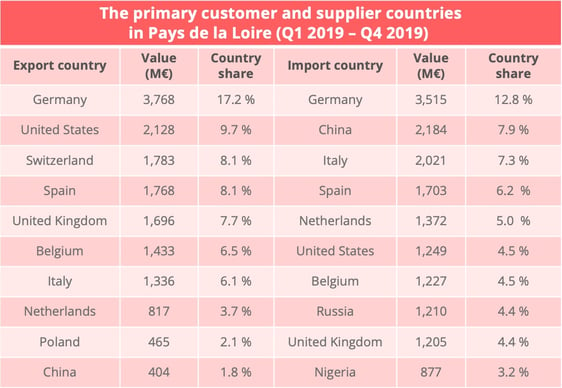