Poland: a prominent place in the transport and logistics sector

DOSSIER. Poland has risen to join the top 25 economic powers in the world, by using mainly European funds to develop its infrastructure. Upply presents a series of articles on this country which has hoisted its colors above the field of European road freight transport, and now has new logistical ambitions.

To start this series of articles on how Poland has positioned itself in the transport and logistics sector in Europe, it is interesting to take a look at its overall economic situation. Since the fall of the Berlin Wall on November 9, 1989, the Eastern European countries behind the “iron curtain” have experienced a transition to a liberal model. In particular they have experienced significant economic and social development, following their integration into the European Union between 2004 and 2007 (2013 for Croatia).

Poland has been particularly successful in its transformation. It is now one of the top 25 economic powers in the world. After more than 15 years of uninterrupted growth, the Polish economy was still showing a growth of 5.1% in 2018, while the European average was +2%. 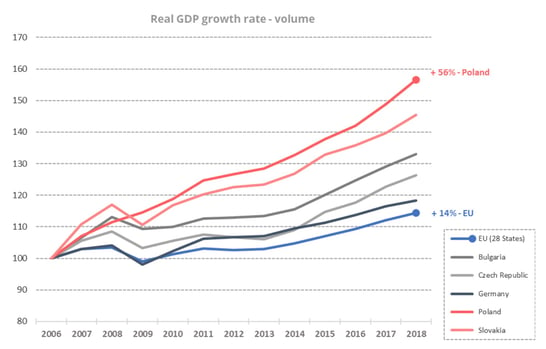 With a population of 38 million and an area of 312,679 km², Poland concentrates in its capital Warsaw almost 9% of its total population with almost full employment (the unemployment rate is 3.9%). GDP per capita was € 12,920 in 2018, with an average increase of 6.8% per year since joining the European Union.

The ingredients for success

The success of the Polish economy is based on strong links with the German economy, a driving force in Europe, and a strong sectoral diversification effect. In fact, Poland has benefited from a skilled workforce with a low hourly cost: it has thus experienced significant growth in its industrial sector. At the same time, the country is also engaged in a complete transformation of its agricultural system.

This economic transition has been made possible by massive investments from Europe: nearly 200 billion euros (€ bn), of which more than 25% was in the infrastructure sector. For over 15 years the EU structural funds have accounted for almost twice the annual Polish budget. This windfall has notably enabled total modernization of the motorway, airport, telecommunications and internet networks. In the period between 2014 and 2020 alone, Europe supported 24 investment programs, for a total of € 86 billion, or € 2,260 per inhabitant. 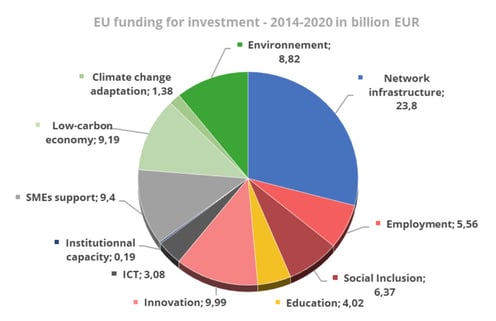 Today, the investment phase is bearing fruit because national growth is supported by strong domestic demand. The banking system is stable and the economy diversified. Inflation is under control and the growth prospects remains high, even though the pace should prove to be slower over the next few years (a growth of 3.8% estimated for 2020 by the OECD and +3% for 2021).

The quality of Polish economic governance is demonstrated by the real commitment of European investments in projects that have profoundly modernized the country and a level of State indebtedness that is under control. Public debt was at 48.9% of GDP in 2018 with a reduction targeted at 45.6% for 2020. The stability of public finances is confirmed with the long-term rating of A- by Fitch and A2 by Moody's, associated with a stable outlook. The public deficit was reduced from 2.2% of GDP in 2016 to 0.2% in 2018.

An economy that is slanted towards exporting

Poland's trade balance had been in surplus since 2015, mainly thanks to exports to European countries such as Germany, which is its largest partner. But in 2018, the trade balance turned out to show a deficit of € 4.9 billion. The country imported goods for a total value of € 226 billion and exports for € 221 billion. In particular the trade deficit with China has widened: it increased by 31% between 2015 and 2018 to reach € 24 billion. 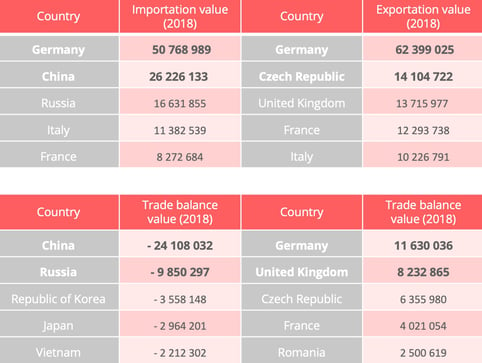 The development of the Polish industrial sector has made it possible to reach an average annual growth rate for exports of 7.52% since joining the European Union. The sectors experiencing strong growth in 2018 were construction +17.3%, finance +11.4% and transport +9.3%.

The road freight transport sector has undoubtedly become one of the flagships of the Polish economy. The country is now Europe's leader in international transport. In addition, a comparative analysis based on the total freight transport in tonne-kilometers terms, shows that Poland ranks as Europe's number 1 and is characterized by the predominance of its cabotage activity. 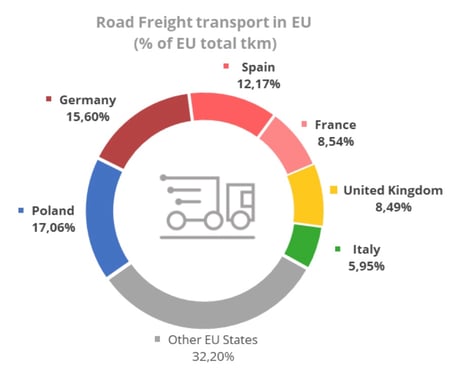 Source: Eurostat
Unit: tonne-kilometer (tkm); this unit of measurement corresponds to the transport of one tonne of goods over a distance of one kilometer.

Poland's geographical location makes it an interesting crossroads for the transit of goods, at the crossroads of the Amber and Silk Roads. Poland is at the barycenter of the North-South corridor from the Baltic Sea to the Adriatic Sea and of the Eurasian transcontinental corridor, which crosses Europe from East to West. The latter could be strengthened with the establishment of new Chinese (commercial) strongholds in Europe through the development of the Belt and Road Initiative. Chinese factories do need to have access, at low transport costs, to a mature and large consumer market. The European Union, with its 500 million inhabitants and a powerful economy, ticks all the boxes. 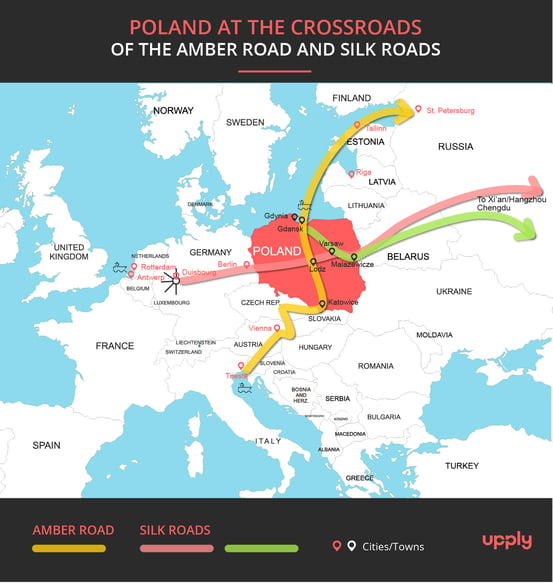 The country is tending to develop an infrastructure network based on interconnectivity, with not only road but also rail components, thus joining the European Union's strategy of creating an efficient transport network covering all 28 member countries. The aim is to develop European competitiveness by promoting the modernization of infrastructure, by boosting cross-border activity and by the creation of a multimodal network, while reducing the environmental impact and CO2 emissions.

The main challenges for sustainable growth