Rethinking the Congestion in the China-Europe Railway

The Asia-Europe Railway has been in the limelight since the outbreak of the pandemic, with a sharp surge in freight volume during the past eight months. However, this success is now hampered by its level of congestion.

In the past eight months, the volume of freight (TEUs) via the Asia-Europe railway increased by 49.3% on a year-on-year basis [1]. However, during the summer period, shippers faced a serious challenge on this lane: congestion. The problem mainly occurred on westbound shipping from Asia to Europe. According to the Eurasia Rail Alliance Index developed by “United Transport and Logistics Company – Eurasian Rail Alliance” (UTLC ERA), the average transit time from China to Europe has shown a significant increase since June (figure 1). 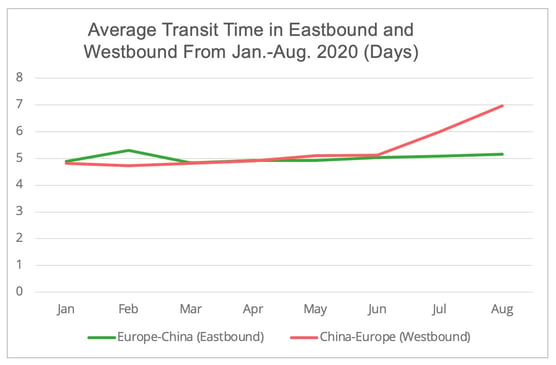 From the end of June to mid-July, severe congestion occurred at the China-Kazakhstan border, in some extreme cases with more than a 2-week delay. As a result, in June, the Chinese National Railway Administration ordered Chinese carriers to cut capacity, mainly on the newly added lines for cargo heading to Europe and central Asia in order to restore the flow. It has recently been reported that there has been some relief to the congestion in Alashankou.

The increasing backlog further up the line added to the difficulty in meeting demand for capacity already encountered at the Polish/Belarus border town of Małaszewicze, resulting in additional congestion in mid and end August. Congestion at Małaszewicze, which handles around 90% of railway cargos between China and the EU, has been an issue in the Eurasian rail freight for years.

As an instant response, shippers and forwarders are seeking alternative routes to bypass the congestion point. To avoid Małaszewicze, the short-sea shipping route between Kaliningrad and Rostock has gained in popularity. Four months after the launch of the route in April, the export of containerized volume from Kaliningrad has doubled compared to last year (figure 2). However, for the moment shipping volume via this route remains marginal, and its cost is also reported to be higher than via Małaszewicze. 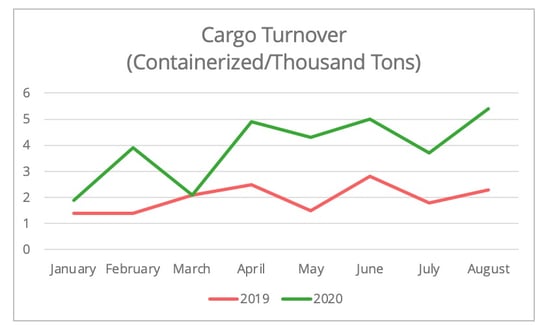 Reasons behind the congestion

Overall, congestion is an outcome of two factors.

The eastbound demand can be more fragile than that of westbound. Not only is the volume westbound larger due to the China-EU trade structure, but also there is a political drive behind westbound shipping. Based on the analysis of the structure of goods shipped eastbound via rail freight (figure 3), we see a mixed picture. 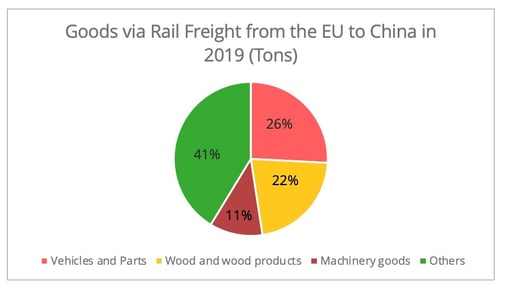 On the one hand, the gloomy Chinese market for imported automobiles, the largest part of eastbound shipping, casts a shadow on its long-term vision. The automotive sector is among the industries that are the most affected in the pandemic. For the moment, the Chinese market for imported automobiles is still struggling to recover. According to the Chinese Automobile Dealers Association, from January to July 2020, imported passenger automobile retail plummeted by 20.4% compared to 2019.

On the other hand, potential growth may be seen in some other sectors.

Of course, a more balanced pattern of shipping in both directions cannot be achieved overnight. As a result, other strategies have been initiated to address westbound congestion. For instance, UTLC ERA implemented a reduced tariff for eastbound shipping of empty 40-foot and 45-foot containers as part of regular trains, hoping to reduce the container shortage for freight leaving China. Also, starting from July, China launched a “digital port” pilot project aimed at enhancing the degree of automation in railway freight to facilitate shipping.

[1] Calculated based on the data provided by the Chinese National Railway Administration.