The road transport market in France is trending downwards in October, with prices down by 1.15% compared to September. In this France's transport sector is mirroring the changing business climate, which has lost 0.8 point in one month.

It was to be expected, sluggishness has taken over France's transport, despite a few weeks of resistance. This is now the end of the price consolidation period that we have been observing since July and that came to an end in October.

When we look at the evolution of the price index curve in France, we can see that it is evolving in the shape of an M (see below). The first ascendant branch recorded its highest point in September 2018 (102.7). It then reached a low point in March 2019 (97.4), followed by a new high point (101.2) in June 2019, however this was down 1.4%, compared to the figures from September 2018. If the scenario repeats itself, the low point of the last branch should therefore be reached in 2020, at a few points lower than March 2019. 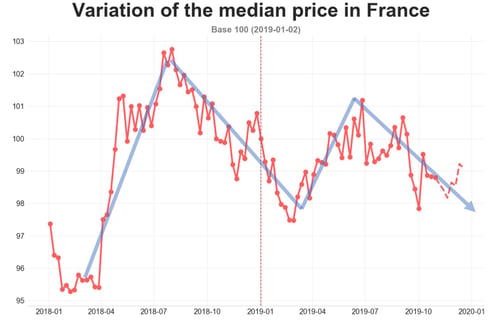 Road freight transport in France has entered into a recession. This confirms the echoes that we have been hearing from the marketplace. Freight demand is declining and the lack of drivers is losing its impact. Carriers are adopting a defensive strategy by keeping a hold on their cash and drastically reducing orders for new trucks and trailers.

Some however, are managing to take advantage of the situation and are maintaining an offensive strategy via acquisitions: for example, in October the Blondel group announced the acquisition of the carrier Regis Martelet (based in Dijon - 170 vehicles). This is just one sign among others that there is a movement towards consolidation that should continue over the coming months.

2 / Focus on the Nouvelle-Aquitaine region

Nouvelle-Aquitaine is continental France’s largest region in terms of surface area, with more than 84,100 sq km. Connecting the towns of Loudun (86) and Hendaye (64), which are on opposite edges of the region, represents a journey of more than 500 km, almost the equivalent of Loudun-Lille (530km) or Hendaye-Madrid (475 km)!

The graph below shows the change in the inward (import) and outward (export) transport prices in the region: 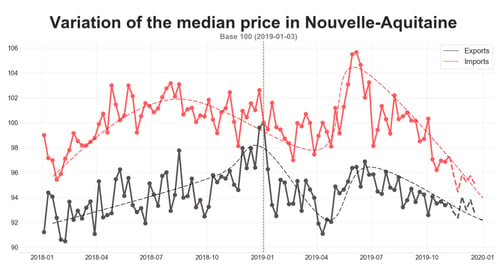 Spanish cabotage plays a big role here because distances are large, and it's a route back home. The Spanish therefore influence the price of import flows. On the other hand, the outward flows are dealt with by local carriers, which explains why the phasing of the variation corresponds more closely to the general French flow cycle.

In summary, this region is a natural link between, on the one hand, the more industrial and more populated northern France and on the other hand Spain. Price inflation is greater when there is a growing economy. However, in times of recession, the viability of the situation can become difficult for local carriers. As such, it is expected that there may be some business buyouts in Nouvelle-Aquitaine. As it happens this is already the case in the Midi-Pyrénées and Roussillon areas: the Transports Pedussaut was bought up by TDLM and Jumilla & Fils by the Socafna group. In the Gironde area, the Transports Guyamier has just acquired the Transports Lacassagne.