The French road transport market remained stable over December. The magic of Christmas has failed to reverse the downward trend observed in recent months. Over one year, transport prices fell by only 0.3%, but this decline is likely to continue.

Gloom has now settled over the world of French road freight transport. December is usually a time when transport prices start picking up, driven by very strong Christmas demand. But as it had been in 2018, with the "yellow vests" protests, December 2019 has been disrupted by strikes against pension reform. A context that has affected the morale in households, has lowered tourism in the Ile-de-France region and, in turn, erased the seasonal rebound in transport prices before the holidays.

As the graph below shows, prices remained stable through December with an index of 99.42 (-0.01% compared to November). 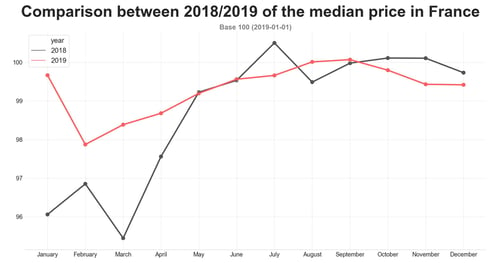 Diesel prices, on the other hand, are increasing: +1.4% over 1 month (see the main indicators at the end of the article). This trend directly translates into cost increases for carriers, and price stability confirms the current difficulty in passing on these increases. There is therefore a stall in economic activity, resulting in an overcapacity of transport in France.

If we consider the year as a whole, our Upply database shows that 2019 transport prices are 0.6% higher than those observed in 2018 on average. The trend was clearly inflationary in the 1st half of the year (+1.5%), and as a result, driver shortages were a central concern. This trend was reversed in the second half of the year (-0.3%) and the lack of drivers now appears (falsely) behind us!

Under these conditions, the financial balance sheets of French carriers are not expected to deteriorate too much in 2019 thanks to an average price increase over the year offsetting higher costs.

The year 2020 unfortunately appears darker. At the end of December 2019, the median price of transport fell by -0.3% over 1 year in France. At the same time, according to data from the CNR (National Road Freight Committee), the 1-year increase in the cost of diesel reached 3.4% and that of the Long Haul Overall Artic indicator excluding diesel, was of 1.2%. The combination of these intersecting factors is a harbinger of deterioration in the carriers' profit and loss accounts in the first half of the year.

The economic situation is not entirely encouraging either. The news is particularly bad across the Rhine, due to the crisis in the automotive sector. The possibilities for recovery are therefore slim.

It is reasonable to assume that all these factors will combine to further consolidate the road freight transport sector in 2020.