Our monthly Upply French road transport barometer reveals that the fall in transport prices has hit the PACA region hard in January. This can be seen as the resulting impact of the blockade of French ports which seriously affected Marseille-Fos.

At a national level, the prices of road freight transport in France were still trending downwards in January 2020. They lost 0.7% in one month and more than 1% in one year. Prices seem to be aligned with the business climate (-0.5% over 1 month). The 0.5% increase in diesel fuel prices in January is therefore very difficult to pass on.

The diagram below shows the weekly variation in transport prices in France based on UPPLY data. 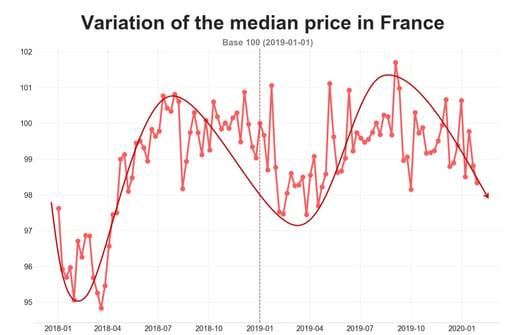 The cyclical aspect of the decline seems to be taking shape again this year: the first quarter is generally synonymous with contraction in demand from the construction and consumer sectors. It is therefore likely that the fall will continue over February and March and that prices will drop below the lows observed in 2019 due to negative external factors: transport overcapacity in Europe, social unrest in France and the Coronavirus crisis.

Focus on the PACA region

It is in the South East of France that the crisis seems to be the worst. Prices in the region fell by 3.2% in January. Returns to the Hauts-de-France are down by 5.3% and those to Aquitaine -12%.

The blockade of the port of Marseille-Fos cost € 270 million in two months, according to Actu-transport-logistique. The president of the Provence-Alpes-Côte-d'Azur region, Renaud Muselier, has also offered € 3 million in aide to companies working with the port.

As a result of the blockade traffic flows were diverted to the ports of Barcelona and Genoa, which recorded traffic increases of more than 90% and 25% respectively according to the "Journal de la Marine Marchande", which dried up transport demand.

The repercussions were multiple, for example during the winter sales : 74% of the traders of the region were disappointed by the results and 76% noted a decrease in their resulting cash register compared to the previous year's sales.

All these elements corroborate the results of the survey of the impact of the social unrest on businesses conducted by the FNTR, which shows that the West and the PACA region are the most affected areas. We note, in addition to the reductions already mentioned, a significant drop of 8% in January for freight rates between Le Havre and the Hauts-de-France region according to the UPPLY data base.

The situation is very alarming: the margin squeeze resulting from a sudden drop in rates and a continuous rise in diesel fuel at the pump is likely to be a blow to the chin of many cash-strapped businesses. There is an urgent need to support those most at risk as underlined by Jean-Christophe PIC, president of the FNTR.