Road transport prices in France rose only very slightly again in September 2021, according to our Upply barometer. A situation that is likely to be transitory given the shortage of drivers and the inflation of energy prices.

Following 2020, a year that was impacted by the health crisis, this September the economy continued the rebound that had begun at the beginning of the year, but in an environment that is still unstable. Inflation is on the rise again with the explosion in energy and commodity prices. In addition, recruitment difficulties in certain sectors, including road freight transport in particular, are likely to fuel demands for wage increases. Finally, the supply disruptions have begun to be felt quite distinctly.

For the moment, this uncertainty does not have too much of an influence on the evolution of road transport prices, which rose by only 0.2% in France in September compared to August, as revealed by our Upply Freight Index ( UFI Road France). On a year-on-year basis, however, prices were up by 3.5%. 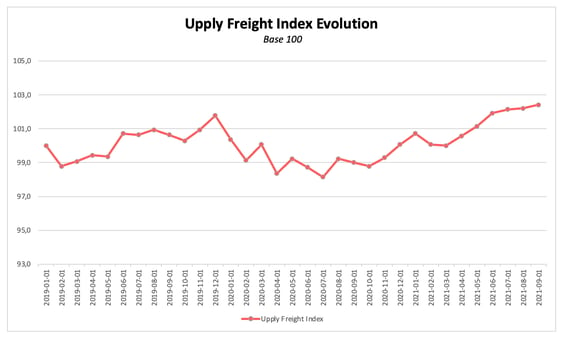 The current plateau on which the Upply Index (UFI) of road transport prices is situated may well be only a first level. Indeed, the shortage of drivers in France is likely to worsen if we take into account the increase in transport flows. Our just-in-time consumer patterns, boosted by the increase in e-commerce, are fuelling the demand for transport and the need for drivers.The season for tenders that is now beginning should be marked by increases, albeit much more moderate ones than seen in international transport.

Subscribe to the Upply Freight Index Road France for free