Road transport prices driven up by fuel in January

MONTHLY BAROMETER. Road transport prices in France increased again in January 2022, as indicated by our Upply barometer. Costs are soaring, in particular that of fuel, which is now the primary cost item for carriers.

The month of January was marked by the gigantic spread of the Omicron variant, with several hundred thousand cases detected per day. However, the French economy has finally resisted this new wave of Covid-19 quite well. Activity has certainly declined in the services sector, following the evolution of the health situation, but it has increased slightly in industry, due to the positive growth in order books.

A business climate that deteriorated yet again

In January 2022, the business climate in France deteriorated further, mainly due to the continuing deterioration of the general outlook in services, indicates the INSEE. The indicator has dropped by two points. At 107, however, it remains quite clearly above its long-term average (100).

Business morale in the services sector continues to decline as the general business outlook is less favourable here. In wholesale and retail trade, the business climate is also slowing down. This is also the case in construction, but with an index that remained at a high level despite having retracted slightly. Tensions on the productive apparatus remain intense.

Conversely, in industry, the business climate is improving, driven by the growth in order books and the slight improvement in the supply situation. According to the Bank of France, in industry as a whole, the production capacity utilisation rate fell slightly, from 80% in December to 79% in January, pulled down by the automotive industry (64%, following 69% in December). But it is above its historic average in most industrial sectors, with the exception of automotive (-8 points) and aeronautics and other transport (-7 points). “The balances of opinion relating to production indicate good progress in January for the agri-food industry, the chemical sector and the equipment sector (computer, electronic and optical products, electrical equipment, and machinery and equipment)“, specifies the business survey from the Bank of France.

This rather resilient economic context, given the health circumstances, has helped support activity in road transport. Prices increased by 0.6% in January 2022 compared to the previous month according to the Upply Freight Index (UFI Road France), recording a sixth consecutive increase. 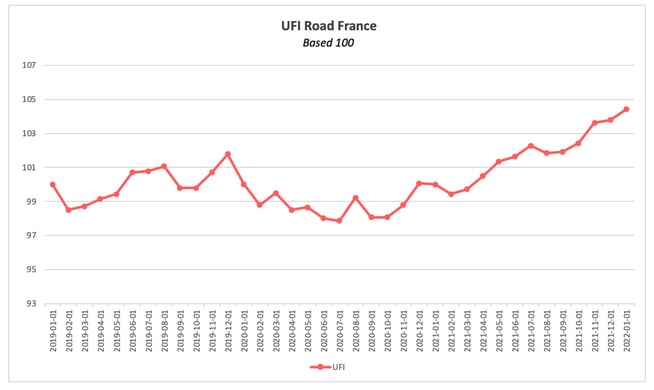 Overall, transport prices in France have been on an upward trend since February 2021, with a small slump during the summer season. Year-on-year, they show an increase of 4.41% according to our Upply Freight Index barometer.

Even if this increase had been expected, given the economic situation, it should be noted that the month of January is traditionally a period marked by a drop in transport prices compared to December, as activity picks up slowly after the Christmas break. Transport supply is usually greater than demand at this time of year, which pushes prices down. We find the trace of this natural trend with the UFI Spot Road France indicator, which measures the evolution of spot rates in France.

Please enter your details below to download the whitepaper: