Road transport prices: the significant but relative effect of oil

By using the Upply barometer of road transport prices in the French market, in an approach that is complementary to the cost indexes published by the CNR (National Road Committee), let us examine the mechanisms that are at work in the final fixing of transport prices.

During the period of January to April 2020, the price of Brent fell by 70%. At the same time, the Long Haul indicator published by the National Road Committee (CNR), which measures the evolution of the costs of general road freight transport over long distances carried out by articulated trucks up to 44 t, shows a much lower downturn: - 6%. As for the prices of road freight transport (RFT), they fell by only 1% during this period, according to the Upply barometer which measures the evolution of median prices.

There is therefore a correlation between fuel and the costs and prices of transport. But the lessening of its effects that can be observed shows the existence of other mechanisms entering into play before the final price is fixed. 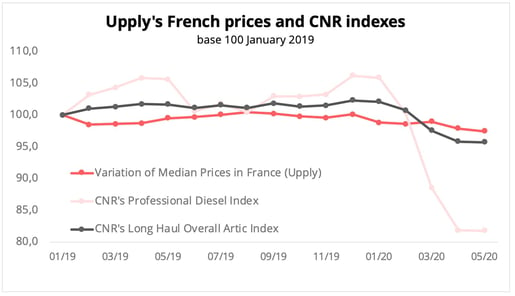 Between the cost of a barrel to the cost at the pump, the fall in the price of raw material is "cushioned" via exchange rates, refining, distribution and taxes before it effects fuel prices: crude oil represents on average 25% of the price at the pump in France.

In this way, between January and April 2020, the prices at the pump and the CNR professional diesel index fell by 17.4% and 22.7% respectively, while Brent plunged by 70%.

In the same way that raw material is not the only component of the price of fuel, fuel is obviously not the only factor which influences the cost of road transport. It represents, according to the CNR, 24.5% of transport costs, which puts it in second place in the list of costs behind drivers' wages and salaries (27.5%).

The structure of total transport costs explains why the level of variations in fuel prices have a proportionally lesser effect on the fluctuations in costs. However, among the costs associated with road transport, fuel remains the factor that can experience the most frequent and largest shocks. This explains why the CNR's Long Haul index still posted its lowest level in April since September 2017.

The decisive effect of supply and demand

The Upply barometer of transport prices shows a drop of only 1% over the same period, indicating the effect of other mechanisms at work between cost and price.

First of all, the diesel indexation generally lags behind by one month, which creates a disparity between the price and the cost of transport. Moreover, the results of the supply confronted with the demand, obviously has an effect on costs and prices. Between February and April, there was a sharp drop in demand: the volume of transactions observed by Upply's partners and users fell by 40%. However, at the same time, the crisis caused a clear adjustment of the means of production, “around -32% in vehicles and drivers”, reported the CNR in its activity barometer for April 2020.

The Upply barometer reflects these developments: the magnitude of the fall in prices is therefore smaller than that of the fall in costs. During this very unusual period, shippers, faced with a fluctuating supply, did not look to ruthlessly negotiate prices, instead favoring the guarantee of delivery of goods. 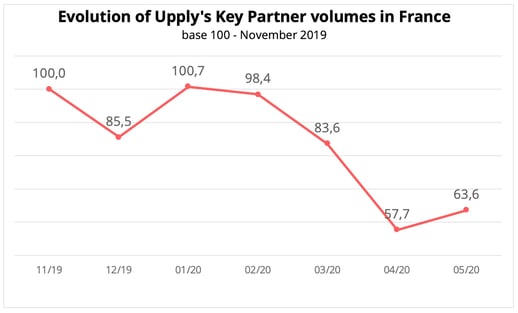 In May, the activity began to pick up and this was confirmed in June. “With a turnover growth of + 31% over one month, companies in the RFT sector are seeing their activity exceed pre-crisis levels (February 2020). Production factors and costs are also increasing, but in smaller proportions. On an annual basis, the levels reached are comparable to those of June 2019 ”, reports the CNR activity barometer for the month of June.

The National Road Committee indicates, however, that “the sector remains weakened by this crisis and in particular the important level of additional costs that it had to finance”.


Audrey Ribeiro is a Data Science consultant at Veltys, strategy consulting firm, in Economics and Data Science.
See all its articles

Transportation companies have every interest in embracing digital technology to improve their visibility and develop their commercial prospecting. Contrary to popular belief, this approach does not come at the expense of human interaction but can on the contrary strengthen it. Digital technology is ...
Thomas Larrieu
4 min

Digitalization in business: where to start

Beyond the hype, digitalization is a real source of efficiency and automation of low value-added tasks. Businesses in the transportation and logistics sector have a lot to gain from this, both administratively and commercially. Digitalization has become a hot topic and a bit of a catch-all. It would...
Thomas Larrieu
7 min