Road transportation prices in France rose by 1.7% in November according to our monthly Upply barometer. In a semi-confined economic context and with declining volumes transported, this increase is more the result of a change in the nature of transportation than a sign of a real recovery in the market.

The transportation price curve in France shows an increase of 1.7% in November. This surge, which occurred in the middle of the second lockdown, surprised the specialists who were expecting a new downturn. For example, the newspaper Les Échos in a November 19th article, forecast a recession in prices and volumes on the basis of a survey of transporters carried out by the consulting firm BP2R. 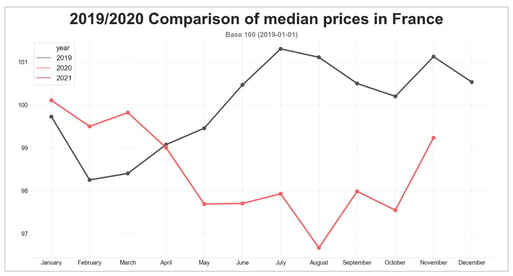 Several red flags have been raised. In November, the business climate fell by more than 12 points compared to the previous month, and by more than 25 points over 1 year. Admittedly, the situation is less calamitous than in April when the drop was more than 40 points from one month to another (-51 points over 1 year), but it still reflects a significant shock that is shaking the morale of business leaders and driving transportation demand downward.

We have seen a drop of 15% in transaction volumes recorded in France in November compared to October based on Upply's road freight rates. However, this very strong contraction in activity should be compared with that observed in April of 30% during the first lockdown, which showed a real collapse.

In terms of transportation prices, certain lanes which form the backbone of freight movement in France, such as those from the North towards Ile-de-France and from the East towards the River Rhone corridor, show price reductions over one month of 2.66% and 0.86% respectively. This shows that supply is greater than demand and this gap is driving prices down in conventional freight transportation.

In its November 17th review of business conditions, the INSEE estimates the drop in activity in both industrial and building sectors at 13% and a 15% drop in consumer activity compared to pre-crisis levels. Overall, the decline in economic activity is estimated at 13%, against a 30% drop in April.

The rise of e-commerce

How do we explain the overall increase in road transportation prices on the French market in such a context ? The price of diesel could be considered to be a factor of increase, since it saw a rise of 1.2% over one month. However, as this factor represents only about a quarter of the total cost of transportation, its impact is limited to 0.3%. The variation in the price of fuel is therefore not the main cause of the price increases.

The explanation is to be found more in the nature of the transportation flows. “The study of the aggregated amounts of CB bank card transactions shows several differences with the first lockdown and confirms the adaptation of consumer behavior: online sales soared from the start of the second lockdown, while they were flagging at the end of March and precautionary purchases (food, fuel) were not as massive as during the days preceding the first lockdown”, indicates the INSEE's review of business conditions of November 17.

This increase in e-commerce is visible across the country, in both urban and rural areas. At the national level, La Poste is seeking to recruit 9,000 seasonal workers to respond to the increase in its parcel distribution activity. At the regional level, in Vannes for example, La Poste confirms that it is facing a 30% increase in volumes. The newspaper Ouest France reports that in Nantes DHL has seen a phenomenal rise in volumes during the crisis and will face a continuous growth of 8% per year until 2025.

However, in our Upply barometer, we saw a 5.75% increase in transportation prices in November alone in the Ouest Region and a consequent decrease in the average number of kilometres transported.

Change in the "transport mix"

E-commerce logistics leads to a fragmentation of transportation into shorter journeys. As a result, the average cost per kilometer increases because the distance travelled decreases.

In November, the distribution of transport changed profoundly in favor of shorter journeys and higher kilometer costs, which had an inflationary effect on average prices in France.

However, this effect has only an arithmetic impact and does not provide any comfort to carriers outside of the distribution of small packages.