For two years, we have seen a slow but inexorable reduction in ex-Europe ocean freight rates on the Rotterdam/Ningbo route. The cause is overcapacity.

Capacity offered is much greater than demand on the Rotterdam/Ningbo route. This is the principal cause of the fall in freight rates seen on the route. The repercussion of "blank" import sailings on exports has slightly corrected the market but without any longer-term effect.

The use of combined rail-road transport ex-Europe to China via the Silk Roads is becoming an interesting alternative: door-to-door prices are virtually the same as in the maritime sector but with a 50% gain in transit time.

The shipping companies on this export route calculate profitability on a "better than empty" basis, working on the principle that the equipment concerned needs to go to Asia in any case to meet demand for exports of manufactured consumer goods.

If the rates fall further, some companies could be forced to cease marketing export services. Notwithstanding the psychological effect this would have on markets, it would be more profitable to send back empty containers without any associated marketing costs.

A technical recovery in the market can nevertheless be expected at the end of the year. The impact on exports of the large-scale cancellation of port calls during Golden Week, coupled with the introduction of low sulphur charges as the date for the introduction of the IMO regulation approaches, should normally stop the bleeding temporarily. 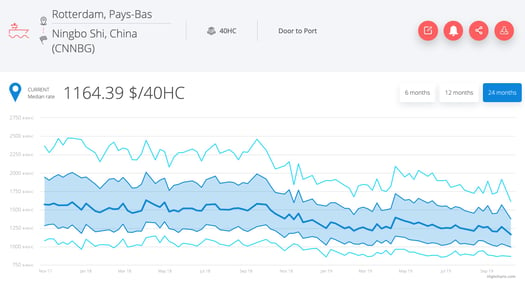